Photo by Jim Leatherman Bad magic: Photos from Motorhead, Anthrax and Crobot at House of Blues

Lydia Lunch, of all people, did a tour of Orlando recently. As a major figure in the NYC scene in the late '70s – back when there was a true, paradigm-shattering frontier there – her name is engraved in some of the American underground's most venerated halls. To launch the Orlando run of her exhibition So Real It Hurts (Gallery at Avalon Island, through Oct. 9), she did a talk and some performances downtown, then appeared at a special dinner inspired by her cookbook at Maxine's on Shine.

While Art in Odd Places made downtown an urban wonderland outside, the undertow of Lunch's spoken-word performance inside (Sept. 18, Gallery at Avalon Island) was a descent into the viscera. Framed and punctuated by Weasel Walter's punk-jazz drumming and electronic noise, Lunch bled verses as raw as the life from which they were cut. Through all the scars and exposed nerves is a heart that still beats hard. Sometimes confrontational, sometimes wounded, but always game, this is a lifer who still looks to both take and dish out even more lacerations. It was an intense encounter that constantly threatened the space between performer and observer. Words were often more thrown than enunciated, and some audience members became targets of Lunch's penetrating gaze.

Yes, Orlando was a little bit more special with her around.

The Lemmy health scare that forced Motörhead to cancel dates trembled the music world. Such was the specter looming over the Orlando date (Sept. 25, House of Blues). If they make it here, could it be their last time? We were all thinking it. Unlikelier things have happened than an aged, hard-living rocker going tits up. Perhaps that sentiment drove a sellout crowd that seemed bigger and hungrier than before. They made it here, and the old boy lasted the whole show. So God exists, and he's a Motörhead fan.

Motörhead performing not particularly excellent live isn't the letdown it would normally be. They were once famously named the "Best Worst Band in the World" – via poll, no less – in NME, after all. So, sure, it took their legend to fill in some of the gaps. But that's the credit you earn when you're Motörhead. This time especially, though, getting to bask in Lemmy's halo one more time is really enough.

We're all rooting for you in this lifelong game of chicken you're running with fate, mate. But you can only play Life for so long, and Death is undefeated. All we can do is enjoy the ride while it lasts. So go on with your bad self, Lemmy.

In an extended comeback campaign filled with lots of notable happenings, local roots-rocker Mike Dunn has finally capped it with the official release of his latest full-length and a mini Southeast tour with likeminded big-name indie-rockers the Damnwells. For the special Orlando event (Sept. 24, Backbooth), Dunn and his band performed the new album in its entirety live, which was an excellent way to experience it.

As the title practically admits, Hard Luck Soft Rock doesn't have the blinding exuberance and bite that made his 2007 debut, The Edge of America, essential and an instant classic. Dunn's a grown man now and conducts himself like a wholesome 32-year-old should. But, really, this is where he was headed the whole time. I mean, the dude was already reminiscing about lost youth and singing about "getting older" on his debut record at the wise age of 23. Despite a little gooey balladry, Hard Luck is a return to form. Dunn's heartland-style rock has always been best when he goes big with wide open anthems, and he does it with enough frequency and verve here to suggest he's aging with dignity.

Without an oblique bone in his body, Dunn's as straight of an arrow as they come. For this most earnest of men, it's more about heart than art. Being straightforward, however, is never a bad thing when you fly this true. Like gazing upon an Orlando sunset, it's awfully nice to be back in Dunn's golden rays again. 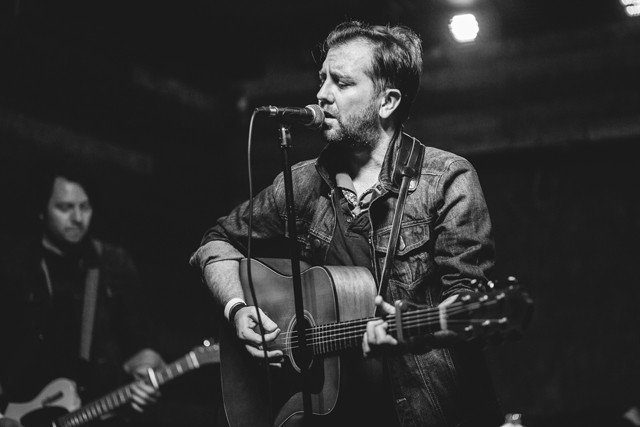