This Little Underground: Meat Puppets still a revelation after 35 years

Photo by Jen Cray Up on the sun: Photos from Meat Puppets at Will’s Pub

The truth about Meat Puppets (Oct. 28, Will's Pub) is that I've never really been into them. I walked into this show with academic esteem for them as an original force of the American underground but, frankly, not much personal passion. That completely changed by the end of their opening song.

In that room, something about their outlandish country-punk scramble suddenly clicked. They were adventurous, virtuosic and kooky, all without being shambolic in execution (to their credit) or effect (to my surprise). And Curt Kirkwood's guitar technique is a marvel that's somehow as soulful as it is searing. But there's no better review – no greater testament to their enduring virility – than noting that Meat Puppets still have the goods to make you a believer. Even after 35 years, they have enough live flash to be revelatory. After finally experiencing them, I have new perspective and, perhaps most importantly, new interest.

Also worth mention is opener Tight Genes, an Orlando band that deals in music that's smeared and furious. Even with occasionally melodic moments and frequently lighthearted lyrics, there's a genuine sneer propelling everything. This isn't punk in spirit or theory. This is unfiltered, real-deal punk rock that impresses with velocity and detonative power.

Across releases on Sub Pop and Alive Records, Alabama's Lee Bains III & the Glory Fires (Oct. 29, Will's Pub) are shaping up to be one exciting prospect. Lately, they've been redlining their Dixie soul and riding a bolt of boogie and blare. Bains and the boys do Southern rock the way Jon Spencer & the Blues Explosion do the blues: jacked, cranked and crackling. And that combination of heart and blister left an impression like a branding iron in their Orlando debut. It's the most refreshing, convincing and punk take on Southern rock to come along in a very long time. 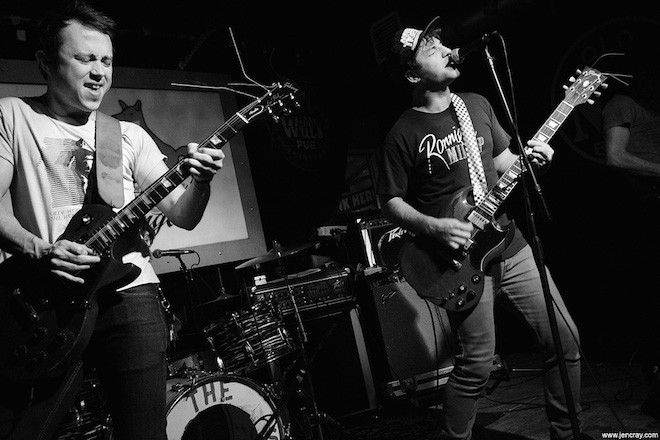 For something that started out without a master plan, Chris Belt's Accidental Music Festival has sprouted some impressive legs. Now in its fifth year, the Orlando series has become a defining player in the area's contemporary and avant-garde music scene by daringly championing the arcane world of new music beyond the carousel of pop and rock.

To launch the season, AMF brought in heavyweight New York group Yarn/Wire (Oct. 29, Plaza Live) to perform a program of current works by Steve Reich, David Bird, Sam Pluta and Joseph DiPonio. This quartet isn't about being good young practitioners of an old form. They're part of the new classical vanguard, true artists who are taking their considerable formal skills and pushing them beyond the ivory box.

I've seen many cool and unusual arrangements, but never an ensemble of two percussionists and two pianists. Really, though, they were much more than that. For starters, their interesting rig is an extensive and dynamic one ranging from classical instruments to an array of devices suited for a sound effects studio. Even with the traditional instruments, their use and manipulation of them was often experimental. And the performance was an evocative one of enveloping, magnetic atmosphere.

When you watch a piece whose climax is built by three of them huddling over a single piano tugging at its entrails – as if disemboweling a beast, the beast of orthodoxy perhaps – you know immediately, unequivocally that this ain't your granddaddy's chamber music. This is truly new music that's on the frontier of expression.

But there was something else exceptional about the show. Unlike what some might expect from a high-art concert, this was neither stiff nor exclusive. The players provided lots of foreword and background of the featured material and even their methods, some of which were pretty inventive like using toy bouncy balls as mallet heads and fishing line tied to piano strings. In short, they don't assume you're already in the know. They gladly fill you in to maximize what was designed to be a deep experience.

It was another reminder that, thanks to enlightened and enterprising groups like the Accidental Music Festival and the Civic Minded 5, Orlando's avant-garde music scene is sexier than you probably realize.