The story this week was an early peek at some exciting young bands – Milk Lines, Cobalt Cranes and Mantar – with both the substance and the positioning to make legit waves.

It's nice to see the King Khan & BBQ Show (March 23, Will's Pub) on the comeback road with their first new album in six years (Bad News Boys). Unlike the big soul explosion of the Shrines, this two-piece project is one of the rawest but brightest dots in the sprawling King Khan galaxy. Though their savage rock & roll is good, it's really meant to be experienced live – everything about them is. From their costumes – which make them look like screwy, perved-up superheroes in some sort of cracked universe – to their casually wild energy, it's just a lurid spectacle, of which the full glory can only be tasted in person. They're proof that with enough spirit and fucked sensibility, you can probably get away with murder. And murder is exactly what they did with a largely ramshackle set that not only worked, but scorched.

Even amid all that insanity, Montreal's Milk Lines was maybe the night's biggest surprise. They're new to exceptional garage-punk label In the Red, but they're no basic garage band, noble though that can be. They're much, much more, and you really hear it, interestingly enough, when they rein in the energy and let their impressive mood and atmosphere take the wheel. Their intriguing, pulp-perfect cocktail of garage, psych and Western vibes is a deliciously strange trip that could be a punk channeling of Nancy Sinatra and Lee Hazlewood. They're an original and very effective combination of forces, and a band to keep a serious eye on. 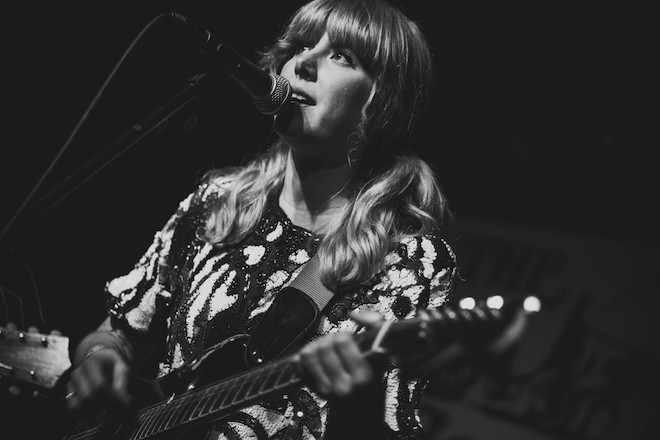 At their Orlando debut (March 25, Will's Pub), L.A.'s Cobalt Cranes proved why they're a diamond in the Lolipop Records mine. As a robust unit with two strong singers as front presence in Tim Foley and Kate Betuel, this is a very realized band with a chiseled vision. Although it's not entirely complete to call them a psych-rock band, it's definitely not inaccurate. Perhaps because they're really more than that, they don't just coast conveniently on aura, posture or nominal style signifiers to pass. No, their charge is led by decisive musical intent. There's plenty of alluring murk and atmosphere in which to swim, but it's powered by solid architecture and punctuation. This isn't just ambience, it's music – stout, seductive rock music.

As reported last month in Feedback ("Music updates from around town: Wet Nurse, Hourglass Brewery, Total Fuck Off II," Feb. 25), the Hourglass Brewery has recently entered the area live-venue derby with Saturday night shows, and the latest was a metal takeover by noted local heavy bookers Non-Prophet Organization and F.N. Hostile (March 27). The main reason I made the trek was German two-piece Mantar, whose debut album will see a stateside release this May via excellent Philly indie label Brutal Panda Records.

Metal is not a genre that duos have conquered for many obvious reasons. Mantar doesn't just manage the task, they ravage it by stripping the fat and attacking like a lean beast that's all sinew, claws and teeth. Like their approach, little about Mantar is typical metal – the Hammerhead hat on vocalist-guitarist Hanno Klaenhardt's head will tell you that. With DNA that's deeply stamped with punk, they're a black blast of metal and punk that achieves both heaviness and agility. And live, they're like coiled lightning.

There's not usually much musical reason to voyage out to Longwood. But from the way the Hourglass is shaping up, that could soon change. It's a clean, spacious, well-run joint as both brewery taproom and live venue. Most importantly for shows, there's a stage with real height – not some foot-high riser trying to pass – and dynamic LED lights.

The Hourglass stage is an immediate live boon to the north side, but it's also worth the drive if a decent band is playing, which is a possibility if their calendar continues its roll with upcoming notables like the Cook Trio (April 18), the Mud Flappers (April 25) and the Palmettes (April 25). So keep an eye on their Facebook page. Oh, and did I mention the shows are all ages and all free? Boom.