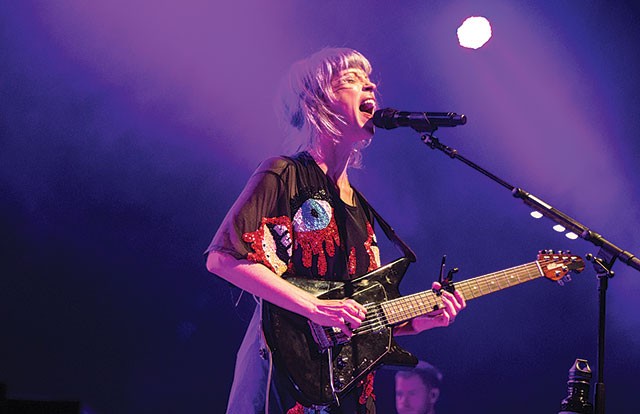 It’s turning out to be a historical season of unrest for Orlando nightlife. The worst new development is the possible closing of the Peacock Room. This story’s still unfolding, but it could happen as early as the end of this month. Unless something completely kick-ass replaces it, this news sucks.

The other major development is, right now, a huge question mark. Firestone Live is rebranding as Venue 578. It looks like they’re making a big, unified push toward using the entirety of their property – basically a city block – as a complex of venues and festival grounds, something they’ve been working toward quietly for years now. However, from what the venue tells me, the uses will be more varied (and rental) than typical nightlife events. What shape that’ll ultimately take remains to be seen.

It’s brightening to see that eccentric genius can still triumph above ground once in a while. Current case in point: St. Vincent is one of those pop phenomena that breaks big against all commercial odds.

Sure, she’s got one huge hook of a look. But even though image and spectacle are the stock in trade for some of the most supremely empty pop music, St. Vincent reminds us that this appeal can be in service of real art and not just a gilded surrogate. Because her avant-garde vision of pop and rock is interesting, her mark will endure.

When you manage to get big on these terms, it’s a rare position of privilege. With the freedom of an expected maverick but the big, sure footing of an establishment force, it’s the living ideal. You can get away with anything from here – shit that only icons like Björk and Prince can pull off.

Digital witness: Photos from St. Vincent at the Beacham

The grand trick, of course, is to get the public to buy into your thing, not an easy task when you’re doing something a little left-field. But now that she’s accomplished that, St. Vincent’s star power is so plain to see – and, as her scintillating Orlando performance (Oct. 7, the Beacham) testified, it’s blinding. Even as many of us have already caught on and are soaking in her glow, she’s one of those future-now artists whose reach won’t fully be measured for years to come.

As soon as St. Vincent signed off, I headed up the street for Insane Clown Posse (Firestone Live). This may or may not surprise you. To be honest, the thought to go – a last-minute whim – kind of surprised me. I definitely wanted to go, but not in the way that involves desire as much as curiosity.

Outside of their rabid following, the horrorcore duo has been consistently sprayed with a tsunami of derision that micrifies even their own famous Faygo showers. Though I have pretty well-calcified opinions on ICP’s artistic merit, I’ve never actually seen one of their notorious shows.

But for all the garish, tangible pageantry on display, the real power of the ICP experience is actually more of a social phenomenon than a visual one. I saw a guy who was probably in his 60s crowd-surf up to the stage, bask in it for a few seconds and then take a glorious dive. You are one sonofabitch misanthrope if you can hate on that.

From the juggalos’ reputation, you’d think the stain of their followers would nullify any possible ICP virtue in a way that perhaps only Jesus could relate to. Of course, there was lots of stupid-getting, but nothing out of the ordinary for a wild show. I’ve seen twice the assholery and half the show at tastemaking concerts. Frankly, the cultural experience of being on the floor among the Juggalos at what is in effect one of their church services was far deeper and more interesting than what was happening up on stage. But read our cover story this week for more on that.