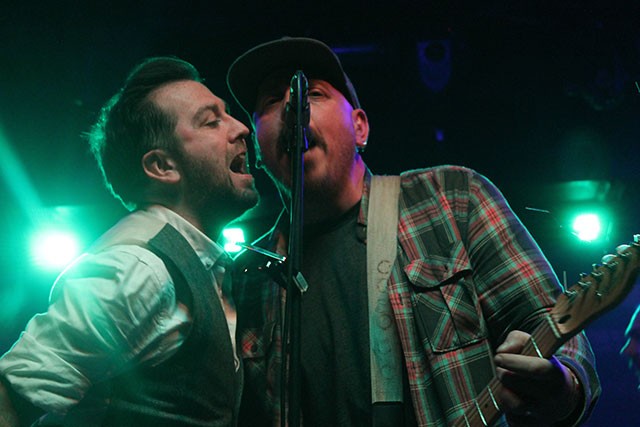 Seen those new, improved sightlines at Will’s Pub yet? They will be a boon at the next sold-out show.

This weekend was a heavyweight reunion of Orlando’s deep roots-rock class of 2006 with a bill that not only rejoined but reinstated two of the era’s kings: Gasoline Heart and Mike Dunn (March 14, Backbooth). GH principal Louis DeFabrizio relocated to New York, taking practically all of 2013 off from music, and Dunn was in creative exile for a couple years due to a combination of burnout, writer’s block and real-life pursuits. But as the Gas Heart song goes, you can’t keep a good kid down, and it looks like both are stepping back into the ring. DeFabrizio recorded new music in December and is back on the road looking to rev back up to cruising speed this year.

A reinvigorated Dunn holed himself up alone in a south Georgia cabin and wrote 10 new songs, which he’ll record this year with DeFabrizio, who produced Dunn’s magnum opus, The Edge of America. Now that last little detail is everything, and real reason to be excited about Dunn’s recorded return. Dunn’s a truly natural songwriter. But as the difference between that excellent, big-gunning debut and his follow-up 2009 LP (Sundowner) reveals, the right production framing can be the difference between pleasing beige and blinding deliverance. And DeFabrizio gave that first EP some balls. So stay tuned.

Both these acts were born to carry rock & roll’s classic shine, already channeling that glory-days glow when they were only fresh faces on the scene. Now, in the amber rays of a reunion before a packed house, this show was golden. Dunn looked refreshed on a handful of new songs with a full band, and Gasoline Heart swung for the fences with a powerful new lineup delivering the tightest set under this name in a while. But the fellowship and collectiveness between the two defined the night. It’s what made those bands and that time, and it was alive again.

Last summer, I told you about expansive Miami two-piece the Tunnel. Well, they returned and are now called Cave of Swimmers (March 9, Uncle Lou’s). But the singularity and adventure of their arty Latin metal remains.

Between bands, I checked in on the concurrent hardcore show headlined by NYHC legends Urban Waste up the block (Will’s Pub). I managed to catch Melbourne band Coldside, who unsubtly preach the tough-guy stuff but whose meathead hardcore packs an edge that’s more treacherously close to Limp Bizkit than anyone would probably admit.

But the night’s marquee destination, New Jersey’s East of the Wall, was back at Lou’s. The Translation Loss Records band came with their own lighting rig, which is a level of production and budget not usual for this venue. Then again, how many bands come here packing a drum rack system and three flame-throwing guitarists? Seldom is this much hardware ever necessary. But with super-technical progressive metal that actually utilizes every tendril of this elaborate instrumental network with expertise and virtuosity, they earned the right to every piece of it.

Although Baltimore’s Darsombra is an experimental cauldron of ambient, drone, psych and noise, the only thing you could guess about them from their hilarious promotional pics is that they are possibly wood nymphs, or some hippie facsimile thereof. So – good, bad, whatever – I knew this show would probably be interesting (March 11, Will’s Pub).

But inside the comical cover, there’s actually a transporting book. Live, it’s surprisingly easy to get past all the red flags with the impressive instrumental range of metal vet Brian Daniloski (Meatjack) on guitar and eight-string bass. Their recordings would probably require narcotic assistance to appreciate, but they explicitly bill themselves as an audiovisual act. And with the visuals of filmmaker band member Ann Everton, their live show is packed with multisensory intrigue. Unlike the impressionism of their music, the widescreen visuals – pattern exercises that are eye-tickling and organic in movement – were high-def and stunning. Taken together, it was a psychedelic vision quest that had the audience gathered around seated in a circle, as if bound by some spell-casting campfire.

And, heads up, I’ll be on column break next week.