Reviews of Lucero, Jonny Fritz, Me Chinese, the Welzeins, Turbo Fruits and more 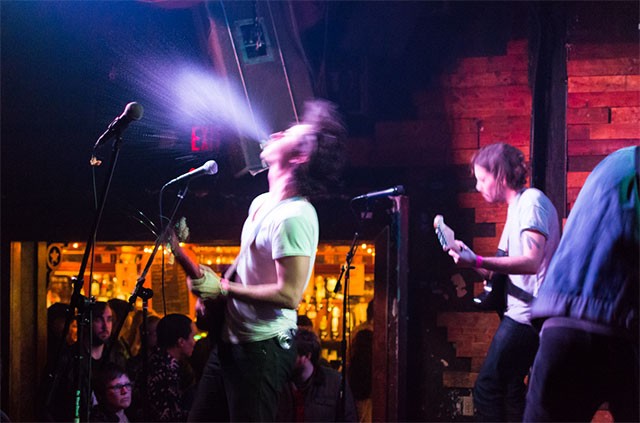 Even in a bonanza music weekend that included Against Me!, Lucero, Talib Kweli, Shinobi Stalin’s release party, the final Andy Matchett & the Minks show and Shew’Bird’s Nick Cave tribute, the biggest local-driven event was the two-day, four-venue mini-fest (Jan. 24-25) celebrating the third anniversary of Orlando booking group Norse Korea Presents. Aside from the current reigning crop of locals setting the usual pace all weekend, almost just as important were the pleasant surprises.

The opening night surprise (Backbooth) was my first encounter with local duo the Welzeins. They play rock & roll with garage fuzz, punk heat and even a little bluesy grease. It’s loud, excitingly headlong and smeared on thick. These boys got some octane.

Maybe you remember me mentioning Orlando’s Me Chinese not too long ago. Well, they’ve traveled some developmental miles since. These freaky psychedelic punks are still weird and fried, but they’re now notably more concrete, even fierce in their more concentrated moments. But don’t worry, they’re still in outer space. Besides music, their set entailed frontman Matt Kamm becoming progressively undressed (and then back again) and spouting strange stuff including how playing Backbooth may be bringing mortal misfortune to his family.

The night’s big headliner was Nashville’s Turbo Fruits, possibly the best Be Your Own Pet spin-off. Once they struck, it was clear that they’re a step above. For a band with true punk pedigree, they’ve become a heavy-hitting, lock-tight and deadly-effective rock & roll machine. And they’re proof that you can get good at your craft without selling your soul.

Night two (Will’s Pub and Lil Indies) yielded a couple revelations. The most realized was Ft. Lauderdale’s Sweet Bronco, whose deep, mature sound is a return to the stateliness of early millennial indie rock. They’re a well-crafted tapestry of nice melodies, sonorous reach and lots of atmosphere.

Atlanta dream-pop act Del Venicci, whose debut album releases Feb. 25, showed promise with some good music. But, though they sounded progressively better throughout their set, their effects-steeped guitars weren’t nearly loud enough to honor their shoegaze edge. And Lil Indies just wasn’t the right setup for such a texture-dependent band.

Noted Athens musician Richard Sherfey used to bring his accomplished, gospel-kissed country-rock through Orlando but doesn’t play out much since he moved to town and got into the craft beer biz. But he’s a real talent and his full-band appearance was a definite festival highlight.

Memphis’ Lucero (Jan. 23-24, the Social) has built their devout Orlando fan base from the ground up, ultimately hitting the big time in 2012 by playing the Beacham. But longtime Lucero fans, a big slice of their Orlando following, became hooked on not just their music but also their live experience. In our case, that’s a history of legendary sets that bring you in close and go all night. So, though I was pleased that this deserving band had graduated to the big room, that show lacked something that we’ve become really attached and accustomed to as one of the cities that boarded the Lucero train very early on and gave them a second home – in spirit and, for a time, in person for singer Ben Nichols. That’s why a two-night engagement at the cozier Social was a smart move to restore that essential intimacy. Nothing will compare to the old days, but it was good to feel some of the soul again.

Nights Like These: Photos from Lucero at the Social

Opener Jonny Fritz is from Nashville, but this honky-tonker definitely recalls a country music era that’s much older – or perhaps younger and underground. He’s a bit of a character too, which nicely seasons his quirk-edged storytelling style. Formerly known as Jonny Corndawg, he thankfully traded in that unfortunate stage name recently for his real one and has since been garnering lots of positive press, buzz and serious road time with legit names like the Heartless Bastards, Alabama Shakes and, now, Lucero. Coincidence? Perhaps.

Live, he came acoustic and only accompanied by fiddler Josh Hedley, a technically skilled player who stroked the bow for Justin Townes Earle. The result was a little more bayou than his recordings set you up for. But the heart, melody and brass of his trad country translated, just peppered with some woozy Cajun vigor.