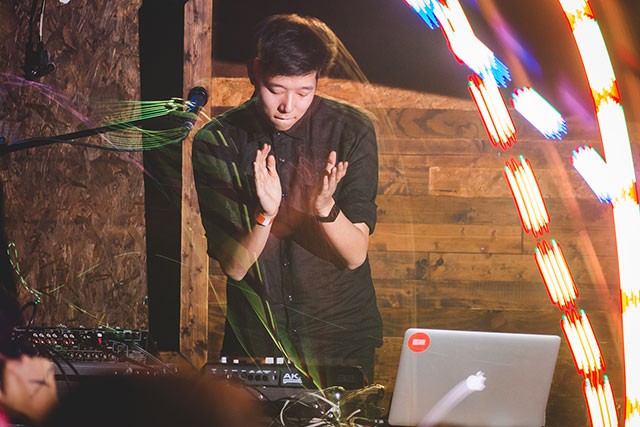 Figurative and literal folk hero Chuck Ragan returned, this time with his own full band – the Camaraderie – as the focus (April 29, the Social). Followers of the Florida-bred star and his Revival Tour (or Lucero, or Social Distortion for that matter) have seen the members of this talent-studded band play before, but this is their inaugural tour as an official unit. And they came revved, beginning with storming folk-rock and then turning toward the blazing rock & roll sunrise of Ragan’s latest opus, Till Midnight. More than just a big new sound, it’s an impressive stride forward in his already extraordinary feat of not just enduring but getting better with time. And those heart-bursting melodies are the sound of Ragan’s signature getting larger in the great American songbook.

Another notable debut was Jonny Two Bags (aka Jonny Wickersham), a Cali-punk legend whose credits include Cadillac Tramps, U.S. Bombs, Youth Brigade and being the man picked to handle guitar in Social Distortion after the death of founding member Dennis Dannell. Though heavily credentialed, the sideman’s best known for his ensemble contribution. But the full-band performance of his well-weathered punk- and country-informed rock & roll showcased respectable songwriting that should encourage him to step further into the spotlight.

Finally, I missed the opening set by local country-rasper Bartender Brian. But, apparently, part of this particular performance was his proposal to musician-girlfriend Alysa Oradat. So, congratulations!

It’s fitting – or within these city limits, almost obligatory – that any live voyage out into electronic music’s more abstract reaches includes Relief in Abstract. Sharing the bill with the touring likes of San Francisco’s Giraffage and New York’s Branchez were two RIA acts: Tampa’s Spies on Bikes and Orlando’s Marble (April 28, Backbooth). Of the two, Spies on Bikes really bumped the pulse. His range is laudably varied with pop intelligence and even a nice live vocal aspect. What makes it all go, though, is his sense of beat. Even when on the chill, his rhythm architecture is forward and assertive. Amen for that. Even though the politics of early had the crowd hugging the wall like they were at a third-grade dance at that point, SOB had them not just applauding but straight-up whooping. And good on RIA superstar Marcel Everett (XXYYXX) – who was just vibing out, not performing – for breaking down the wallflower inertia by stepping up to the front of the stage.

Marble’s more impressionistic soundscaping is an excellent place to underscore how much of a boon visuals are for shows like this (read: knob-twiddling and button-mashing, not a lot of physicality). The importance of that component ranges from welcome complement to saves-the-day bailout. I’ve seen some experimental electronic shows that would’ve made me flatline were it not for the visual rescue of Broken Machine Films. For his effective live video mixing during Marble’s set, Guillermo Casanova (RIA’s go-to visual guy) deserves due credit.

But one producer-type who can fly without that help is Giraffage, whose active, fleet-fingered live work was impressive. And musically, the guy kicks it pretty hard. Tastefully repurposing some near-classic mainstream songs with big energy and major low-end sickness, his jams are fresh R&B pump-ups for the underground beat scene.

Through the touring, heavyweight event-makers they bring here, local avant-minded music presenting group the Civic Minded 5 was ultimately my gateway to the amazing Timucua White House venue (timucua.com). But I’ve long wanted to get a taste of the more typical shows that happen practically every Sunday at this community treasure and haven of art, so I went in uninitiated to see a couple of Spanish-language singer-songwriters (April 27). Headliner Leo Aether, perhaps known best from Urbe Prima, showed a youthful folk heart that’s fueled by passion, hot blood and somewhat overcooked pop and rock tendencies.

But local billmate Kattya Graham was a nice discovery. Her lovely performance was the star of the night. Though her launch point is the Mexican folk tradition, she’s not necessarily a strict revivalist. Her songs are just simple grace and sweet soul-mining – the very essence of folk music.