Even though he's from Rhode Island, what makes it like a homecoming each time alt-rap icon Sage Francis comes to town is the big, deep footprint he has here as one of the most significant modern benefactors of the city's music culture. By introducing Solillaquists of Sound to the world in 2005, he did a real solid for our music cred and planted a pretty huge signpost on Orlando. Not saying that they wouldn't have broken out on their own – they are, after all, a triple threat of talent, fire and concept – but Francis ensured it. And the man deserves maximum local credit for that.

By reuniting these two historically joined forces, this latest show (April 23, the Social) was an illustrious vista of Orlando's connection to the broader music picture via hip-hop. Fittingly, the vibe was familial. Of course, that's just how the Solillaquists roll anyway, but tonight was more. Between the telling of Francis-related stories, expressions of gratitude toward him and the crowd-soaring announcement that group members and real-life couple DiVinci and Tonya Combs are expecting a child (congratulations, guys), a huge heart oxygenated the Solillaquists' set. That's real hometown fam shit there. So when Alexandra signed off with, "We're Solillaquists of Sound and we're from Orlando," all I could think was, yeah, I like the ring of that. I bet I wasn't the only one. 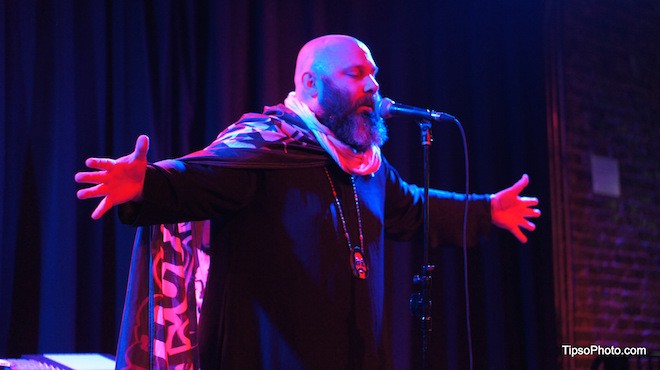 As the man whose bass lines essentially defined the sound of the post-punk generation, Peter Hook is as big an indie legend as they come. For the past five years, he and his current band, the Light, have primarily functioned as a Joy Division and New Order cover band, and their current tour brings the watershed releases of the Joy Division oeuvre, Unknown Pleasures and Closer, to the U.S. South for the first time.

The legitimate living conduits of this legendary work constitute a very small and exclusive club, and Hook's a card-carrying member. But the notion of touching such sacred, canonical work without the original cast is a prospect that can only betoken hubris, folly or just huge brass balls. The instrumental aspect isn't the issue because Hook is arguably more licensed than anyone to handle that. But someone else – not just Hook but anyone – stepping into singer Ian Curtis' shoes is an idea that seems insane, impossible. So did I mention I walked in skeptical?

At the well-attended Orlando stop (April 19, the Plaza Live), the Light opened for themselves with a nice 45-minute set of New Order material, which, judging from Hook's side projects, seems more suited to his sensibilities. Particularly juicy was the fact that they played some deeper choice cuts (like "This Time of Night") and not just the obvious, played-out transatlantic hits. (I can't be the only one who wouldn't mind retiring "Blue Monday.")

After an intermission, they re-emerged and delved into the featured Joy Division material. And with each successive song, my deep well of fan reservation abated. Although a little fleshier at times than the stark original recordings, the music was impressively faithful. Regarding the most obvious and perilous voice matter, Hook's register and stiff singing actually fared significantly better in approximating Ian Curtis' death croon than Bernard Sumner's lither, airier emoting. To his further credit, Hook didn't douche up the stage presentation with unnecessary modern glitz, opting instead for a muted, shadowy lighting strategy in tune with the band's original spirit. So I'm sorry for doubting you, Hooky.

For many reasons, not least of which is the irrevocable absence of the defining and deceased frontman, the singular miracle of Joy Division is just one of those things that can never fully be revived live. But somewhere along the way, through some sort of sorcery, Peter Hook managed to reconstitute Joy Division's doomed splendor to remarkable degree.

As a kid, I got to see New Order in their prime. So, as a fan who was never even close to seeing Joy Division in person, this was pretty special. Clocking in at almost three hours total, the show was a facsimile of an impossible fantasy that was as generous as it was respectable.