Photo by Ashley Belanger The In Between Series: 21 photos from Jim Ivy’s Tangled Bell Ensemble

The local rule is that if Jim Ivy is involved, it's gonna be weird or smart, often both.

For the consistently intriguing music monthly the In-Between Series, he rolled out a rather grand conceptual experiment with the debut of his Tangled Bell Ensemble (May 18, Gallery at Avalon Island). Using the early 20th-century poetry of Japanese author Akiko Yosano as impetus, the idea of the performance – titled "Midaregami (Tangled Hair)" – was to explore orchestrating heterogeneity into concert. To do that, he assembled a cast of 11 members – the biggest to perform the series yet – from an intentionally wide spectrum of musical backgrounds. Many of them looked and sounded like more classical players, but musicians I recognized from my usual beat included members of weirdo acts like Moon Jelly and Happy Valley. The resulting body was a small orchestra expanded with guitar, piano, accordion, voice and modern drum kit. At its head was Ivy pulling double duty as conductor and player on his trademark sax.

Sonically, the four-act journey was a tapestry of music and word (English and Japanese) that slithered from mystery to beauty to excitingly unchained bedlam at the end of the second act. Though structure and arc formed the program's narrative, the individual pieces were composed loosely to allow some placed pockets of improvisation, moments that seemed to make Ivy beam with the most joy and that at some points engaged each and every player. Further testament to the performance's extemporaneous spirit was the fact that the first time the entire group was in the same room together was about 40 minutes before the show. Though the end was an interesting, fully in-the-moment display, this was a demonstration of the art of process and spontaneity. As such, the result was adventure, not recital, and it was an experience of unfolding, evolving tension.

I've already said the In-Between Series is the most purely artistic music series in Orlando right now, but it may also be one of the most fertile. Intentionally or not, it's become the testing ground for the city's experimental musicians to spread some new orchestral wings. Only exciting and forward things can come of that.

Can you believe Built to Spill (May 15, the Social) has been on a major label for 18 years? How a band making thoughtful indie rock has survived in that arena in this day is one for the Sphinx. A group that's made a major career of sustained quality with basic fundamentals and no flash, well, that's one in the cosmic plus column there.

But the most electrifying act of the night was Portland's Wooden Indian Burial Ground. A noisy, swirling fever of garage, psych and surf, they have all the psychosis and density to validate their stripes. Keeping them from drowning in their own murk is a charged sense of punctuation. Furthermore, they're not a straight throwback act. Making them interesting is that they mingle early rock & roll's raw, nervy action with modern underground rock tendencies like sweet, blistering dissonance and discordant guitar angles. It may swing like classic garage rock, but it's just as likely to stab and scorch in one of its unpredictable fits.

I had zero prior knowledge of Idaho opener Clarke and the Himselfs, but I looked up the solo act and caught a description on his Bandcamp page saying he was a combination of My Bloody Valentine and Hasil Adkins. Never before have I heard of that intersection, not even in my wildest fanboy imagination. This I gotta see.

Turns out, the Hasil Adkins part was a bit of a descriptive overreach. But a one-man texture-rock operation is still something of a marvel. Clarke Howell's not simply working a stripped aesthetic, he's a single player going for a full sound. Between working a practically full drum kit, the kind of gorgeously groaning guitar effects that Pink Mountaintops used to specialize in and a weird trilling vocal effect, you've got an impressively lush solo act. Moreover, the actual quality of his songs proves he's no mere novelty act. 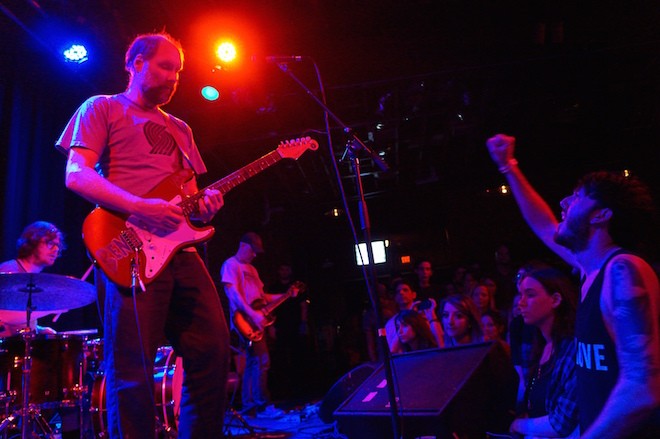