This Little Underground: The mighty return of Floor 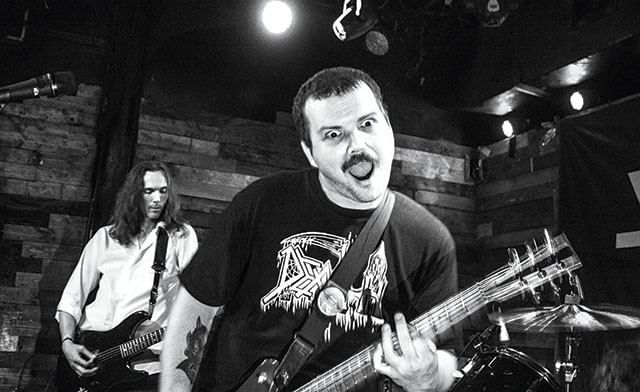 If you experienced their incendiary 2012 reunion show at Will’s Pub, then you have an idea of how reconstituted underground metal legends Floor lit it up again (June 2, Backbooth). As both their head-shaving live show and bomb-ass new album Oblation attest, few bands are as dialed in to their sweet spot as these Miami titans. The high-flying, melody-minded template for their quicksilver doom is a model of simplicity and power. With no trifling doodles or heroics, their musical architecture exists for a single-minded goal: to command the gaping electricity of their guitar tone, a thing of rare sonic perfection. There are few more exhilarating sounds in rock today. And the result is maximum effect with minimum arrangement.

For heavy music in general and Florida music in particular, Floor is a great comeback story. If there’s any band that deserves their victory lap and a chance at major-league bat, it’s these guys. The seeds of their groundbreaking work are only now being fully recognized as formative in blazing the big, bright frontier of modern heavy metal.

If there are any stubborn traces of cynicism out there, Floor’s new album should effectively snuff them. As the excellent new work proves, this is not some past-prime band on a cheap cash-grab, contrary even to everything frontman Steve Brooks told OW contributor Jason Ferguson in his feature story on their “temporary” 2010 reunion (see “Personal influence,” March 31, 2010). No, this is a vital, wildly prescient band that’s not only worthy of overdue credit but clearly has some serious untapped reserves in the tank. While Torche embellished this signature sound to game-changing results, the Floor blueprint is such an astonishingly distilled and focused ideal that it deserves its own sovereign glory. So I say, bring it on.

After many years of giving a Saharan amount of attention to our city, it is truly a great thing that alternative Southern rock kings the Drive-By Truckers are making Orlando a regular destination. For a while there, I was convinced that their much-too-brief set at Orlando Calling (remember that thing?) was going to be the first and last time I would see them here. But just like that overblown half-step of a music festival, the thought proved to be a mirage.

Let there be rock: Photos of Drive-By Truckers at the Beacham

At this point in their proven career, it would be bigger news if they delivered a bad performance rather than their characteristically good ones. And, unsurprisingly, this latest show (June 5, the Beacham) was one of the good ones. But their new material – of which Mike Cooley finally stands alongside Patterson Hood as a near-equal author – was great to hear live. Hopefully, after two well-attended shows in a row at a prime venue, the Truckers realize that they’re pretty welcome here.

But, as their stops here are starting to prove, seeing which opener the Truckers have in tow is becoming a special part of their shows. Last time, it was peerless underground heroes Centro-matic. This time, it was Mississippi up-and-comers Water Liars, whose new self-titled album on notable Mississippi indie label Big Legal Mess Records is a large, lovely thing. Standing in the deepening field between Two Gallants and Band of Horses, they make songs of heft, heart and beauty. They’re a bright young star in the galaxy of new Southern indie rock that’s definitely worth watching.

It seems Indiana’s Stagnant Pools – an otherwise very promising band – has lost its way a bit, and it showed in their subpar set opening for Clap Your Hands Say Yeah (June 6, the Social). But besides an inferior performance, the more worrying part is that the limitations of their design are showing. For a shoegaze-inspired duo that’s gone all-in on guitar sonics, everything lives and dies by tone and song. When even one falters, it all falls down. On stage, the problem was the often thin, tinny guitar tone. In their new album, Geist, it’s the sense of song, which is anemic compared to their excellent 2012 debut LP, Temporary Room. Any band with a narrow effective range – and Stagnant Pools is one of them – requires focus. Sadly, they’ve lost a little bit of theirs.