Photo by James Dechert Caught up: Photos from Jessica Hernandez & the Deltas at the Social

Losing a front figure is a perilous thing for a band. And when you're talking about one as incandescent and defining as the Sh-Booms' original singer Emily Patterson, it's something from which most acts never recover.

I first saw the freshly reloaded version of the local retro-soul syndicate a couple months ago, but that was amid the dizzying blur of the Will's Pub 20th anniversary blowout. Their opening set for Detroit upcomer Jessica Hernandez & the Deltas (Nov. 5, the Social) was a chance for a good, focused look at the band with new singer Mizz Bren (née Brenda Radney), whose studio credits include contributing backing vocals to Justin Timberlake (The 20/20 Experience) and, even more interestingly, ... And You Will Know Us By the Trail of Dead (The Century of Self).

The good news is that the big Sh-Booms locomotive hasn't ceded any horsepower – Bren's voice is a brick house. The better news is that they've taken a more modern and mature turn. Both singers are power plants of voice and presence. But while Patterson radiated more of an old-fashioned sweetheart halo, Mizz Bren throws off some tough grown-ass woman heat. And the band's sound shows sign of growing up alongside her, with less swing and more rock and soul grit. All of a sudden, the Sh-Booms' future now looks much longer and deeper.

No one besides my editor has seen it, but I wrote a blurb about the previous album by Public Image Ltd. (This Is PiL) in my year-end list for 2012. The original assignment was to write up not only my top picks of the year's releases like usual, but also the single biggest disappointment. Though it didn't make the cut, that PiL record was the butthole of that list. According to the raw copy, I called it a "stinker" and went on to say: "Without any of their prime-era nerve or conviction, the grooves and utterances here putter into the kind of inanity that all the underground cred in the world could barely pardon." Oof.

Their first studio LP in 20 years, This Is PiL was supposed to be the big comeback for the laureate John Lydon vehicle. But it would be safe to say from that little bit that I thought it might be best to honor the legacy of this heritage act by leaving the body buried. Still, they were one of those legends I never got to see live, so the announcement of their Orlando show (Nov. 7, Plaza Live) perked me a little. But after that inauspicious album, the curiosity was more morbid than anything.

And then their 2015 follow-up (What the World Needs Now ...) hit my inbox. Unlike that flaccid original return, this LP was sharp, cutting and alive – all the core qualities of PiL at their best. So, with new hope, I went.

The show turnout was testament of the band's place in the history books. The old alternative guard came out in a way that I thought they would for Gang of Four recently (Oct. 27, the Social), but strangely didn't. I wasn't on the spot five minutes before I overheard the word "Visage" dropped, and it would be repeated all around me throughout the night.

PiL's new album proved to be an accurate omen of the state of the band. They may not be young, but they sure aren't ready yet to roll over and become a golden-oldie act. The new material was featured heavily on the set list and the players sounded in fighting form. Being one of rock & roll's most iconic voices, little of that would matter without Lydon's presence, whose crazed warble is still impressive in its scowl and howl.

For all his famous astringency, though, Lydon didn't so much as play a single note before thanking the fans for the privilege of being able to do his one-of-a-kind thing for 40 years. And then, of course, he goes on to pillory the sound guy about his monitor throughout the first two songs. 'Atta boy, Johnny. Stay rotten. 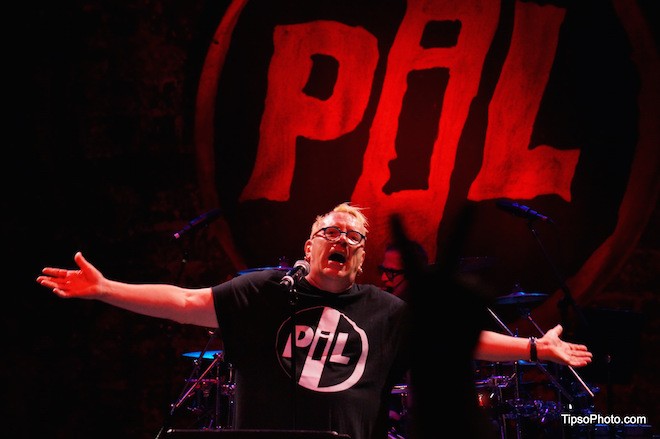