This Little Underground: The Space Station, Orlando's next DIY mission

Christopher Garcia You yes you: Photos from Tune-Yards and Son Lux at the Beacham

As ganglia for some entire underground scenes, DIY venues are a vital incubating component to any broader scene worth its salt. Now imagine if they were sustainable. The Space Station (lowerearthorbit.com), recently covered in Orlando Music News ("DIY venue and art studio the Space Station welcomes outsiders to catch live music and collaborate," March 25), is a newcomer that might just be.

At the terminus of a street in the western industrial fringe of College Park (2539 Coolidge Ave.), the Space Station is a warehouse-cum-underground clubhouse that's a genuine DIY zone without any of the shithole connotations that implies. Although there's a lounge space with a turntable and vinyl library, there's enough artwork and equipment around (screen printing, woodworking, brewing, rehearsal, etc.) to certify it as a place of creative industry and not just some basic scene hang. The recent F.N. Hostile event (April 2) had a communal vibe, with people breaking literal bread together before the show – like a chill little house party, only with face-blasting live music. The performance space is a concrete show box with a corner riser and even some lights and a disco ball, presumably for nights other than this heavy-metal congress.

All events are BYOB and free, but donations are accepted for performing artists and venue operation. Shows are early and end by 10 p.m. because of the noise ordinance, which was pretty well observed the night I was there. But even for a heavy show like this, the sound was pretty contained from the outside.

Of the local openers, Mom and Dan shot the straightest with simple, dirty and effective punk metal. Stocked with members of Primary Colors, Orlando's Powerful Black Power packed a lot of Primary Colors' daring and humor, but with even more hues. Like some sort of metal jazz, their blackened, experimental sound was a kaleidoscopic and constantly moving target, in turns technical, towering, explosive and swarming.

Georgia headliner Dead Hand, however, was a finished and widescreen experience. With the panorama of post-metal, they're like a truly doomed Red Sparowes whose bleak beauty unfurls like a slow-mo sweep over the ruins of fallen kingdoms. And even in a small, windowless room, their deliberate, slow-burning music was oceanic.

As a DIY venue, the Space Station might actually work because it seems to have a chassis that's not wholly built on the erratic lifeline of alms from sub-cultural youth with big ideals but often little means. I wish money didn't necessarily have to be a factor, either, but as much as purists try to force it there, art and culture don't exist in a vacuum. That's just life, kids. Because of its somewhat established bedrock and model, however, the Space Station may just have a better chance of survival than past failed missions. And having its shit together alone makes it especially worth supporting. 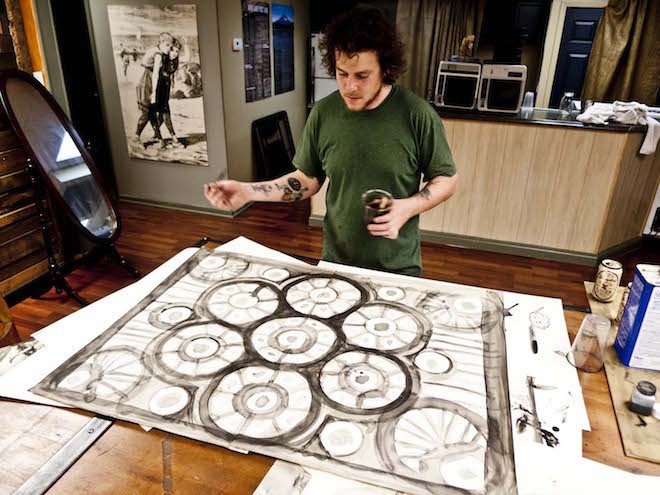 I wasn't always on the tUnE-yArDs train. The polarization surrounding them shows I'm not alone. From head to toe, this is a pretty labored act, sometimes to the point of high contrivance. Just look at their excruciatingly stylized name – I'm pretty sure my copy editor is straight-up seizing right now. But step by step, Tune-Yards' vision has developed cogency beyond weird-pop circles, best crystallized in their exceptional latest album, Nikki Nack.

Following through with this bright evolution, the full-band performance (April 3, the Beacham) on their first Florida tour ever was a big splash of color, show and nerve. The charged, polyrhythmic intelligence of their forward tribalism was delivered with the thrust of two percussionists and the fiery humanity of their melodies amplified with two backup singers. The total effect was rhythmically dazzling, constantly surprising pop music delivered with manifest core and force.

Also impressive was opener Son Lux, whose rhythmic invention and art-pop sense made them a natural pairing with Tune-Yards. Now clearly beyond the left-field hip-hop accents of the early Anticon days, Son Lux's music speaks a fully modern, integrated sonic language where rock and electronics don't feel like fusion. The result is a rich, unusual sound with a true eye on the future of pop.