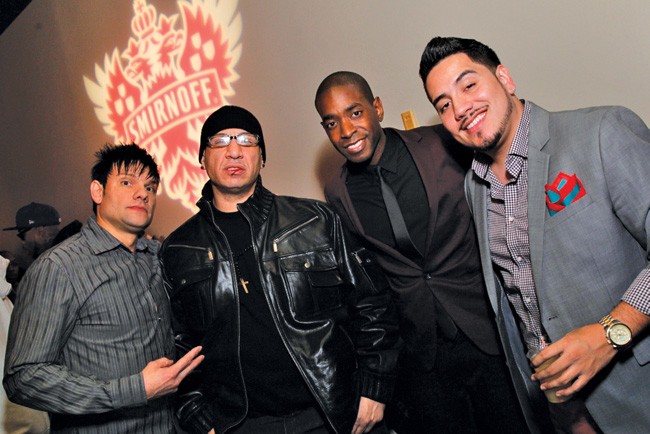 Holy mama, not only is Orange You Glad Music Festival (March 8-11, orangeyougladfest.com) back at last, it’s returning bigger and bolder. Founder-organizer Tierney Tough has given the indie-centric fest a major power pill by teaming up this time with Parafora Presents’ Chris Anderson. Although the emphasis is still rightfully on area talent, this edition is beefed up with some really bright national names, bands you’ve seen reviewed here as fresh standouts like Cults, Tennis, Grimes, Mr. Gnome – alongside new up-and-comers like Spectrals and Zambri. Get pumped.

Master of the Mix

There were some things that seriously undermined the legitimacy of season two of Master of the Mix , the DJ competition series on Centric/BET – specifically, eliminating dynamo turntablist Mell Starr way too prematurely, advancing weak-sauce competitor K-Sly way too far, admitting total fucking poseurs like Jamieson Hill and Nicole Leone into the race at all and allowing vacuous, woefully unqualified model/socialite Amber Rose to judge. That notwithstanding, Orlando DJ Michael (M-Squared) McPherson made it to the finals alongside worthy jocks DJ P and DJ Yonny. And although he didn’t ultimately prevail, he repped himself and his city with skill and style. What can I say? The kid is fresh. Well done, son. Now how about a hometown face-off between McPherson and the ever-dope DJ SPS?

At the music showcase by new art collective Parallelogram (Jan. 29, Peacock Room), local duo Glen Runciter delivered perhaps their most legible musical performance yet. Not to say that their frazzled, darkly whimsical art-pop was normal or anything. (These are not two normal dudes.) This set was just a more complete musical idea with melodies and rhythms working together, like, y’know, actual songs! That’s saying something for an act forever teetering between art, carnival and possible stunt.

Also playing was new band Sloppy Kisses. Upon hearing their first demos recently, I noted that the simple pop songs sounded like they were crafted either for children or for taking drugs, perhaps both. Live, they only deepened that impression with singer Anna Wallace’s full princess outfit and kid-trippy Fantasia projected behind them. Their songs are guilelessly cute and afloat in wonder – and perhaps this is the cynic in me showing, but the Kool-Aid’s so sweet that you can’t help but suspect it’s possibly laced. Maybe they’re just truly tapping into the strange world of kids or maybe it’s something subversive, I’m not sure. But I’m as intrigued as I am disturbed at the possibility of the new pop genre they might propagate: children’s psychedelia.

Speaking of which, local group the Nude Scene, the latest band fronted by Fred Mullins, is straight up revivalist psychedelia. Thing is, it’s a little too slavish. It’s properly mind-expanding and has potential, but they need to inject their sound with some freshness or suffer novelty status.

Just down the street (Will’s Pub) was Reptar,an Athens, Ga., band that’s been on the hustle hard and getting lots of national attention. Although they’re kind of overrated with a low common denominator take on indie pop, they are a real party band – nothing more, nothing less. And they’ve successfully created a sense of phenomenon about them with a lively, stirring show to match.

Despite the strangely longwinded screed by the owner on its website (the321local.com), I’ve been meaning to check out Cocoa venue the 321 Local for a while now. Now, when you walk up to a joint and see Joe Buck (Jan. 28) himself walking his awesome dog outside, you gotta figure this place is gonna be all right. And indeed, it’s a pretty correct rock bar with pool tables, a spacious and dark music room, big stage, good sound and just enough grime to feel comfy.

The punks and beachbillies turned out to see Tennessee headliner Joe Buck (of Hank III and Legendary Shack Shakers fame), whose punkabilly and blues-punk packed more gritty muscle this time. I’ve been underwhelmed by him before, but he sounded good in a real rock club. Also decent was Titusville band Horrible Hound Dogs, whose blend of rock & roll, rockabilly and punk come via nice, sonorous guitars flanked by upright bass and washboard.

As for the venue, the 321 Local is a solid place for a show and totally worth the short, easy-as-pie drive.