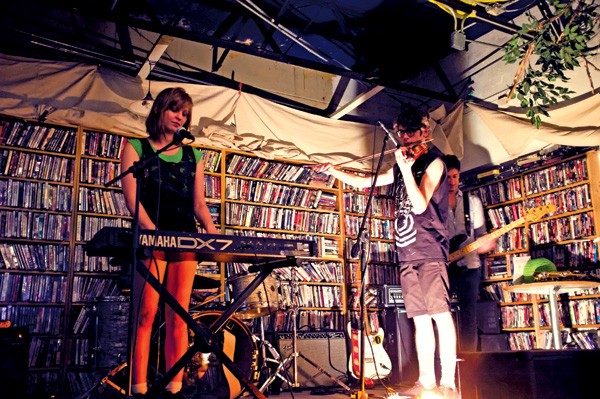 The big veil of Orlando Calling (Nov. 12-13, Citrus Bowl Park) was finally lifted last week. As with all huge events, the schizophrenic roster is hit-and-miss. But as much as some of us hoped for undiluted excellence, the reality is that events of massive scale necessarily cater to, duh, the masses. Big-dog U.K. organizer Festival Republic says it’s looking to capture the “American cultural experience” with this lineup, which, like well-meaning outsiders, they’ve done to degrees both adequate (Saturday’s lineup) and amusingly cartoonish (Kid Rock). And unfortunately, few of the truly good acts are particularly exotic for us Orlandoans.

But the real question is this: Now that Orlando Calling is calling, will we listen?Or will this turn into something like spring break or Bike Week– something we deal with for the cash influx but claim no kinship with? Dropping the too-cool-for-school posture we all love to strike, I’ll side with taking the exposure and business for our city. The lineup isn’t exactly an answered prayer for hard-boiled connoisseurs, but perhaps some slack is due for OC’s first toe-dip into our waters. Subsequent fests will prove the ultimate worth of Orlando Calling but, for now, let’s just see how the debut goes. What are your thoughts?

Titusville’s Flashlights will release their upcoming album, I’m Not Alone, in September on NK Tapes, Norse Korea’s new label. And it’s been rocking me proper. But after seeing them live (July 19, Uncle Lou’s), I think perhaps they should change their moniker to Flares, because the light they cast is one sky-blazing, party-starting, shit-losing starburst. Kicking like a more punk version of early Thermals, their rousing songs are dizzyingly tuneful and blaringly direct. If the right stars align for them, Flashlights could be a bona fide sensation. Stuff this correct only stays obscure for so long.

The jubilant lo-fi rock of local opener Slow Jamz is the exact opposite of what their name implies. Although they’re onto a good vibe, they were a clattery mess live; they sound like they’re still working things out. Lord, at least I hope so. I’d love to hear what these seeds of decent songs sound like once some nominal craft is applied to them.

New Austin, Texas, band Boyfrndz,however, was very well-put-together, with a decidedly math-rock bent. (You don’t pack a six-string bass for nothing, right?) But they’re much more than that. They merge kinetic, head-exploding release with an airy sense of song. This melodic heavenliness makes their technicality an invigorating punch and not a dragging anchor of overreaching display that kills the humanity in their music. It’s the kind of experimental rock with real beauty, the kind that doesn’t lose sight of the emotionality of music. They were the question mark from out of town, but ended up being a surprise find.

Orlando’s Permanent Nap was working in a brand-new member, and that could be why they sounded so transitional at their latest show (July 20, Stardust Video & Coffee). It’s definitely true that the ensemble needs more cohesion. But their tentativeness seemed more systemic than that. Although pleasant, their dreamy pop was cloudy and uncertain. Like Slow Jamz, it’s clear that something’s here; it just wasn’t all there yet.

Of the openers, Tampa’s No Milk was the best, bringing ’80s electronic futurism that was actually well-framed, vocally gutsy and packed with lovely intrigue. As a solo synth act, it was stark and not much to look at; one woman singing over mostly prerecorded tracks does not a riveting show make. But No Milk at least plays alluring music. When you consider all the crimes of art jivery committed in the one-man-band guise, she deserves all the more credit for her good songs.

Blending space, drone and noise in an amorphous way, fellow Tampa solo act S2Kwas a little less stimulating, musically, but homeboy sure knows how to seize the attention. He commenced his set by playing a basic cosmic track and launching into a rambling live monologue in the middle of the room that was essentially a synaptic storm in English. It was cuckoo, but it also illuminated his art, which is, by his admission, an entirely improvised affair. That’s one way to break a crowd out of its default stance – and that alone was commendable and worth seeing.