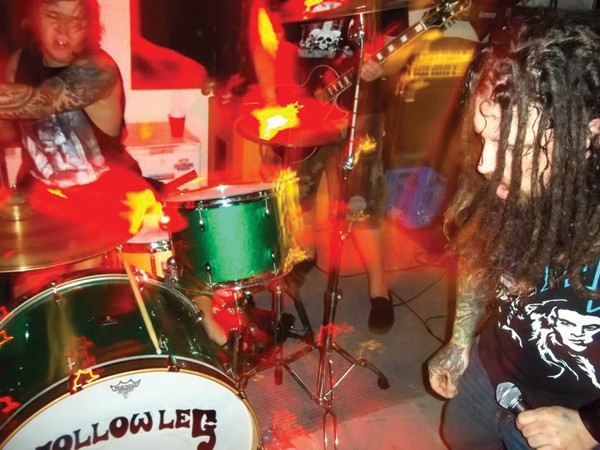 This week, there was just about as much fire on the stages as there was in the sky. So let’s get down.

Lovers of greasy, chunky rock & roll, meet your new fix: L.A.’s Hanni El Khatib (June 30, Hard Rock Live). Although heavily inspired by ’50s and ’60s pop culture, Khatib and his drummer were more reminiscent of an Elvis-bred White Stripes live. His debut album, Will the Guns Come Out, isn’t out until September, but lemme tell you, it’s solid. Apart from his charming doo-wop single “Dead Wrong,” he generally keeps his jams way in the red. An intriguing and hugely promising figure, this guy’s a real rocker worth keeping an eye on.

Headliner Florence & the Machine was pretty huge live. Florence Welch’s most effective – and admirable – trait is that, despite her vocal muscle, her voice still serves the song, and not the other, self-indulgent way around. Instead of wallowing in shit like scale-climbing and runaway vibrato, she focuses her power only where it truly counts, making her throttle punches that much more flooring. So suck it, Christina Aguilera.

Tampa’s Alien House opened a highly visual, mostly electronic showcase (June 29, Will’s Pub) with their deep, punctuated meditations. With liquid beats and mind-tingling guitars, their compelling grooves bend the peripheral vision, and spiral you not into sleep but rapt hypnosis.

Next was Orlando’s Southern Nights, who featured some energetic melodies and even party jams buried in thick, cerebral murk. If that high spirit were given more daylight to fly, who knows what level they’d tap next.

But then, this electronic sea parted, suddenly, like a Mack truck cutting a puddle. The driver? North Carolina’s Soft Opening, whose heavy, doomed psych rock contains absolutely nothing that could be considered soft. They started out like a truly stoned Black Angels, and then alternated between crushing chests in slo-mo and revving with cliff-diving thrills, handling both beautifully. They don’t paint themselves into the metal corner, and they certainly don’t fuck around with the flowery hippie elements of the psychedelic genre. OMFG, these guys are the real deal. They’re elephantine and thrilling – and there’s no greater balance to strike in hard rock than that. Why they’re not at the top of the psych-rock conversation is baffling.

As hefty as they were, however, the killer Orlandooom Productions showcase (June 27, Will’s Pub) may have one-upped ’em. Yes, NOLA’s Omean laid waste with viscous, doomed-to-hell grooves and vocals that caress like a pressure washer to the face.

But what I’m really talking about is the new lineup of Jacksonville’s Hollow Leg. It’s not as if the formerly two-man demolition crew needed to add any tonnage to their wrecking ball or anything. These guys were already murderers.

However, they’ve gone and doubled their army. But wait, the two new members are from, yes, Junior Bruce (bassist Tom Crowther and singer Scott Angelacos). You betcher ass this is big. This is Florida’s version of when Melvins brought aboard the boys from Big Business. I’m pretty possessive of my precious two-piece bands, but even I have to admit that this turbo expansion is massive. As impressively noxious as Hollow Leg’s sonic tar pit was as a duo, Crowther’s bass thickens and deepens that sludge exponentially, and the lightning bolt of Angelacos’ devil-roar ignites it into a raging inferno. With Angelacos’ voice and stage swagger in front, even Belle & Sebastian would slay. But with Hollow Leg? Good god, hold onto your skin. They lost none of their nastiness and only gained octane. I was certain Will’s Pub was going to be rubble by the time they were done. So polluted and glorious, theirs is now one of the dirtiest metal sounds around, somewhere between serial killer and Nagasaki. After them, everything is pussy.

If it weren’t for the fuzzies they give me, I’d feel sorry for the state’s other striving metal bands because this new roster is so unfairly stacked. This revamp should instantly make them the next big ticket in Florida metal. What a monster. This unholy lineup could become the Sunshine State’s next Godzilla. And while other regions, like the Pacific Northwest, can kick some big ass, THIS is how we do down here. And we will kill you.