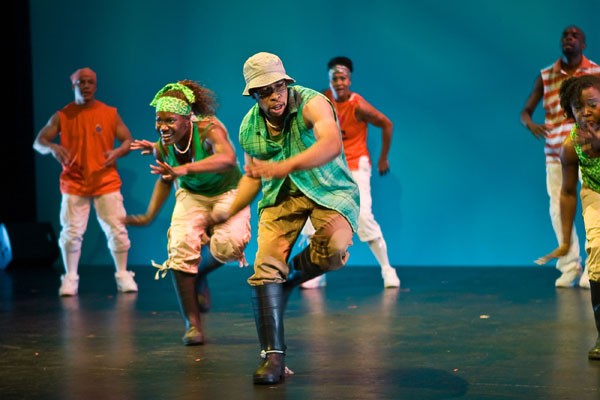 A good friend from a prestigious, historically black college once called me the blackest Asian he ever met. Maybe it was my politics. Maybe it was the music I was listening to. Or maybe it’s my enthusiasm for stepping, the dance tradition of African-American fraternities and sororities. The coordination, the cadence, the sheer physical force – it totally does it for me. Good god, I even watched Stomp the Yard all the way through (yikes).

So in my estimation, Rollins College had the right idea by kicking off their four-day Martin Luther King Jr. celebration with Step Afrika! (Jan. 13), a group calling itself the world’s first  professional dance company dedicated to stepping. With unity, grace and power, the coed squad electrified a gym full of spectators. Strip Stomp of its gimmicks and props and boil it down to its raw essence and you’ve got the percussive genius  of stepping.

Considering the occasion, it was nice to look around and realize that the audience itself, in all its color and diversity, is the personification of Dr. King’s dream. And though I can’t even begin to measure the miles we have left to go to properly achieve that ideal, there’s something to be said for the fact that it’s no longer an  exotic notion.

Weeks like these really remind you of what sort of solid talent can course through the  subterranean veins of our scene.

Shining bright was buzzing local band Teenage Softies (Jan. 14, Uncle Lou’s). I’ve seen them before elsewhere, but something about the lo-fi sonics of Uncle Lou’s really favors their sound. These kids actually do pop-punk right, a tall feat considering how negatively perceived that term has become. And they accomplish it by not bleaching the punk edge out of their fiber. Imagine that. For anyone tired of the square box that much of punk rock has become, particularly pop-punk, this will be a bracing slap in the mug. Fun, likeable and nicely frayed, they’re spirit in a bottle.

But a couple other bands really upped this bill’s rock & roll credentials to an astonishing degree for a little DIY dive. One was Brooklyn trio Big Eyes, who now stand alongside awesome bands like Screaming Females and Shellshag on boutique Jersey label Don Giovanni Records. Propelled by powerful drumming that seriously ups their caliber, their melodic garage style pumps with real rock balls. It’s elemental and cranked-up rock & roll. And sometimes that’s all you need.

The other star was Michigan’s Cheap Girls, who specialize in a smeared, jangle-heavy, life-affirming brand of American indie rock. Working the ’90s aesthetic of loud, high-octane rock with big heart and bigger melodies, they’re evocative of a time when bands from underdog cities rose to prominence. It’s a sound so beautiful yet so unattached to glamour that it could never come from a major-market city, which is something we of all people should be able to get behind. Besides, any band that makes people party like all the action in the entire world is happening in this one little room is all right by me, especially one that wins a crowd you wouldn’t think would be that into them.

Collectively, it was one of the most diverse, surprising and consistent shows I’ve ever seen at Uncle Lou’s.

Sparking up downtown was Rhode Island trio Cool World (Jan. 11, Bar-BQ-Bar). Like post-punk that’s been dredged in optimism and dropped in the fryer, their sound is a sky burst of lo-fi glory and chiming, airborne melodies. With a more revved-up version of the sunny, washed-out vibe that’s hotter than a supernova right now, these cats could and should be riding high on the current wave of “it” bands. Seeing a band of this worth in such an intimate, uncluttered and free setting was incredible. But, really, they deserve to return next time to much more fanfare.

Opening was local noise project Gem of Skin. On one of the bar tables with his back to the crowd, the one-man act manipulated effects to coax sounds that ranged from spacey ambling to thrilling spikes of noisy torque. Although it won’t recruit those not already hip to noise, Gem of Skin does have a picture of that nutty perma-drunk with the Friar Tuck hair who haunts Uncle Lou’s as its MySpace profile pic. Automatic win!