Bao Le-Huu takes on the Whigs, Ponderosa, Girl in a Coma, Shotgun Party and more 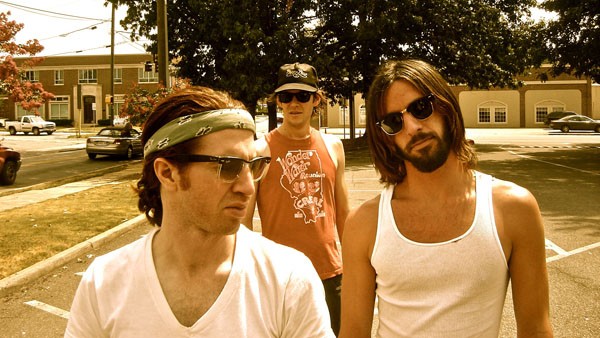 No, I don't care which Sandhaus brother stabbed and killed Lodge bouncer Milton Torres. I just want him made responsible to the maximum extent of the law. As for the less guilty brother, that guy's mug shot should be posted at every bar in the greater metro.

When Athens, Georgia's the Whigs (May 10, Back Booth) emerged in 2005 with their tuneful, economical and scruffy sound, I was totally on their bandwagon. In a 2006 interview, frontman Parker Gispert told me how they worked to avoid the overproduced sounds of today's records. But since then, slick arena aspirations have crept into their music. Besides it being an increasingly pointless endeavor, the bloat just hasn't served them well, bleaching out much of their once-considerable personality. Once upon a time, the term "alternative rock" actually had some meaning. Then it became empty and often pejorative, eventually becoming practically, tragically synonymous with "modern rock." That turning point is where the Whigs have both found and lost themselves.

They still put on a lively show, but it's sad to see a band like this waste their skill. When played side-by-side, their early material emanates with character and heart while their newer stuff is blanched by hollow girth. They could still have something left in 'em, but something has to change in order to access it. A good, hard look in the mirror would be a solid start.

Atlanta Southern rockers Ponderosa, however, haven't disappointed yet. Although already a powerhouse ensemble, one tweak they should consider is letting singer Kalen Nash stretch out and flex more. His voice has some mega potential to be a signature beacon for the band. But the unusual thing this time was the unexpected amplitude they showed with their dub reggae interlude and dreamy gaze-pop finale. If these were peeks at possible future avenues, these guys are way more than meets the eye and worth tracking even more. Then again, it ain't everyday that you see a good ol' boy sporting a Velvet Underground shirt like the bassist did, either. Being on this notable bill finally gave them the audience they deserve here. It's strange that Orlando's behind on this band given both our love of the twang and how hard they've been working this town. Regardless, get on 'em before they stop trying.

Rounding out the bill was DeLand's Andrew Shepard & the Roadkill Ghost Choir. I only caught a glimpse of them at the Lonesome City Travelers' CD release party, but it was pretty blinding. Now, after seeing a full set, I can fully affirm that they are the real Mac. Given a youthful and deluxe rendition with pedal steel, organ, banjo and mandolin on top of a full rock setup, this is folk and country music with span, range and gusto. As the band's evocative voice, Shepard is capable of both strength and vulnerability, showing occasional similarity to Two Gallants' Adam Haworth Stephens. They're impressively focused for a nascent group and the buzz behind them is warranted. These youngsters could teach a thing or three to the half-baked combos that some of the elders have been goofing around in recently. In the area's rising class of folk bands, the Roadkill Ghost Choir is quickly becoming the one to catch.

Kicking ass down the street was Texas' Girl in a Coma (the Social), comprised of three chicks who know how to rock. They're not good for girls - they're just plain good. With the immense presence of singer-guitarist Nina Diaz in the fore, they kick like Screaming Females with a streetwise alt grit and Chicano flavor that's every bit as good as it sounds on paper. Besides an athletic voice that can fly high like a songbird as well as bellow like a natural-born rocker, Diaz's impressive poise commands like Milka, only with more focus and underground influences.

It's great to see NYC's Two Man Gentle-men Band and Austin, Texas' Shotgun Party - two niche acts that have diligently worked Central Florida on a very grass-roots level - finally get on a big-boy stage (May 12, the Social). TMGB were ever the reliably riotous showmen. But the momentous, if lamentable, thing about Shotgun Party's performance is the fact that it's their farewell tour. And that sucks. But thanks for the great shows and good times, guys.