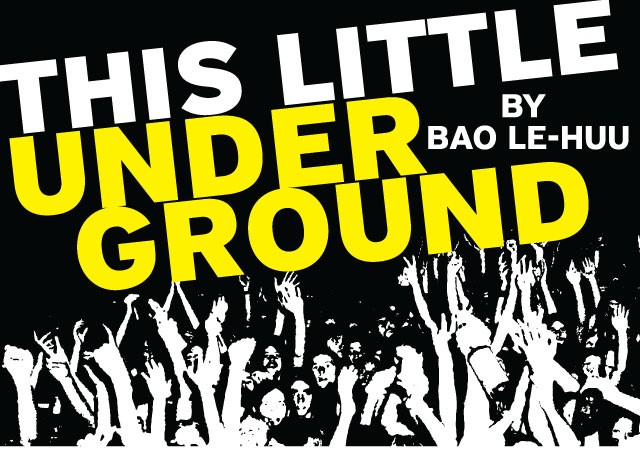 Experienced concertgoers know how critical the venue's sound engineer is to the show experience. Well, sound dude extraordinaire Wayne Shook has been running things right in this city for years at top clubs like the Social, the Beacham and Will's Pub. Despite a frightening ability to knock down the Jäger like nobody's business, he has long been one of the most professional and skilled guys around. Unfortunately, we're losing him to another city soon. So it's our turn to direct the applause at him by attending his farewell show (Oct. 10, Will's Pub) where the Legendary JC's and Paddington Ambush will rock for free.

The one-year anniversary party for the arty bunch over at culture blog Tiny Waves recently happened (Sept. 30, Peacock Room). In their year of existence, they've managed to kick up a little more than their name suggests in the scene, so happy birthday to them.

Among the most notable things there was a full-band performance by the usually solo Maximino, and it was interesting to see Gerald Perez's music presented in such a full and linear manner. Besides the welcome added dimension and wingspan, there were even moments of full-steam motion not heard in his ambient solo stuff. If this is what the next level might look like for Maximino, things could get interesting.

But let me stop right there and say this: A good, straightforward stage-and-audience concert is a solid thing. Once in a while, though, you're lucky enough to encounter a true event, something truly transporting. And one happened here.

Unquestionably, the night's most significant and arresting performance occurred outside the club and was the unnamed parking lot project by Tiny Waves music editor Steve Head and the aforementioned Perez. Kindred in spirit to the Flaming Lips' Zaireeka-era parking lot experiments, this event involved distributing CDs to about a dozen participating cars parked in a ring with doors and trunks open. A countdown sounded off, all the play buttons were pressed and a full-scale, open-air and exceptionally communal surround-sound experience instantaneously materialized. And it was absolute magic.

For one, it was a sight to see everyone gathered in the center, moving about to soak in the sounds in different combinations and angles. But it was quite another thing to actually experience it. This was something enveloping, dynamic and utterly alive. The sounds coalesced into a living, almost tactile thing that seemed to physically move around you.

The first, superior experiment was an impressively climactic electro-symphonic piece. As Head explains it, three different CDs were distributed among the cars. The same track was on all discs but in three different versions, each pitched and filtered to meld harmoniously. The second experiment involved all different tracks but the collective result was more droning.

Still, between the experiences both sonic and physical, this was a triumph of DIY concept and execution – probably the coolest local thing I've seen this year. In fact, if anyone has footage, please share. I'll keep track of this project for you, but Head tells me that another, more elaborate version is currently in development as part of the Accidental Music Festival (Nov. 9-11).

Riding the wind of a thoroughly great album (Seriousness), Minneapolis' the Blind Shake blew on down to Florida for the first time (Oct. 3, Will's Pub). With just drums and a dual-guitar attack, the trio does a blitzing take on garage-punk that's surf-splashed, noise-cranked and bottom-heavy (one of those guitars is a baritone and the drummer's an animal). It's a beautifully raw stomp delivered at fever pitch and done with style. Wild, wiry and harder-hitting than their garage peers, these guys rain down glorious, ass-shaking urgency in sound and body.

The Riverboat Gamblers won my heart at bigger venues by showing up the bands for which they opened. In an intimate room as headliner, though (Oct. 6, the Social), they absolutely lit up the room with their kinetic fire. They're a pitch-perfect mix of gutsy punk and party-starting rock & roll, and their songs rip like a hotrod burning out. The crowd may have been tame, but it was clear from the jump that singer Mike Wiebe was beyond restraint – leaping around onstage, then down on the floor, then on top of the bar and then out the front door. Kick ass, every damn time.