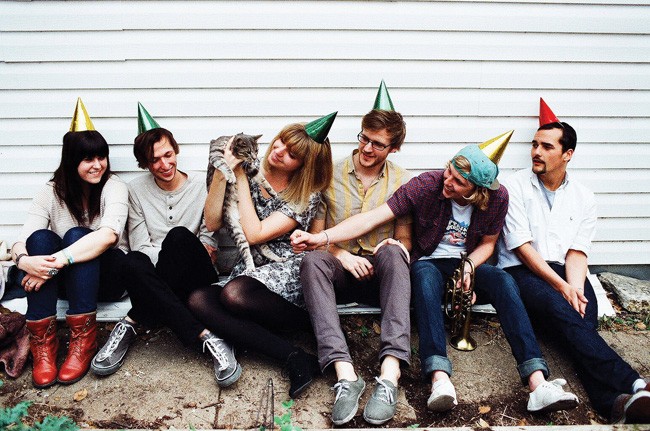 You’ve heard increasing mention of their events here this year, but it’s time to shed some proper light on the dark lords at Orlandooom Productions (orlandooom.com). When it comes to bringing the heavy to Orlando, they’re not only specialists, they’re the superlatives. Like practically all other genres, the island of good metal/heavy music is beset by a sea of clowns. That’s why discerning groups like Orlandooom are so valuable – they separate the wheat from the chaff. The hard/heavy spectrum is wide here, and it varies in quality, but Orlandooom is putting up the most legit lineups in the area, giving the city’s heavy music scene some real prestige. About time, too.

Their latest showcase (Aug. 19) reaffirmed why they’re a gift to Orlando’s savage underbelly. Local sludge slingers Demons truly lived up to their name with a diabolical sound that punishes through gut-shoveling grooves, fiery vocals and wild noise-rock, frontman-type physicality.

Dishing a more stoned brand of sludge in their debut show was Orlando’s Sluggard. Their riff-thick rock has a decent core but needs more beef on its bones. It could come from brawnier sonic treatment – and not necessarily a bassist. A premise this elemental needs more low-end wattage to make it really hammer.

Also on the bill was South Florida’s Hyimn. The writer in me believes something broke down in the spelling conception of their name because it turns out the correct pronunciation is “hi-men” and not like Blanche Devereaux cooing the word “hymn.” But whatever, because there’s nothing Golden Girls nor virginal about ’em. Their progressive sound is a little fancy and filigreed for my metal palate, but it throws flames nonetheless.

Too bad a recent bill (Aug. 16, Back Booth) was under-promoted because it turned out to be an outstanding showcase, particularly due to the surprising openers. Even though the much-buzzed Roadkill Ghost Choir headlined, attendance was unjustly thin. Let this be a lesson about lack of hustle.

On a (luckily good) tip, I arrived early to catch Houston-born Little Lo, a band that’s now relocated and making some new ripples in Austin, Texas, placing second in the Best New Band category of this year’s Austin Music Awards. Musically, they gleefully swirl indie rock, folk and chamber in a way that’s sophisticated and baroque yet beamingly fresh-faced. Emotionally, they play with hearts ablaze, and that makes all the difference in the world. In addition to typical rock instrumentation, their broad six-piece setup has the full wingspan of percussion, keys, violin, sax, bells and all. But unlike other bands this populated, everything serves a bigger, unified purpose. And their crisp writing and earnest outlook is what makes their songs rise into the sky and pop like fireworks. Their performance was so vivacious that they seemed to take the early crowd by surprise. At any rate, a sense of spirit and melody this big is impossible to go unnoticed for long.

Afterward was Last Good Tooth, a total surprise. Two minutes in, I was already asking myself where these guys came from and why I hadn’t heard of them. The only question I could answer was the former: They’re from Providence, R.I. But given how good they are, the latter still goes unanswered. But we know about ’em now.

With a traditional mountain pulse, they don’t go for the painfully obvious raved-up hillbilly hokum but rather tap in to a truer, more nuanced folk vein. And they do it very well. Being dialed in to the fuller emotional spectrum of folk music, they bypass the cheaper signposts that tourists latch on to so conveniently. The result is an earthy, nourishing and amplified mood.

Although not quite realized yet, the Naked Show (Aug. 18, Back Booth) is a worthy idea. Organized by local musician Erin Solari (the Still Voice), the concept is to show artists in an intimate, mingled way, where they occasionally join in and accompany each other’s sets. The debut featured known locals like Solari, Andy Matchett (the Minks), Thomas Wynn (the Believers), Travis Adams (Inkwell, My Hotel Year), Chris Rowland and Maria Capella. It yielded some moments of cross-collaboration but not as much as was promised and possible. Still, it’s a promising format that could be improved by having participants do shorter, multiple sets and more cooperative homework as a condition of participation. baolehuu@orlandoweekly.com