They say timing is everything, but don't tell Orlando's Indie Cinema Showcase.

In a year that has seen major fests scrapped and local events, such as this week's South Asian Film Festival, go virtual, ICS has bucked the trend by relaunching itself following a seven-year absence. The TV show is back, albeit in a tweaked format, doing what it did when it began in 2009: giving local, low-budget, independent filmmakers a broadcast voice.

Episodes air on Orange TV's entertainment channel, Vision TV (Spectrum channel 492 or Comcast channel 98), at 8 p.m. on Saturday and again at 6 p.m. on Sunday, in addition to YouTube, Vimeo, Roku and eventually Apple TV. Most episodes last 15-30 minutes and feature interviews, local movie news and films. Those films (or trailers) are all made by Floridians and usually run less than 10 minutes.

"I did a pilot episode [in 2009] to convince the program director [at Orange TV] that I could do a show on my own. Before that, I was just doing editing for them," Godbout says. "I went to my boss, Bill Suchy, and I said, 'You know, I would love to do a show about filmmakers.' And he said, 'I'll let you do a pilot ... and we'll go from there.'"

The pilot was a success, as was the entire first season, which was hosted by John Theisen (former FilmSlam producer) and Tim Anderson (now Enzian Theater's programming coordinator). But when Theisen and Anderson left to pursue other projects, Godbout rang the changes. 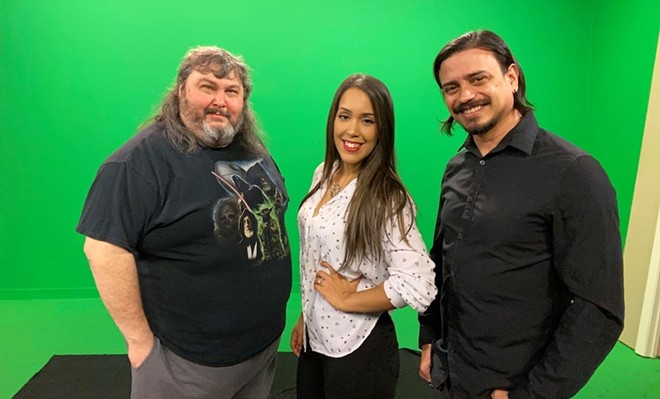 "I wanted to do something bigger," Godbout says. "It wasn't just talking heads. It had packages. I had a little bit more of a typical entertainment show."

That format continued until 2013, when Godbout ended the show to focus on his filmmaking and writing. But ICS wasn't forgotten, and, against the odds, Godbout rebooted it in January. But even when COVID-19 "slammed the brakes on the show," according to Godbout, he soldiered on with a format devoted exclusively to screening films.

ICS recently played local filmmaker Erin Laine's I Just Want You to Be Happy. Though the short film had already played traditional fests, Laine says she is happy to have her movie get a different type of exposure.

"Local access TV is pretty cool," she says. "The fact that you can tell your friends and family you'll be broadcast is pretty neat. The hosts seem genuinely interested in the genre since they are filmmakers themselves."

Those hosts are Nando Luis Roman and Christina Carmona, and their involvement dates back to the early days of ICS.

"I joined the show toward the end of the third season," says Roman. "At the time, their in-studio hosts had moved, and it left Christina to do the show as the sole host. So she approached Gerald and pitched the idea of bringing me on board as a guest host until they could find a replacement. He ended up liking the chemistry that we brought on screen [and] asked me to continue."

"When Gerry was approached by Mike Seif, who runs Orange TV, and asked if he'd be interested in bringing back ICS, Gerry said yes as long as he could bring his host back as well," Roman says. "So he reached out to us [and] asked us if we would be interested in once again taking up the mantle."

"It was a no-brainer for us to jump right back in because we loved working with Gerry and working with ICS," says Carmona. "This time it's very different, though, because Nando and myself aren't just hosts – we also co-produce and co-write episodes.

"I believe that one of the biggest things that sets ICS apart is that we are more than just a film showcase. ... We spotlight everything from makeup artists, prop and special effects, and even film schools. We try to provide different aspects of the filmmaking process because you never know who out there is wanting to get into the field as a voice-over actor, or a music composer or even a stunt/fight choreographer. ICS is a big supporter of the arts and in particular filmmaking, and our goal is to help the film community in Florida grow."