This primary season, vote for the person most likely to defeat Donald Trump

The week before a presidential primary election is usually when a publication makes its endorsements – statements of support for the candidates the editorial team thinks are best for the job. On the Democratic side, we're lucky this year – we have two solid candidates to pick from, both of whom represent (more or less) progressive values and socially forward-thinking policies.

On the Republican side, though, we have a problem. In addition to the usual suspects, we have one of the most horrifying examples of populism gone wrong.

We have Donald Trump.

Rather than issue an endorsement – or, as the Sun Sentinel did recently, rather than simply withhold an endorsement – we're going to openly reject one candidate, and we hope that you will do the same. We're urging you – seriously – not to vote for Donald Trump. Instead, we suggest that you vote for whomever you think stands the best chance of beating him – especially should the unthinkable happen and he actually wins the Republican nomination. Some of us think that candidate is Hillary Clinton; others believe it to be Bernie Sanders. As an editorial team we do not have consensus on that, but what we do share is the sentiment that Trump is more than just the short-fingered vulgarian that Spy magazine editors Graydon Carter (now editor of Vanity Fair) and Kurt Anderson (now host of radio show "Studio 360") famously dubbed him in 1988 – he's a menace to society.

This weekend, after Trump made his appearance at the University of Central Florida, where he asked a crowd of 10,000 to raise their right hands and pledge their allegiance to him, Nazi-style, we got a pro-Trump letter from a man named George Devine. It read:

"We the people are fed up with the lies and deceit of the greedy politicians who think more of themselves than the people they represent. They are a group of self-righteous individuals who capitalize on every opportunity to benefit themselves. Our voice is being heard loud and clear. Politicians, you will mistreat us no more. We will elect a person who is not a politician and cannot be bought. One who is on a mission to take this country back and restore the greatness that it once had. We will elect a one Donald J. Trump. And so it shall be."

There's a distressingly large number of people who, like Devine, believe that Trump hears their voices, when it's doubtful that he actually hears any voice other than his own. People are flocking to him in droves because they think that, because he's so rich, he'll somehow be immune to the influence of money in politics. They think that Trump is the uniter, not a divider. They think he's a man of the people.

We get it, Trump lovers – you're tired of a divided country, you're sick of politicians, you want somebody who allegedly "tells it like it is." Trump is not the solution, though his campaign is a symptom of the larger political illness that affects this country. If he were elected, the disease would spread. He would certainly create an even more divided country than we have now (the sturm und drang surrounding his campaign should be some indication of that), he'd be negotiating within the very same political system you currently despise, and we can guarantee you that a wealthy private businessman who's accustomed to doing all of his deals in secluded boardrooms away from the scrutiny of the public eye is not going to actually tell you how it is.

Trump is a private developer whose primary business is to build monuments to himself emblazoned with his name, and now he's trying to make another acquisition. He's trying to purchase the United States so he can redevelop it into another gaudy temple to the Trump legacy. And if you've been to any of those other temples – Trump Tower, Trump Plaza, Trump Palace, Trump World, Trump Place, the list goes on and on – you know that they weren't built for the average citizen. They are playgrounds for the rich. You'll be welcome to admire the lobby, but you won't be welcome to play there unless you complement the decor.

Take, for instance, Trump Tower. When Trump was striking a deal with the city of New York to build his signature erection, he agreed to make the atrium of the building what New York calls a "privately owned public space" – that is, a public amenity open for free to anyone who wants to use it – in exchange for a permit to add 20 additional floors to the structure. The deal, according to the city, specifically spelled out how many benches and amenities would be available to the public, but over the years Trump's organization has replaced some of the space and a public bench with shopping counters that sell Trump souvenirs – hats, ties, box sets of The Apprentice – much to the consternation of the city, which fined the Trump organization $4,000 for violating the original terms of the agreement and insisted that he remove the Trump Store from the public space. But what's $4,000 to Trump? He can afford to ignore the agreement and hawk his Trump goodies. "An altar to Donald Trump swallows up public space in Manhattan," the New York Times reported in July, noting that Trump was offended by the "horrors" the public bench attracted to the lobby (homeless people, for instance). Does that sound like the kind of guy who's in it for the people?

Look back to 1989 when five black teens were questioned in connection with the rape and beating of a woman jogging through Central Park. Trump took out full-page advertisements in several of New York City's major newspapers reading, "Bring back the death penalty. Bring back our police!" The ads denounced the crime, decried the "roving bands of wild criminals" that terrorized citizens, and announced that "civil liberties end when an attack on our safety begins."

The ad insinuated that the teens who allegedly perpetrated the crime should "be forced to suffer and, when they kill, they should be executed for their crimes." All five teens, who would later become known as the Central Park Five, were initially convicted but later exonerated of the crime when the actual attacker confessed. 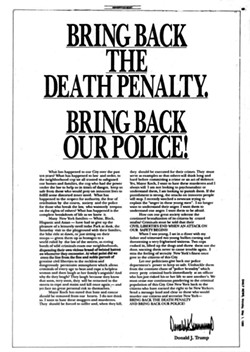 Is that the kind of justice this country should stand for?

Look back at Trump's binders full of women, and his comments about them over the years if you still aren't sure how women would fare under his leadership. If you were a listener of the "Howard Stern Show" in the late 1990s through the mid-2000s (and I was) you heard him on the air as a regular guest. And during each appearance, he routinely disrespected women – any women, all women, ones he'd slept with, ones he wanted to sleep with, ones he claimed he'd never sleep with – ranging from Kim Kardashian to Diana, Princess of Wales, to Angelina Jolie to the women participating in the Miss USA pageants that he purchased in 1997 (about them, he told the world, "If you're looking for a rocket scientist, don't tune in [to watch the pageant] tonight, but if you're looking for a really beautiful woman, you should watch").

Do you want your daughters and granddaughters to look up to a man like that as president? How about your sons?

Trump's candidacy has brought out some of the ugliest, meanest and most divisive rhetoric we've heard in politics yet. He's played upon supporters' emotions and fears and frustrations, using empty promises and hollow words to empower people to voice their racism, sexism, classism, hatred, xenophobia and cruelty ... and yet he claims he's the one who's going to bring us all together.

But how, with his alienating persona? How? – it's the same question that everybody's been asking all along whenever Trump says something so absurd, so highly unlikely. Each time he's asked how, whether it's in regard to how he's going to force Mexico to pay for a giant wall along the U.S. border or how he's going to force the U.S. military to violate international law, the response is strikingly similar:

"If I say 'do it,' they're going to do it," is the ominous answer he gave on Saturday at UCF. "That's what leadership is all about."

Leadership is about bullying and threatening people, then? Fear-mongering? Making unilateral decisions because you're the leader? That sounds downright unconstitutional to us.

"If we win Florida, believe me, it's all over," he told the cheering crowd on Saturday. And if he does win Florida, he may be right about that – so do the right thing, Florida.