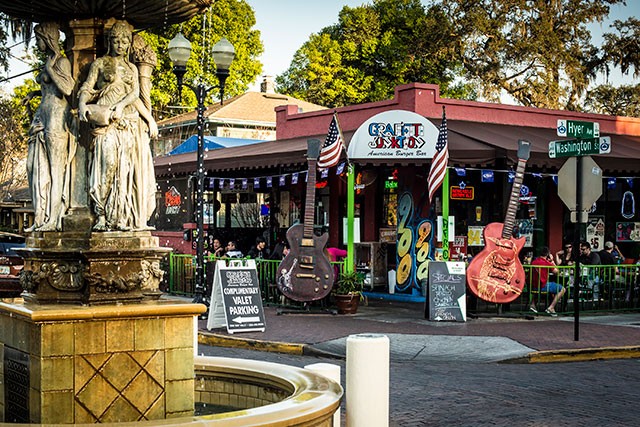 “Thornton Park is a mixture … old and new, gay and straight, accepting,” Melissa Schumann explains. Schumann, a resident of the Thornton Park neighborhood for the past eight years, is the president of Thornton Park District Main Street, and she and her husband own custom T-shirt store Mother Falcon (819 E. Washington St., 407-423-3060, motherfalconclothing.com) and the Falcon Bar & Gallery (819 E. Washington St., Suite 2, thefalconbar.com) next door, which hosts monthly art shows and wine walks.

In recent years, the couple played a part in bringing an influx of young, artistic residents to the area, and Thornton Park, located just a few shorts blocks away from the downtown district, offers something of a respite from the hustle-and-bustle of North Orange Avenue. It’s also home, says Schumann, to “a colorful commercial district with a European feel to the restaurants and boutiques.”

Take a stroll through this neighborhood (and it is, unlike a lot of Orlando ’hoods, very walkable) on any weekday and you’ll find the after-work set decked out in business suits grabbing a glassful at Eola Wine Company (430 E. Central Blvd., 407-481-9100, eolawinecompany.com), or sipping on craft suds around the corner on the street-side patio at Sonoma Draught House (100 S. Eola Drive, 407-730-3400, sonomadraughthouse.com). During the evening, that same professional pack (and other upscale trendsetters) roll into Shari Sushi Lounge (621 E. Central Blvd., 407-420-9420, sharisushilounge.com) for sophisticated dinner gatherings.

Acting as the creative hub of the Thornton Park area (and arguably, the rest of the city), is Urban ReThink (625 E. Central Blvd., 407-704-6895, urbanrethink.com). Dropping in on any given day might land you in the middle of a reading series, film screening or writing workshop. Grab a bite at the Spork Café (625 E. Central Blvd., 407-476-6250, thesporkcafe.com), located in the Urban ReThink space, which dishes out creative vegan and vegetarian fare.

If there’s one thing you can’t miss in Thornton Park (because it’s literally the largest landmark in the area), it’s Lake Eola Park and its Art Deco fountain, which has become a trademark for the City Beautiful. Not only does the park serve as a gathering place for walkers and runners, every Sunday a collection of local food producers, craft vendors and musicians gather for the Orlando Farmers Market (orlandofarmersmarket.com). The lake is also home to a surprisingly diverse assortment of wildlife – stroll around the path and you’re sure to encounter swans, herons, turtles, mallards, anhingas and egrets. It’s an oasis right in the heart of the city’s busiest region.