"Tiger" is a tale not worth chasing 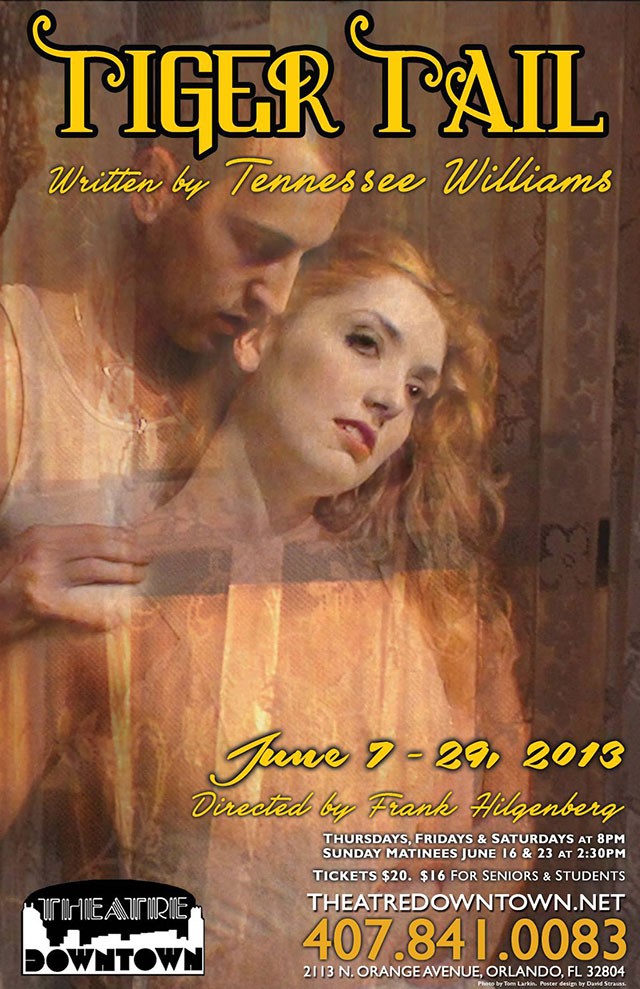 It’s always difficult to capture the magic of Tennessee Williams. Overplay his Southern Gothic romanticism and the characters are reduced to cartoonish stereotypes; underplay or rush it, and risk ruining the pitch-perfect prose dripping from each word. Regrettably, the new production of Williams’ Tiger Tail at Theatre Downtown does a bit of both, giving us only occasional glimpses at the play’s power.

Further hampering this production is the fact that the play itself is one of Williams’ weakest. Though he wrote it in the 1970s, it didn’t receive its New York premiere until 1999, 16 years after his death. It’s a reworking of his screenplay for the 1956 classic Baby Doll, directed and co-written by Elia Kazan, and will forever live in the shadow of that great and controversial film.

Archie Lee, played by Theatre Downtown veteran Tim Bass, is a cotton farmer whose business has been ruined by a company new to the Mississippi town of Tiger Tail. In an act of desperation, Archie gets his revenge by burning down their cotton gin. But the plan backfires when the company’s Sicilian boss, Silva Vacarro, suspects Archie and proceeds to sexually prey on his wife, 19-year-old temptress Baby Doll.

The success of the play – even more so than the film – depends on the performances of and sexual tension between Silva and Baby Doll, and Frank Casado and Brenna Warner aren’t up to the task. Warner certainly looks the part – and her brief nudity turns up the heat – but her Baby Doll seems raw and unrehearsed, while Casado plays Silva as an angry redneck without the necessary subtlety, humor and charm.

Bass brings boundless energy, literally throwing himself into the role with drunken abandon, but he can’t capture Archie’s emasculated sadness, and the character becomes simply a racist, violent alcoholic. Even the bits of background music seem misplaced and distracting. Only the moss-draped set by Mike McRee renders the appropriate atmosphere.

Director Frank Hilgenberg, founder and artistic director of Theatre Downtown, has done much finer work than this, and will again. Until that time comes, stay home and watch Baby Doll on Netflix.