Tim Keating takes the kitchen at Urbain 40, Taste of Haiti happens in early June, plus more in our weekly food news roundup

NEWS/EVENTS
Tim Keating, formerly of Disney's Flying Fish Cafe, is now executive chef of Urbain 40 in Dr. Phillips … The trio behind the soon-to-open Kadence in Audubon Park will take over La Pollita in Miami from May 26-28 … 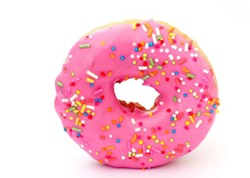 Celebrate National Donut Day at Orange County Library's Edgewater Branch Friday, June 2, at 2 p.m. Crafts, games and Krispy Kreme donuts will be provided … The Taste of Haiti takes place Saturday, June 3, at 2 p.m. at Gaston Edwards Park in Ivanhoe Village. A $10 donation is suggested, with all proceeds benefiting the Haitian Culinary Alliance's "Haiti Chefs for Education" program … Chefs Bruno Zacchini of Pizza Bruno and Nick Sierputowski of the Ravenous Pig join forces Sunday, June 11, at 6:30 p.m. for an Italian-themed collaboration dinner at the Ravenous Pig. Cost for the four-course dinner is $65 … Winter Park Seltzer Company will launch its line of organic fruit-infused seltzer next month with such flavors as grapefruit, lemon-lime-mint, strawberry-cucumber, blueberry-lemon, and a craft cola.

OPENINGS
Laurel Latin Cuisine, specializing in Venezuelan fare, has opened on Park Avenue … M Lounge, a rooftop bar in Ivanhoe Village, has opened … Soho Juice Co., offering acai bowls, smoothies and cold-pressed juices, will open in the old Subway space next to Popeye's on South Orlando Avenue … Orlando's third Shake Shack opens its doors at Florida Mall on Tuesday, May 30, at 11 a.m. … Pepe's Cantina will open its second location on Church Street this summer … Burgerim, a chain specializing in gourmet mini-patties, plans to open in Orlando at 6139 Westwood Blvd. in mid-August … Look for Wolf Branch Brewing to soft-open in downtown Eustis this August. The plan is to be fully operational by October.