‘Time as Landscape’ considers the meshes of cosmological, geological and human scales of time

Time as Landscape, currently on view at the Cornell Fine Arts Museum and the Alfond Inn in Winter Park, ruminates on the scale of life and human action in relation to time and geological change. Considering the incomprehensible coalescences of cosmological, geological and human scales of time, the exhibition, curated by Amy Galpin and Abigail Ross Goodman, features works by artists who share in their practice an awareness of, and keen interest in, the infinities existing in microcosm and macrocosm in our universe. The exhibition is punctuated with selections from the Smith Watchkey Collection, juxtaposing the extraordinary wonder of the observed world with the quotidian measure of time at a human scale. Considering parallels in fields of scientific and artistic observation, Time as Landscape offers time to critically reflect on the possibilities and limitations of our modes of understanding the intricacies of our world.

Florida Prize in Contemporary Art nominee, Rollins College professor and Orlando resident Dawn Roe's contribution to the show, a small cyanotype created during a recent residency in Portbou, Spain, titled Cloth Left 2 Days at Cemeterio de Portbou, acts as a record of time and physical contact between an experienced reality and its mediated representation. An alternative photographic process using photosensitive chemicals and exposure to light, the cyanotype process was first introduced by an astronomer in an attempt to reproduce his handwritten notes, and was used well into the 20th century as a low-cost method of graphic reproduction. In the case of Roe's experimentations with cyanotype, her focus is on recording perceived moments, rather than documenting or reproducing an image of a readily identifiable subject or signifier. In Roe's piece, the relationship between time and human perceptions of the landscape is elegantly visualized in shades of blue.

Rosa Barba's The Color Out of Space, a video with a sculptural installation component, similarly meditates on the material qualities of perception. A video comprised of images of space is projected through multiple panes of colored glass, interrupting the traditional viewing experience and facilitating a consideration of celestial bodies and our mediated perceptive experiences of such. With an artistic practice rooted in an interest in the physical properties of cinema, particularly celluloid film and the machinations of projection, the Berlin-based artist collaborated with scientists at the Hirsch Observatory at Rensselaer Polytechnic Institute to create the work.

Camille Henrot's Grosse Fatigue, another interdisciplinary, artistic and scientific collaboration, was created as a part of the Smithsonian Artist Research Fellowship program. The video is another reflection on the human endeavor to record and make meaning of our experience of the world. During her time at the Smithsonian, Henrot became overwhelmed by the vast amount of information held within the institution's archive, and its ambitious mission of "increasing knowledge." The artist processed this deluge of information by creating Grosse Fatigue. From the perspective of a frenetic screen capture of a computer desktop, the 13-minute video juxtaposes footage of the Smithsonian's collection with a voice-over narrating a constructed creation myth, culling elements from religious, historic and scientific understandings of human origins, making apparent tensions between humanity's observed knowledge of the world and our attempts to narrativize such.

Tomás Saraceno's Cloud Cities: Nebulous Thresholds, a site-specific sculpture commissioned as the newest addition to the Alfond Collection of Contemporary Art, represents a utopian narrativization of the future of human existence. The sculpture appears to float weightlessly from the glass, domed ceiling of the Alfond Inn, casting iridescent, cotton-candy-colored light in the space. Part of a larger body of work of sculptural manifestations of Saraceno's vision of modular, sustainable dwellings for a humanity of the future, Cloud Cities envisions a utopia built out of a greater awareness of the connectivity between humans and the environment. 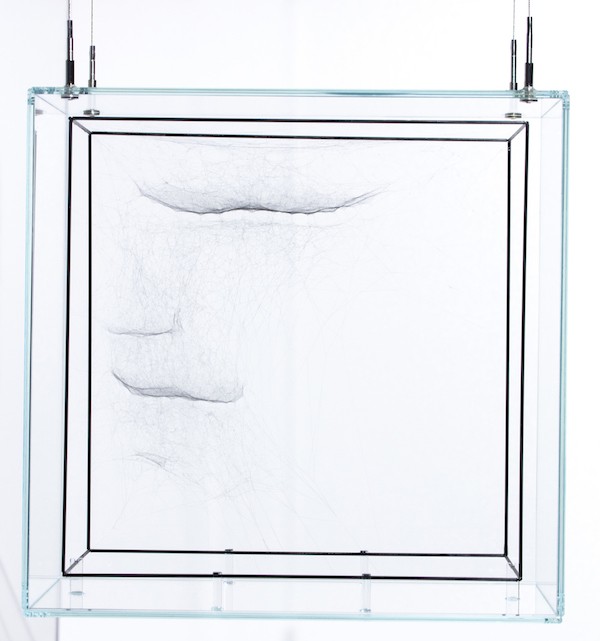 Artistic and scientific observation are both disciplines which seek a greater understanding of our place in the universe as humans. The artists represented in Time as Landscape are particularly attuned to the rigors of their specific processes, as well as the geological and temporal venues in which these processes exist; they record and organize the material presence of the natural world, they examine the effects of mediated experience, they expose the futility of organizing the infinite, and they imagine how utopia could be built.