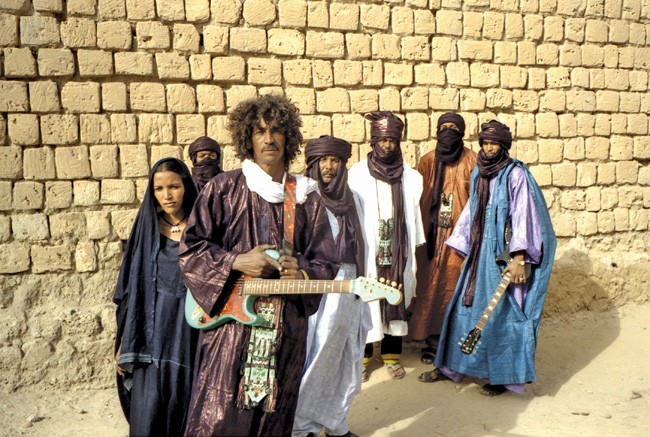 For a band of nomads – a literal band of nomads – to make a musical impact on Western ears is an unusual achievement. Maybe such a group constitutes a curious aside on your favorite world music show, or garner a tiny blog mention as the preferred obscure listening habit of your favorite indie musician, but to be signed to the same label as Tom Waits and Nick Cave? To embark on a tour that takes them to rock clubs across the U.S.? That’s not just unusual, that’s nearly unprecedented.

But that’s exactly what’s happened with Tinariwen, a group born in the sands of Northern Africa that has exploded beyond the typical constraints of world music festivals and into a legitimate underground rock & roll phenomenon. One could argue that this newfound attention is due to the fact that Tinariwen’s compelling back story – they’re a loose collective of Malian musicians who were forced into Libyan refugee camps while their country was at war in the late ’70s – has helped them garner this newfound attention, but a story only goes so far.

The group’s raw, blues-flecked and dirty guitar sounds instantly resonate with Western audiences raised on rock. The guitarists’ circular, trance-like melodies are as insistent as they are inviting, as foreign as they are familiar. When threaded through the Tuareg rhythms and vocals that define the music of these Saharan nomads, the combination is deeply affecting and resonant, and not a little bit punk rock. Unlike other world musicians who have evolved over time to accommodate the ears of those in Europe and America, Tinariwen has remained true to their original sound, if not their ad-hoc roots.

“We always do what we want. In the ’80s, we were not a professional band, we were a collective of musicians who used to perform together for some traditional events,” explains lead guitarist Ibrahim Ag Alhabib, who helped found the group while a refugee in Libya. “There was no planning, no touring. We were recording tapes in some radios and people shared our music with tapes. [But] from the beginning of 2000, we became more professional; we hired a manager, an agent and so on. The music didn’t really change, though. We just needed to adapt it for a record.”

That newfound professionalism yielded results quickly, and in 2001, Tinariwen headlined the Festival in the Desert in Mali, which began that year as a celebration of traditional Tuareg culture, but would quickly grow into a massive annual event thanks to their popularity. (The 2003 edition featured Robert Plant and was documented in the excellent Festival in the Desert film.) This popularity soon spread to European audiences and, over the years, the group has gone on to play festivals like Coachella, All Tomorrow’s Parties, Glastonbury and others. For a group playing semi-traditional music in a language that few Westerners speak, this is a major feat, but it’s also been frustrating for Alhabib and the rest of Tinariwen, since so much of their music is message-based, touching on both broad issues of freedom and more overtly political themes.

“We try to offer translation in the CD’s booklet [and on] our website for people interested,” Alhabib says. “But I think that first, this is our special camel groove and this trance feeling that people love; they can enter in the meanings later.”

Those meanings, though, are still deeply important to Tinariwen, especially in these days of the Arab Spring.

“We are really happy about what [has] happened in the Arabic countries these days,” Alhabib says. “Libya is a more complex situation as [deceased Libyan dictator Moammar] Gadhafi had some relationship with Eastern governments and West African politics. A lot of people died also, and a lot of our people needed to leave Libya and have no lands to leave.” But, he adds, “Freedom is always what we were looking for as nomadic people.”