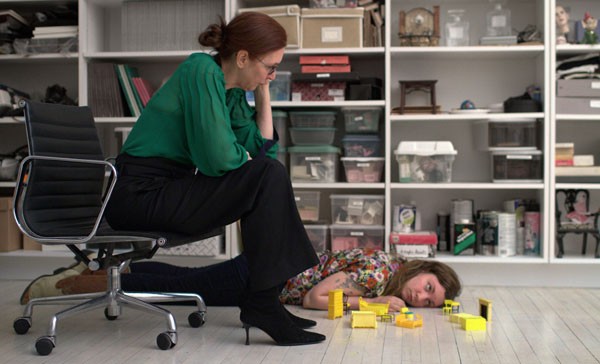 Aura is adrift. Recently graduated from college in Ohio, the film-studies major was immediately dumped by her boyfriend and forced to move back in with her control-freak artist mother in her Manhattan loft where she makes a good living taking photographs of small-scale furniture for some reason.

Aura's little sister is pretty and petulant, and they clash as sisters do, even though Aura wants to rise above that. Aura's friends, acquaintances and co-workers - she takes a hostess job that pays little enough that another worker admits she eventually stopped picking up the paychecks - are all unpleasant people in their own right, entitled and bored liberal-arts slackers, one of whom literally slaps Aura in the face for no reason. Another, a peddler of YouTube viral videos with titles like "Nietzschian Cowboy," crashes at Aura's mom's place, is convinced the mattress is "defective," shows not even a courteous sexual interest in Aura despite her body language that serves as a neon sign, and reads Woody Allen in bed, possibly looking for his next neurotic affectation. Aura floats through conversations and interactions, ducking from references to Rachel Maddow, American Psycho and Cormac McCarthy that are constantly thrown at her head like daggers of condescension. She is not one of these people. That's a good thing, but at this time in her life, she'd take awful over inconsequential.

Aura is played by Lena Dunham, who also wrote, directed and produced this debut feature in which she cast her real-life mother, her mother's loft and her sister in their same roles. Dunham shot the film with a Canon 7D, an over-the-counter SLR still camera that also shoots video - essentially YouTube quality, though she worked closely with Technicolor on color correction. In other words, it's a few steps removed from a home movie, which gives the film its sense of immediacy, though that's not to imply that it's an active movie in any way. Instead, Dunham's camera is patient and restrained which allows Dunham's character, Aura, to come to it with all her neediness, restlessness and exhibitionism.

That last part's a strange one: Aura's natural state in her mother's home is to go pantsless. And I'm not judging (though many around her do): It's a perfectly natural response to aimlessness. But in these, well, naked moments, Dunham the actress often repositions herself to the camera, breaking the fourth wall. It's curious and playful, but strangely immature, suggesting a brighter future in filmmaking  than acting.

There are other major flaws: The miniature-scale metaphor never sticks, nor does a weak framing device concerning her  passive-aggressive mother's newly discovered journals and Aura's rapt readings of them aloud. You want to scream at the screen: "Aura, your mother's not that deep or interesting, and she's kind of a bitch. Put the journals down and get your own place."

Still, there is much to adore here, especially Dunham's direction, which, even amid potential landmines such as the desperate, pseudo-spontaneous climax of Aura's self-loathing in a scene guaranteed to spark discussion after the film, is inventive and far from tiny.