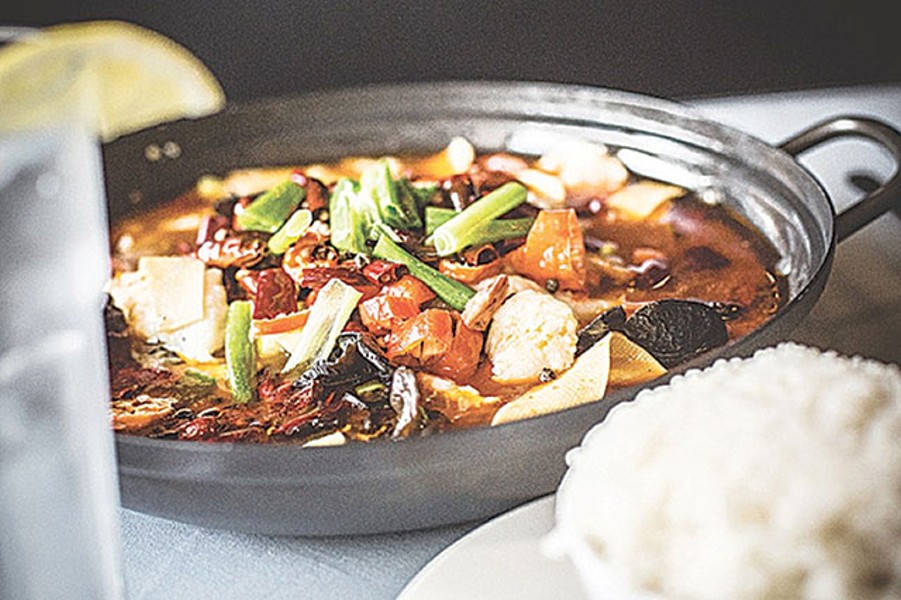 Photos by Rob Bartlett blu on the avenue

These are heady times for the city’s restaurant industry – a recent study found that Orlando has the highest number of eateries per capita than any other city in the nation. Sure, the experientially minded gastronome will undoubtedly decry such empirical statistic-gathering in favor of trusting his or her own tastebuds, but the simple truth is, every quantitative boom has its qualitative ups and downs. In determining our favorite restaurant openings of 2013 we, naturally, focused on the ups, but I’ll admit, cutting the list to just five (sorry, Sapporo Ramen; sorry, Smiling Bison), was a bit of a downer. Here, then, in chronological order, are our top tables of 2013.

After the success of 310 Park South and 310 Lakeside, restaurateur Joanne McMahon’s much-anticipated blu on the avenue surprised us with its understated decor, then wowed us with stellar plates like crisp oven-roasted snapper with white wine butter risotto and coffee-cured duck breast with Sambuca demi-glace. Desserts, such as airy-yet-rich peanut butter pie, are made to impress – a given, considering McMahon is a noted pastry chef. Sure, you’ll see your fair share of Park avenue preeners and posers but blu, lowercased moniker aside, neutralizes the pretense.

For a restaurant situated inside the largest Marriott in the world, Siro feel remarkably local, with its rustic interior and stringent focus on home-grown sourcing. The Italian-inspired sharing plates aren’t your standard Disney-area hotel fare – dishes like veal sweetbreads, roasted bone marrow and spicy lamb sausage are luring city slickers to the Osceola County border. Ridiculously good zeppoles and tiramisu will have you lingering, and the post-meal hot-beverage experience is a model for restaurants in the city to follow. Really, you’d be hard-pressed to find anything on chef Anthony Burdo’s menu that disappoints.

Producing a sensation akin to rubbing Tiger Balm on your tongue, the Sichuan peppercorn may not suit everyone’s tastes. But for those hooked on the stinging, pungent and invigorating flavor/feeling of these brazen little buggers, there’s no more vital place than Chuan Lu Garden to get your fill. Do yourself a favor and order the cumin lamb, the spicy fried chicken or the jumbo shrimp with Sichuan chili sauce – describing any of these dishes as “bold” would be an understatement. One thing that can’t be overstated: Whether you like Sichuan peppercorns or not, Chuan Lu should be at the top of your Chinese restaurant considerations.

With a verve for the creative, an inclination to please and a dedication to the craft of sushi, chef Henry Moso is like our very own Jiro Ono: He consistently dreams up ways to fashion and serve sushi to the scores of zealots flocking to his slick strip-mall joint. The Louis Vuitton rolls, sometimes even adorned with 24-karat gold flakes, may be Orlando’s most indulgent, though patrons searching for a clean sashimi fix need not worry – that’s a slam-dunk guarantee. Desserts are hardly an afterthought – they’re just as creative, and the best you’ll find at any sushi restaurant in town.

OK, so the table situation can get a bit tight and the parking totally sucks, but we can’t help but heap kudos on Santiago’s Bodega for transforming the former Logan’s Bistro space into the most inviting and attractive tapas joint in the city. Most of what the kitchen churns out is top-notch, be it short ribs glazed in cherry-hoisin sauce, chunky yellowfin ceviche or garlicky gazpacho. Yes, the dishes are pricey, but they’re of a caliber that significantly lessens the pecuniary sting.

Speaking of pricey, the menu at Hamilton’s Kitchen is an eye-opener. What makes this special-occasion spot worth visiting: the stunning hotel grounds and the tightly focused bill of fare. Chef Chris Windus (formerly of Todd English’s bluezoo) has a delicate hand, but there’s room for improvement, both in front and back of house. Still, you have to believe in a place that serves bacon butter.