They could be heroes

"Phil and I Come to an Understanding," from The Handsome & the Holy, by Ria Brodell
RIA BRODELL: DEVOTION
through May 13 at Cornell Fine Arts Museum, Rollins College, 1000 Holt Ave., Winter Park, 407-646-2526, cfam.rollins.edu, free

Acceptance of (or at least acquaintance with) nonbinary and genderqueer humans has arrived with almost whipcrack speed. Not to belittle the struggle that still exists, but five years ago, the idea that most of Middle America would watch a television show starring a former Olympic men's track and field champion now living her truth as a Beverly Hills reality TV star would have been unthinkable.

For some, the freedom to create one's identity from scratch is both exhilarating and terrifying. For Catholic-raised, Boston-based artist Ria Brodell, it's a process of imagination underpinned with rigorous research.

In the exhibition Devotion at the Cornell Fine Arts Museum in Winter Park, Brodell's painted representations of queer identities mined from history are juxtaposed with religious objects from CFAM's permanent collection. Brodell subverts the construction of gender binaries in religious and historical narratives, and creates space for a reverent look at gender-nonconforming identities.

Brodell's Butch Heroes is a series of portraits of individuals from many walks of life and many periods throughout history, such as "Olga Nikolaevna Tsuberbiller, 1885-1975, Russia" (a noted mathematician and educator), "Biawacheeitche or Woman Chief aka Barcheeampe or Pine Leaf, ca. 1800-1854, of the Apsáalooke Nation" and the vivid and fiercely independent personality of "Jones or Jonesie, born ca. 1920, Jamaica." All of them have certain things in common – they are people who were assigned female at birth, had relationships with women and presented in a more masculine than feminine manner. Brodell says in a phone interview, "I paint what strikes me about these individuals, what moments in their lives that I want to depict – their jobs, their death, their partners." 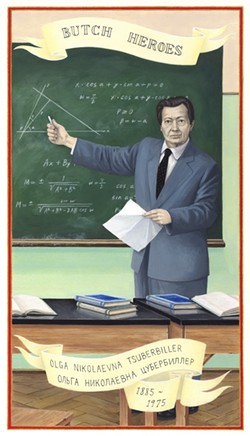 The artist pores through historical documents, photographs and correspondence in order to develop a visual language which accurately depicts these people in a way that reflects their self-representations and presence in the world. Brodell's portraiture style amplifies queer histories that have often been hushed and relegated to the private sphere. The compositions are accompanied by wall text containing short, biographical statements about the individuals in the paintings, describing and recognizing their personal and professional accomplishments and adversities.

But alongside Butch Heroes, Devotion also includes The Handsome & The Holy series. In these intimate gouache paintings, Brodell employs motifs and formal strategies associated with devotional imagery, specifically Catholic prayer cards, such as gold borders and overlaid text. Prayer cards are small, portable devotional icons, allowing the holder to carry their chosen aspirational figures with them wherever they travel. They are historically mass-produced, but Brodell chooses to execute their take on these objects through the tradition of painting – a process of creating that is decidedly not mass-produced. Brodell invokes associations with devotional imagery as a way to represent role models – "people you look up to, who you strive to be," the artist says – and the meticulous style in which they are depicted reflects this admiration.

In addition to these figures drawn from history, Brodell's self-portrait in the exhibition, "Self-Portrait as a Nun or Monk, ca. 1250," allows a glimpse of insight into the artist's own self-presentation and image. The painting depicts two figures representing the artist, one dressed as a nun, the other a monk, gazing into each other's eyes, a modest distance apart, hands clasped. There is a quiet reverence in the delicate execution of these self-representations, a devotion to self and a gentle resistance to the limitations of gender in expression of self.

The action of inserting historically suppressed identities into areas of historical canon recalls work by Henrik Olesen, Some Gay-Lesbian Artists and/or Artists Relevant to Homo-Social Culture Born Between c. 1300-1870 (2007), in its revisionist sensibility, as well as its rigorous interrogation of historical archives. Brodell elaborates on the function of shedding contemporary light onto queer identities of the past: "These are not new identities. There have been many cultures around the world with multiple gender identities. Colonization and Christianity have enforced a gender binary."

Brodell's works push against the idea of these identities being hidden from public knowledge, while encouraging a celebration of devotion in its myriad of forms.