I lost my head for Marie Antoinette.

She was dazzling and surreal, like something that walked out of Terry Gilliam's dreams. With her wild blonde hair holding a ship aloft and her dress made of maps, she reminded us that the world is big, but our imaginations can make it bigger.

Bon Voyage, Charlotte, a Marie Antoinette-inspired ensemble designed by Kyana Wilborn, was one of many that blew the audience away at Trash 2 Trends, an Evening of Recycled Fashion. The show, which took place on Feb. 6 at SeaWorld's Ports of Call, featured clothing made entirely from repurposed materials.

The event is an annual fundraiser for the City of Orlando's nonprofit organization Keep Orlando Beautiful, an affiliate of Keep America Beautiful. If that name sounds familiar it's because Keep America Beautiful is the organization that guilted the bejesus out of us all with its 1971 anti-pollution commercial featuring "the crying Indian," in which Native American actor Chief Iron Eyes Cody sheds a single tear after seeing what a mess this once-pristine country has become. Unless you were a little sociopath in the '70s, once you'd seen the crying Indian commercial, you'd just as soon swallow your Bazooka Joe wrapper than litter it. Back then, we didn't have the option to "skip this ad," and, in this case, we were better for it. 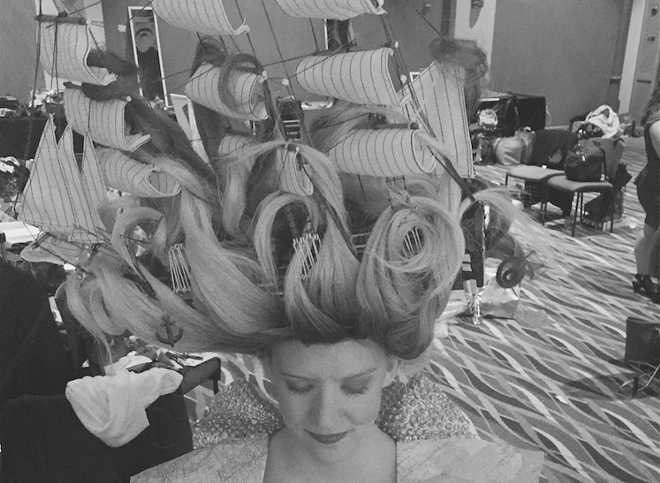 We were better for seeing Trash 2 Trends, too. According to Trash 2 Trends coordinator Jody Buyas, the show is inspired by the idea of "bringing art, fashion and sustainability all together in an innovative way to help bring awareness to Keep Orlando Beautiful and the way we think about trash." Certainly everyone in that audience saw their "junk" as "materials" after the show. Award-winning designs included Nancy Alonso's sweet strapless dress "The Wave," made from hospital throwaways, and Helaine Schneider's "Transformation," a dress that morphed from a punk-rock mini to a red-carpet gown made from a sign company's Dumpster scraps.

There was much more, but for me Charlotte took the cake.

Marie Antoinette, says designer Wilborn, "once wore a ship in her wig," and that over-the-top topper inspired Wilborn, who works in creative costuming at Walt Disney World. The ship was a discarded donation woven into the model's hair by Jacob Boudreaux. "Without him her hair would have been a shipwreck," she says via email.

"I have wanderlust!" Wilborn says. "I tried to incorporate city, state, country and world maps into the dress. The whole bodice is woven out of Florida state maps my sister and I have picked up on our road trips."

And thankfully for people like me, you don't even have to be competent with grown-up scissors to make your own conservation-minded clothing.

"Restyling" is a great way to spiff up your closet, Wilborn says. "Make a plain piece pop by adding some embellishments such as sequins, studs or lace. You don't have to be skilled; just have fun creating something new."

And it gets even easier, being green.

"Donating is the best and easiest way to recycle clothes," Wilborn says and shockingly, according to the Council for Textile Recycling, only 15 percent of textiles in the United States are donated; 85 percent go to landfills. That's a lot of trash. Plus it deprives pinchpennies like me a chance to treasure hunt for your stuff in the thrift store.

In all, Trash 2 Trends was a great evening with a lot of reminders that the world is indeed a big place and can be a much prettier one with some imagination and just a little extra effort to be a little less trashy.

Seriously. I mean it. Don't make me get the crying Indian.