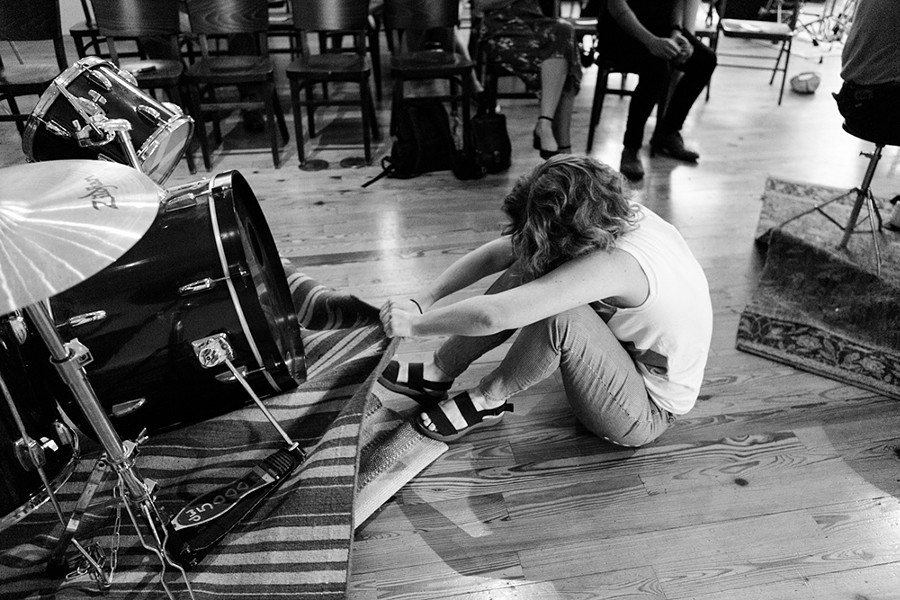 Remember the tragic story last week of the owner of a tow truck company senselessly shot dead by a man trying to steal his car back? Well, that victim was Paul Gren, and he was also an important part of Orlando music history as the owner of Ultraviolet (or UV), a late-night club that, like the Abyss, was crucial in the underground of the legendary '90s Orlando house music scene. He should be remembered for that.

Noise was the spotlight of the latest edition of the vanguard In-Between Series featuring two notable visiting artists: Rat Bastard and Anna Mikhailova. There are multimedia artists and there is Anna Mikhailova. She's an experimentalist who expresses in practically every medium imaginable. Some of these include music, voice, performance art and stage design – all of it fiercely modern. And Rat Bastard is, of course, the infamous noise music icon from Miami and the father of the International Noise Conference.

Despite her sprawling artistic repertoire, Mikhailova is no tourist to noise. Her means and methods are advanced and deeper in craft than most. Beyond just basic digital impressionism, her performance employs lots of singular handmade instruments that involve odd non-musical objects arranged and bent in electronically mystical ways, works of art themselves. And she blends the babel with spoken word, adding drama and humanity.

Befitting his legend, Rat Bastard's rig was also incredibly original, involving a series of motion sensors in front to trigger sound and light. And apropos to the occasion, his set sounded like the in-between static of lost radio transmissions, only cranked up, made primary and wielded into a vortex with its own will.

But, really, LMFAO could've been the headliner and I still would've turned out just to see berserk Orlando percussion hive SSLOTS, a drum corps more indebted to noise than any conventional rhythm theory. As an almost entirely improvisational group, truly no two shows of theirs are alike. Consistency and predictability are in neither their modus operandi nor their mission. I've seen them perform in all manner of arrangement and the result is always savage art.

This time, they spread out with a fully armed drummer occupying each of the four corners of the room. The effect was live quadraphonic sound without any speakers. At least that's how they started out. As their sonic convergence grew, the players gradually migrated toward a physical nucleus at the gallery's storefront, piece by drum piece, all without a pause. What began as wild individual voices communicating got exponentially wilder, became cumulative, and ended up a collective beast.

Together, the SSLOTS experience is a rhythm voyage that turns ensemble extempore performance into an organism and is pure, unchained dynamism in motion. Don't fucking dare call them a drum circle.

Sheer Mag is a young band that's rising hard with lots of street heat, enough to all but guarantee that their debut album (Need to Feel Your Love), slated for July 14 release, will pop off. And from the full, buzzing and rowdy house that received them, Orlando knows the deal.

If a pure rock & roll dance party could be bottled, a Sheer Mag show is what it would look and sound like. They may be from Philadelphia but there's a lot of Detroit gold in their shine. It's '70s rock glory done with classic punk spirit and delivered by a singer who is a goddamn boss with a knock-down voice. I haven't felt this much early fire from a band in a long time, and this show testified to their phenomenon. Punk has been flirting with the '70s for a little while now, but this is the act that could possibly tip that sea change. Revivalism never felt so fresh.

Of the all-good local openers, the surprise revelation was Flamethrower, a new band containing members of modern thrillers False Punk and Gross. Like those bands, these guys have a roar that comes on like an avalanche, and it's some of the most exciting hardcore to rise here in a while.