You can find shrimp and grits all over Central Florida. Or you can make it yourself 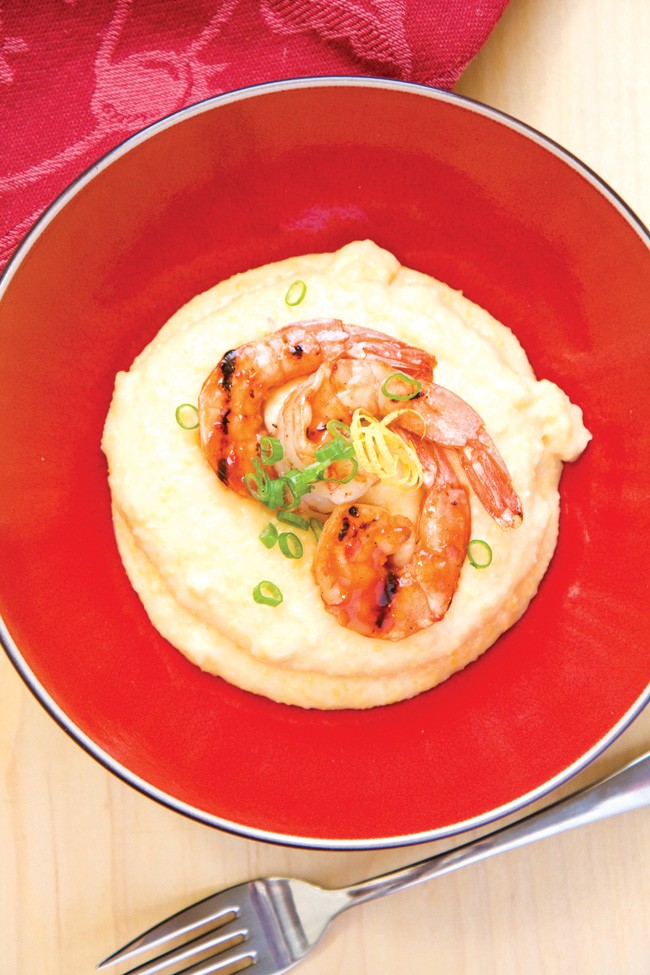 My wife and I used to rejoice every time we discovered shrimp and grits on the menu of another restaurant. Like the dish, we both come from South Carolina, and it felt like a personal welcome. But eventually we began to wonder if these offerings weren’t kind of like those fake Southern accents folk singers tend to adopt.

Either way, shrimp and grits is the new, post-fancy-mac-’n’-cheese comfort-food trend everywhere from restaurants humble to haughty. Taste aside, the dish is appealing because it’s simultaneously down-home and exotic. It’s hearty and yet somehow light (shrimp are high in protein and low in fat). It’s more substantial than mac and cheese; it can be devoured as an entrée for breakfast or dinner.

Because the otherwise bland grits are a perfect sop for the flavors of the shrimp and sauce, shrimp and grits gives chefs a lot of room to experiment, and as a result the styles are as varied as the restaurants. But the truth is, this crustacean-and-hominy combo is a simple meal best cooked in your own kitchen.

Restaurants like to use heavy cream, but for my money it overwhelms the grits and makes the dish too rich. When it comes to grits, you want them (OK, I want them) to be more Waffle House than “creamy polenta.” You can use a little milk, but water and a pinch of salt work best.

Coarser stone-ground grits are preferable, but they’re hard to find around here and much more expensive. Regular old grits are fine. Quaker’s grits will be your best bet; they run about $2.50 a pound. Whatever you do, don’t use instant. The hominy is too finely ground and processed and will never reach the right consistency.

Specific directions can usually be found on the package – some variation of pouring the grits into boiling water, turning it down to a simmer and covering the pot. Stir them often so they don’t get gloppy. That’s the worst thing that can happen to your grits. If they’re too runny, just keep cooking, and if they get too thick, add a little more water. If they’re too gloppy, you might as well start over.

You should let them cook for at least 20 minutes, but they can simmer much longer if your shrimp aren’t ready or your date is late. Finally, if you want, you can throw in some shredded cheddar cheese about two minutes before you take the grits off the stove.

As for the shrimp, the smaller the better. Fresh-frozen Florida shrimp are easily procured from Wild Ocean (they freeze their catch right on the boat) at the Monday-night Audubon Park Market at Stardust Video & Coffee (1842 E. Winter Park Road). Lombardi’s Seafood (1152 Harmon Ave., Winter Park) is another good source of local shrimp, but use whatever works for you. In the Lowcountry, this dish is traditionally made with small river or creek shrimp. Large shrimp have a coarser, chewier texture that doesn’t go with grits – and especially not grits with heavy cream.

I use about a pound and a half of medium shrimp to cook for four, but if you can afford it, use more. My mom once told my dad’s mother, “There are too many shrimp in this.” My grandmother replied, “There is no such thing as too many shrimp.”

My grandmother sautéed her shrimp in (a lot of) butter, a squirt of lemon juice, a dash of lemon pepper and maybe a splash of beer. Add to the hot grits – that’s it. It’s clean and fresh and simple. The butter and the lemon bring out the flavor of both ingredients so that the shrimp come off as the ideal buttery complement to the grits. It goes well with coffee, eggs and toast, and is the perfect breakfast version of this meal.

For dinner, you probably want something with a wider variety of flavors. Over the years, my wife, her mother and I have modified a traditional Charleston, S.C., recipe to meet our tastes.

Put some chopped tomatoes, green onions, and a pepper or two (whatever kind you have or like) in a pan with some butter (or olive oil) and mix them with a little lemon juice, some hot sauce, a shake of Worcestershire sauce and a splash of beer. Let it get pretty well done before you throw in all the raw shrimp you peeled. It won’t take long. Most people overcook shrimp. (This is another argument against big shrimp – they almost make you overcook them.) Stir them constantly so they cook evenly and when they’re just pink and firm, turn off the heat.

Then you can help yourself to a big old scoop of grits and ladle on the steaming shrimp and sauce. Put on a bit more cheddar, stir it up and enjoy.

Home cooking is traditional precisely because of the gradual innovations that develop over the years. There’s no reason not to add sriracha hot sauce to your shrimp and grits; it’s an improvised meal. But the trick, as with everything, is not to add so much that you lose the flavors and textures that worked together in the first place.