Trump can only outrun incompetence for so long. But when all else fails, there’s always racism 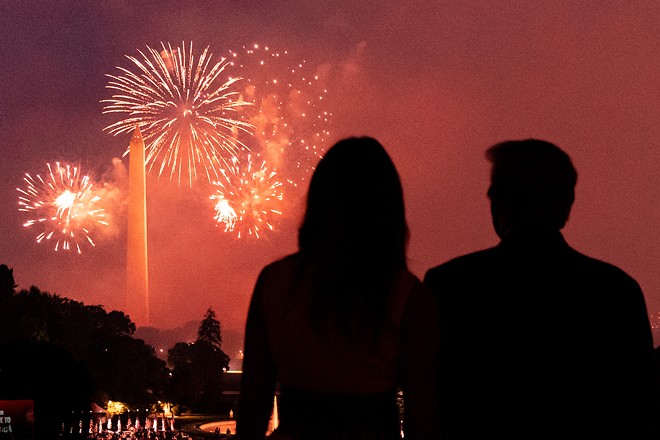 In hindsight, it was inevitable that we’d end up here.

We didn’t know what here would look like, exactly. But you can only outrun incompetence so long, and you can only place so many self-interested, high-risk bets before one blows up in your face.

And so the Fourth of July weekend found Donald Trump at the nadir of his presidency.

With 130,000 Americans dead from COVID and the country speeding toward 100,000 new cases a day, the White House announced its surrender: “We need to live with it,” an adviser told NBC News, a grotesque admission of failure from a president who refuses to wear a face covering in public, who hosted a thousands-strong White House event at Mount Rushmore on Friday night with neither masks nor social distancing, and who relocated his nominating convention from Charlotte to Jacksonville because the former wouldn’t guarantee a packed arena of unmasked celebrants.

That late August convention, meanwhile, is a shambles. The GOP sunk nearly $40 million into Charlotte that it won’t get back. Now, with Florida logging upward of 10,000 new coronavirus cases a day, donors are wary of shelling out for another convention that might not take place. What’s more, Jacksonville recently enacted the same kind of mask mandate that drove Trump out of Charlotte.

Four months before the election, Trump is grasping for silver linings. Having downplayed the coronavirus from the start, desperate not to spook the economy, and demanded that governors allow businesses to reopen despite the lingering pandemic, he took a victory lap following Friday’s jobs reports, which showed the economy adding 4.8 million jobs in June.

“All of this incredible news is the result of historic actions my administration has taken,” Trump boasted at a hastily called news conference.

Of note: The Department of Labor conducted its jobs survey during the second week of the month, when the country was seeing about 25,000 new COVID-19 cases a day. By early July, that number had risen to more than 50,000; in response, several states walked back their reopening plans, which will dampen whatever economic progress was being made.

Trump might be the last person to recognize that controlling COVID and restarting the economy are irrevocably linked; the second won’t happen without the first. And now that he’s apparently given up entirely on the first, the second seems unlikely without a vaccine. In other words, this is probably our status quo for another year or so, maybe more.

On top of all of this, there’s the news that Trump was informed in February – or as early as last year – that the Russian government was paying the Taliban to kill American soldiers in Afghanistan and not only did nothing about it, but insisted on getting Russia into the G-7. The White House’s explanations – that Trump didn’t read the presidential daily brief, or that he wasn’t told – are bad. The alternative – that he knew and didn’t care – is worse.

Perhaps, then, it’s no surprise that Trump is down nearly double digits to Joe Biden. Democrats appear likely to expand their control of the House and retake the Senate, too. The usual caveats apply. But barring a dramatic recovery, Trump might take his party down with him. Honestly, it couldn’t happen to a nicer bunch of sycophants.

I’m not here, however, to dance on graves. I’m here with a warning.

There are 16 weeks until the election. After spending his presidency preaching to an already-devout choir and basking in their praise, he’s popular among Republicans, but he’s loathed by nearly everyone else. He has one card left to play.

It’s no secret that the president’s political career was built on stoking white racial anxieties. His targets in 2016 were mostly Mexican immigrants, Central American refugees and Muslim “terrorists” – the Others stealing your jobs, murdering your sons and raping your daughters. This year, however, Trump has found a new foil, a new threat to the culture he claims to represent, one closer to home.

Quite simply, Trump wants to pit MAGA America against everyone else. Or, as he described them this weekend, “the Marxists, the anarchists, the agitators, the looters” who wish “the end of America.”

His July 3 speech at Mount Rushmore, which included an oxymoronic reference to “far-left fascism,” starkly divided the country into law-abiders and criminal agitators – a hallmark of authoritarian regimes, for what it’s worth. There was no acknowledgment of police violence or systemic racism, no recognition that the Black Lives Matter movement has effected change in city after city, no sympathy for Black communities that live in the shadow of monuments to traitors who fought a war to enslave them.

Instead, there were the “left-wing cultural revolutionaries” who want to destroy Mount Rushmore (never mind that it exists on land stolen from Indigenous people) and were waging a “merciless campaign to wipe out our history, defame our heroes, erase our values and indoctrinate our children.” There was dire talk of “angry mobs” unleashing “violent mayhem.” There was a denunciation of “cancel culture” silencing political opposition, which he likened to “totalitarianism” – a word he might not fully comprehend, considering his party controls the White House, Senate and Supreme Court.

It’s not hard to read between the lines, especially in context: Trump has recently retweeted a video of a Florida supporter shouting “White power,” called “Black Lives Matter” a “symbol of hate” and, on Monday, tweeted explicit support for the Confederate flag. People of color and their allies, Trump is telling his overwhelmingly white base, want to silence white people and erase white culture. He’ll restore “law and order” and preserve “our” culture.

These are the fault lines Trump will spend the next 16 weeks fomenting and exploiting – a strategy, I fear, that will prove extraordinarily dangerous should it work and will salt the earth if it doesn’t.

Again, it was inevitable that we’d end up here.