Trump is in banana republic territory, eager to use government powers to crush anyone in his way 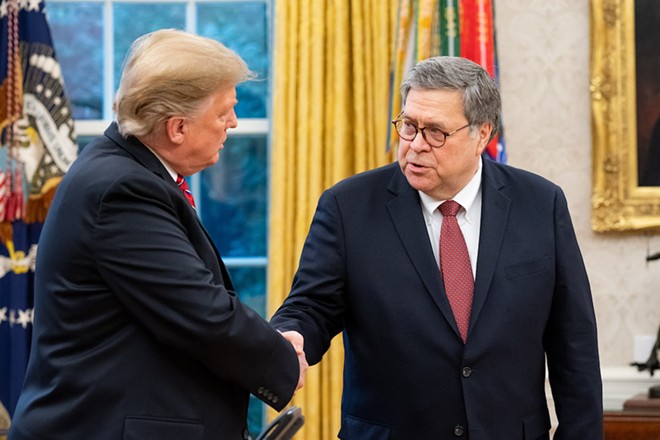 It’s all out in the open now. That’s not to say it was well-hidden before. It wasn’t; if you wanted to look, it was blindingly obvious. But if you’d rather not see what was right in front of you, there was at least a thin veneer of deniability. They’re not even bothering with that anymore.

Post-impeachment, and with a craven party behind him, an emboldened and unchecked Donald Trump has made clear that he’ll weaponize the powers of his administration – especially the obsequious Department of Justice – to punish enemies, reward allies, and gin up scandals and pseudo-scandals to aid his re-election. He won’t try to hide it. He doesn’t care if you know. He’ll push the limits of presidential authority, and he knows Congress won’t stop him.

Consider the last week: First, following a Trump tweet, Attorney General Bill Barr’s office announced that it had overruled career prosecutors’ sentencing recommendation for Trump henchman Roger Stone – who’d been convicted of obstructing Congress and witness tampering, and who refused to tell Robert Mueller what he knew about the Trump campaign’s links to WikiLeaks – prompting them to quit in protest. Trump publicly congratulated Barr for “taking charge” of the case and went on a Twitter rant attacking the judge and the departing prosecutors.

We then learned that not only had Barr similarly intervened on behalf of disgraced former national security adviser Michael Flynn, who’d pleaded guilty to lying to the FBI during the Mueller probe, but that he’d also assigned another prosecutor to review Flynn’s case, yet another extraordinary example of political interference.

In addition, he also removed Jessica Liu, the U.S. attorney for Washington, D.C., who was overseeing the Stone case and – more important to Trump – an investigation into former FBI acting director Andrew McCabe, who’d authorized agents to investigate Trump for obstruction of justice in 2017. The DOJ’s inspector general had referred McCabe to prosecutors, alleging that he’d lied to investigators about a media leak. But Liu never brought charges, and on Friday, the Washington Post reported that federal prosecutors decided to close their inquiry. (Not coincidentally, Trump also rescinded her appointment to a top post in the Treasury Department.)

A vindictive president, a pusillanimous party, a stooge at Justice and a country at risk: It's always darkest before the Don. tweet this

On Twitter – and reportedly in private, too – Trump has raged against McCabe and demanded his incarceration. And he’s not the only one.

According to the Post, when federal prosecutors decided not to charge former FBI director James Comey over his handling of memos of his conversation with Trump, the president “complained so loudly and swore so frequently in the Oval Office that some of his aides discussed it for days.”

In January, he similarly lost it when he learned that U.S. Attorney John Huber in Utah had shut down his fruitless years-long investigation – initiated by then-Attorney General Jeff Sessions at Trump’s behest – into Fox News-conspiracy allegations against Hillary Clinton and the Clinton Foundation and Uranium One. So now he’s insisting that John Durham, another U.S. attorney that Barr appointed to investigate whether FBI or CIA agents broke the law during the Russia investigation, put some heads on pikes soon, in time for the campaign.

That’s on top of his suggestion that the army punish Lieutenant Colonel Alexander Vindman – whom Trump removed from the National Security Council – for the “crime” of testifying against him and his threat that Representative Adam Schiff, a “corrupt politician” and “very sick man,” will pay a “price” for impeaching him.

And it’s also on top of his demand that New York “stop all of its unnecessary lawsuits & harrassment [sic]” in order for the Department of Homeland Security to allow the state’s residents to use the Trusted Travelers program. (The DHS forbade New Yorkers from using it in retaliation for a law that allowed undocumented immigrants to obtain driver’s licenses.) New York, of course, has filed numerous lawsuits against the administration’s anti-immigration policies. More to the point, perhaps, the state’s attorney general is also investigating the Trump Organization and actively pursuing Trump’s bank records.

The Post summed it up in a bone-chilling lede last week: “President Trump is testing the rule of law one week after his acquittal in his Senate impeachment trial, seeking to bend the executive branch into an instrument for his personal and political vendetta against perceived enemies. And Trump – simmering with rage, fixated on exacting revenge against those he feels betrayed him, and insulated by a compliant Republican Party – is increasingly comfortable doing so to the point of feeling untouchable, according to the president’s advisers and allies.”

This is banana republic territory – a wannabe despot eager to use the might of government to crush anyone who gets in his way.

Facing a backlash to his intervention in the Stone case, Barr tried to mount a defense. In an interview with ABC News, he insisted he wasn’t Trump’s stooge, that Trump hadn’t told him what to do, that he planned to change the sentence recommendation before Trump tweeted, that Trump needed to stop tweeting about DOJ matters because it was making his job “impossible,” that he was “not going to be bullied or influenced by anybody.”

The national media bought the charade, saying Barr was “pushing back” and asserting his independence. But Trump’s reaction was the tell: “The President wasn’t bothered by the comments at all and [Barr] has the right, just like any American citizen, to publicly offer his opinions,” his press secretary responded.

This was, in other words, the only time the president had been publicly “rebuked” by a subordinate – by anyone, really – and not flown off the handle. He was, instead, magnanimous. The next day, he simply asserted that he’d tweet whenever and whatever the hell he wanted, and Bill Barr, who’d just said those tweets make his job “impossible,” didn’t quit.

Weird how that worked out.