At the corner of Maitland Avenue and Maitland Boulevard, the Holocaust Memorial Center's curvy white building is squeezed between tennis courts and a small courtyard, part of the Jewish Community Center. The exhibit Two Regimes takes up one room's walls with about 40 paintings depicting life for Jews living in Mariupol, Ukraine, caught between the Stalin and Hitler regimes. From this industrial port town on the shore of the Azov Sea to a ramshackle stilt house in north Florida, the exhibit is a strange tale, partly told.

Artist Nadia Werbitzky's 40-odd paintings soulfully illuminate her mother's memoir of the times between the two World Wars. After surviving several concentration camps, Werbitzky and her mother, Teodora Verbitskya, emigrated first to Germany, then to Canada, ending up in Baltimore. How her paintings came to rest under a Florida Cracker stilt house is still a bit of a mystery, confessed exhibit co-curator Kelly Bowen in a recent talk at the Holocaust Center.

The work was discovered by Mimi Shaw, then an acting coach in Tallahassee in the late 1990s. A student advised her of an interesting garage sale, so she went, and she discovered Verbitskya's memoirs and many of Werbitzky's paintings slowly rotting in an old house about to be demolished. Foresight and determination helped Shaw and her friend Bowen rescue, and eventually restore, the artwork. 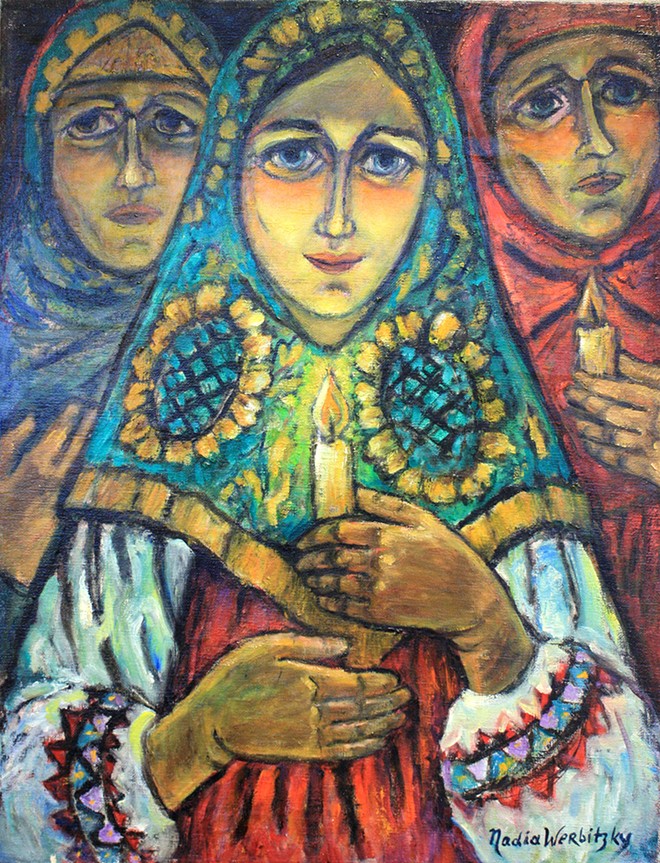 Werbitzky studied at the Art Academy of Dusseldorf after the end of World War II, developing her own style that references European masters like Van Gogh and Matisse. Haunted by her memories, she carefully depicted real people living through real events. When her work was subjected to authoritative Holocaust scholarship, the people she claimed to have represented in her paintings were found to be real, and so they are memorialized, as she put it, as "people who lived and breathed on this Earth."

So much of our Holocaust education is about numbers: 6 million Jews; 23 main concentration camps, and so on. The suffering, however, cannot be abstracted into numbers and it is brought to extraordinary life in Werbitzky's beautiful paintings. "Hell's Threshold" is a good example. It depicts the October 1941 Nazi roundup of 7,500 Jews in Mariupol. Standing in the back of the line, the woman in the pink dress was a friend of Verbitskya's, a fact later verified by others. Wearing a blue dress, a woman rushes around the corner to the back of the line with a young baby in her arms and pulling along her daughter, who is clutching a large doll. Again, a specific memory of a specific person: this time, Werbitzky herself.

The book Two Regimes puts the paintings and memoirs together, bringing old Russia to life, both good and bad. This touring exhibit evokes awe for its subjects and respect for the calm approach the curators have taken to restore and exhibit Werbitzky's work. Two Regimes is worth seeing for both its artistic depth and its unique eye on this terrible time. If it happened then, it could happen again.