The very nondescript Crystal Lake Plaza on Curry Ford Road has established itself as a bazaar for bon vivants of sorts, and not just because of "The Beef People" at Winn-Dixie. Over the past few years, Theo's Kitchen, Roque Pub, Papa Llama and JJ's Fresh have all burrowed themselves into the plaza's aging (and affordable) confines, bringing a plurality of flavors to a rapidly diversifying Curry Ford West.

In that mix is Uncommon Catering, the boutique company run by Tara Vernau-Smith and her husband, Travis. It originated at East End Market before the couple moved operations here to Camp Crystal Lake. It's no horror setting, not by a long shot, but I like the thought of a billboard with a hockey-masked Jason Voorhees proclaiming, "The food here absolutely slays!"

Agreed, allusions to Friday the 13th are a curious ploy, but I couldn't possibly use a common device to describe the fare at Uncommon Catering, now could I? Not with a menu featuring a hodgepodge — albeit a focused hodgepodge — of such varied items as bao, empanadas, poke, chicken and biscuits, and charcuterie boards. Admittedly, I didn't anticipate such an amalgam of killer offerings (probably the '80s camp counselor in me), though I probably should have.

It's a fetching space, this eatery, not without aesthetic parallels to the lounge at Reyes Mezcaleria, with its knick-knack-filled shelves, mod lighting fixtures and mirrors, and cozy seating. But UC's dishes are perhaps more linger-worthy than their trappings. I found myself staring at the colorful ingredients of the citrus beet salad ($11) for a good long while before digging in — mixed greens and plump blueberries were tossed with rosemary-roasted walnuts, goat cheese crumbles, the salad's requisite roasted beets and clementine segments. It all looked so vibrant and seductive served inside a gleaming white bowl sitting atop a veined slab of quartz. It tasted even better, especially when drizzled with a citrus-basil vinaigrette.

But when empanadas stuffed with olive-tanged picadillo beef ($10) and bao buns enveloping grilled, Tajin-flecked achiote-orange shrimp ($12) were set before us, I knew the eatery was about more than just looks. The guac, toasted pepitas, pickled red onions and adobo aioli added visual allure to the trio of bao, but it also lent a proper heft. My quibble was with the jalapeño-cilantro sour cream served with the empanadas – it, conversely, made each bite too weighty. A lighter dip with the same amount of kick would make for a more balanced chew. 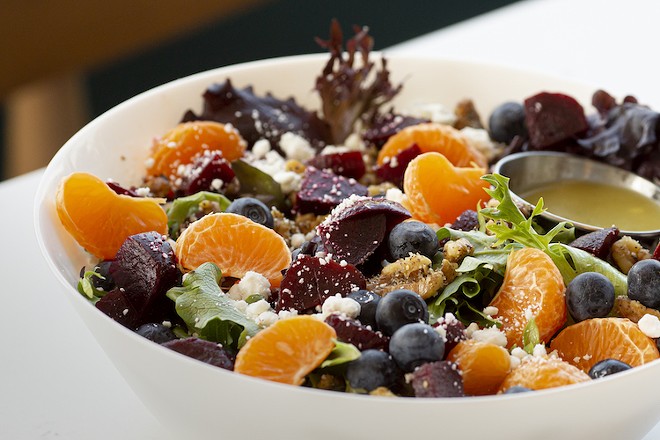 Tara's a Pennsylvania transplant, so it's no surprise she pays homage to DiNic's inside the Reading Terminal Market with a herb-roasted pork sandwich ($12). The shaved tenderloin is served on a hoagie from Amorosa's (not Sarcone's) with sharp provolone, broccoli rabe and banana peppers — an add-on Tara says gives the sandwich some zing. She's right, and she serves it with a pork au jus to make one helluva sandwich. We enjoyed it with fries ($4) seasoned with Moroccan spices (cumin, smoked paprika cinnamon to name a few) and served with a pear-ginger jam. The fries went well with the lump blue crab cakes ($14) as well, which, by the way, were disposed of in a matter of seconds.

And in what I can only describe as a gluttonous fit, so were the superb strawberry-lavender and blueberry-lemon double cheesecakes ($4), both made in house and both paralyzingly indulgent. They were Uncommon's coup de grâce. One spoonful was like Jason striking a death blow to one of his unsuspecting victims. It was curtains, lights out, finito.