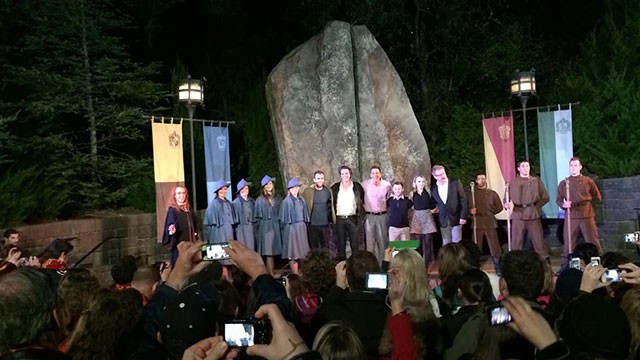 His book series is now over 15 years old, and his film franchise finished in 2011, but time hasn’t yet dampened the fervor of the Boy Wizard’s fans, judging by the robe-clad crowds filling Universal Orlando for last weekend’s Celebration of Harry Potter. They stood in line more than two hours to enter the Harry Potter Expo, a soundstage of trade-show booths; then they stood to see film series stars like James and Oliver Phelps (Fred and George Weasley) and Matthew Lewis (Neville Longbottom) onstage in Friday’s frigid Harry Potter Tribute show; and finally, they stood in line some more for wand combat master classes with choreographer Paul Harris, who brutally corrected my second-position plié like a ballet master.

The weekend’s events were carefully scripted, save for a few marvelously unguarded moments, like when my new hero Evanna Lynch (Luna Lovegood) spoke for all fans by complaining about Dumbledore’s missing funeral in the sixth film, and the “jarring” transition between Islands of Adventure’s Lost Continent and the Wizarding World of Harry Potter; or when an adoring crowd of autograph-seekers trapped the actors on the Three Broomsticks’ back patio for the bulk of Saturday night’s private party. The real surprises had actually come a few days earlier, when Universal unveiled new expansion details via Wednesday’s live webcast.

Regular readers of OW have already heard many of the recently revealed “secrets,” as I’ve been sharing leaks about the London-themed Potter project that’s replaced Jaws ever since the big shark jumped over two years ago. In case you’ve been hiding under a whomping willow, Universal is building on the phenomenal success of the Wizarding World of Harry Potter at Islands of Adventure – home to Hogsmeade, Hogwarts Castle and the world-class Forbidden Journey ride – by building a new area next door at Universal Studios Florida, based around the enchanted English shopping district where wizards stock up on magical supplies.

After Diagon Alley debuts this summer (I predict a mid-June grand opening), the two lands together will form “the first centrally themed multi-park experience” in the attractions industry, and a direct rebuke to Mickey’s molasses-slow progress on Animal Kingdom’s Avatar-land. Here’s a hint of what you’ll find when the construction walls – which recently had peep holes installed for easy observation – come down, and you can finally pass through the wall of moving bricks (a combination of forced perspective and physical effects) into Diagon Alley:

Harry Potter and the Escape from Gringotts is the slightly awkward official name of the expansion’s headliner attraction (hey, at least they didn’t tack on “the Ride 3-D”). It’s a “multi-dimensional multi-sensory” indoor dark-ride/roller coaster that resembles the love-child of Universal’s Mummy and Transformers rides. The recreation of the goblin-run bank’s trains seen in the first and final film will be thrilling, but more family-friendly (read: lower height requirement) than Hogwarts’ E-ticket. Equally impressive is the escaped fire-breathing dragon perched atop the entrance’s tilted column, which art director Alan Gilmore assured me is “amazing … so huge and detailed, it will look real!” Here’s hoping Universal can keep him working, unlike Disney’s Disco Yeti.

Kings Cross station serves as home to the Hogwarts Express locomotive, which will ferry guests to the other park and vice versa. After stepping through the wall at Platform 9 3/4, riders will board immaculately detailed carriages and watch virtual “windows” which display one of 400-plus combinations of Potter creatures and characters along the way. The catch: You’ll have to have a “park-to-park” ticket or annual pass to climb aboard.

Knockturn Alley, an indoor arcade devoted to the dark arts, will house Borgin & Burkes’ emporium of interactive evil artifacts. Carkitt Market will feature street vendors and live entertainment under a glass canopy. Together, they should give some much-needed shelter from the summer sun and storms. Other shops in the area include Wiseacre’s Wizarding Equipment, Quality Quiddich Supplies, Magical Menagerie (plush toys), Madam Malkin’s Robes for All Occasions and Weasley’s Wizard Wheezes, which will absorb Zonko’s toy inventory when that shop shutters soon. The Leaky Cauldron will serve Brit pub fare like fish and chips and bangers and mash, and Florean Fortescue’s Ice Cream Parlour will serve fantasy flavors like strawberry peanut butter and Butterbeer.

Speaking of Butterbeer, I was among the few guests to test warm Butterbeer, a brand-new beverage that resembles a sweet vanilla chai tea latte with marshmallow foam. Look for it to be another blockbuster moneymaker when formally introduced in the upcoming months.

I wasn’t among the lucky few journalists invited on last week’s hard-hat tour of the construction zone. But Huffington Post reporter (and former OW columnist) Jim Hill was, and he’s impressed. “It’s one thing to see the concept art; it’s quite another thing to stand down in the depths of it and look up and realize that they committed, they didn’t stint,” he told me. “They realized that when you do super-quality detailed [work], people lust after it.” His only worry is where all the guests are going to fit: “When you stand on the street and look up Diagon Alley, it’s tight, but it has to be tight because that’s how the movie was. There’s a slightly claustrophobic feel … There’s going to be a learning curve.” However they work it out, “It’s going to be a fascinating summer!”