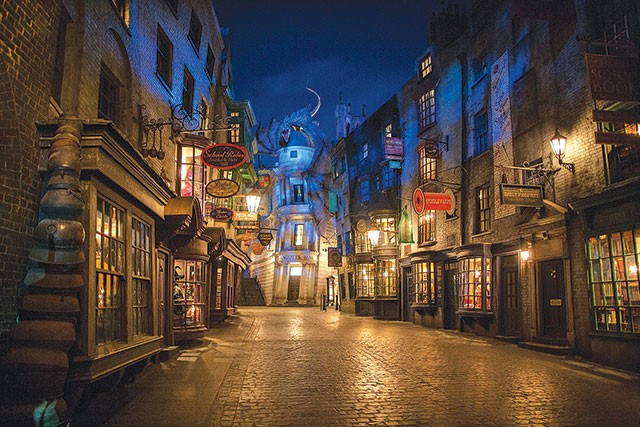 “Immersive” is a buzzword that gets thrown around Orlando often, but vanishingly few attractions around the world actually feel like an alternate universe instead of an artificial amusement. On that tiny list, you can now place The Wizarding World of Harry Potter – Diagon Alley at Universal Studios Florida at the very top. Four years and a day after Islands of Adventure’s original Potter area opened, journalists got our first look inside the anticipated sequel ahead of its July 8 public premiere, squeezing inside J.K. Rowling’s magical shopping mall for a star-studded party within the new gold standard in themed environments.

Standing in the shadow of a giant fire-breathing dragon while interviewing Today Show co-hosts Natalie Morales and Willie Geist (Kathy Lee and Hoda didn't attend because they “found out Butterbeer was non-alcoholic,”Morales quipped) and rubbing elbows with Robbie Coltrane was certainly surreal, but not nearly as deliciously disorienting as the world Universal designers Alan Gilmore, Mark Woodbury and Thierry Coup have wrought. After closely following the new expansion's development since its inception, I thought I already knew every secret hiding behind the magical moving wall (which doesn't actually move, thanks to safety concerns) but even after a dozen hours inside I was still discovering new surprises.

The highest compliment I can pay to Diagon Alley is to say it reminds me of Disneyland’s New Orleans Square and Epcot’s Morocco Pavilion (both organic places you can truly feel lost in), only on an infinitely grander scale. Like the first Wizarding World’s Hogsmeade Village, Diagon Alley’s windows overflow with whimsical animated displays, but they aren’t merely shallow facades: You can enter these storefronts’ prop-laden interiors. Better yet, new $45 interactive wands (which I shared spoilers about in earlier columns) allow spell-casters to activate effects with a swish and flick, becoming participants instead of passive tourists.

Said shops, which include Madam Malkin’s Robes for All Occasions and Weasleys’ Wizarding Wheezes, sell unique souvenirs, from Scottish wool sweaters to Skiving Snackboxes. You can exchange your Muggle money for Gringotts banknotes (Universal’s take on Disney Dollars) that are accepted around the resort while chatting with an interactive animatronic goblin teller. Save some galleons for a snack – like butterbeer soft-serve or chocolate-chili ice cream (it has quite a bite) from Florean Fortescue’s Ice Cream Parlor, or some Gillywater with “euphoric” pineapple-mint elixir – and watch a live performance under Carkitt Market’s vast canopy. The jazzy Celestina Warbeck musical revue and Tales of Beedle the Bard storytellers (with gorgeous Michael Curry-designed puppets) are first-rate examples of smart theme park shows, as is all the entertainment assembled by a team of local talent led by director Mike Aiello, with Anitra Pritchard, Jason Horne, Patrick Braillard and other familiar area actors.

After stuffing yourself silly on stinky cheese and Scotch eggs in the Leaky Cauldron, exit Diagon Alley into the London waterfront (home to the triple-decker Knight Bus, with live conductor and chatty shrunken head) to enter King’s Cross train station for a journey aboard the Hogwarts Express to the other park, provided you purchased multi-park admission. You’ll see commuters before you vanish through the wall at Platform 9 3/4 –the clever Pepper’s Ghost gag just looks like a dark corridor when crossing through yourself –before boarding the series’iconic steam train. Just seeing the lovingly re-created locomotive up close made me misty, and the four-minute journey uses jaw-dropping digital “windows”to make it seem like your favorite characters are in the next compartment.

After all this raving, I was shocked to discover that the signature Harry Potter and the Escape from Gringotts E-ticket attraction wasn’t immediately my favorite element of Diagon Alley. I was the first member of the media inside after Warwick Davis declared Gringotts open, but my first ride on the cutting edge was curtailed mid-climax. I was only stuck for 10 minutes (making me luckier than many that night) and my second run was completed successfully, though with some unsatisfying glitches. Fortunately, I’ve since experienced the ride twice as intended, upgrading my initial “antici-pointed” assessment to a solid five stars.

Most rides recapitulate movie plots with guests as omniscient observers (Peter Pan), or cast riders as protagonists in a new adventure (Star Tours). Gringotts drops visitors directly into the crucial horcrux robbery sequence from Deathly Hallows Part 2, playing secondary characters inserted into the established timeline. It’s an ambitious plot, with some clever winks to the bending of canon, and is skillfully explicated via the exquisitely convoluted queue’s multiple pre-shows, including a simulated elevator (shades of Epcot’s old Hydrolators) that is an attraction in itself.

The roller-coaster/simulator hybrid itself is relatively tame, falling between Flight of the Hippogriff and Revenge of the Mummy on the thrill meter, with one short-but-unusual drop and a fun finale launch. You travel through a mix of massive sculptural sets and towering 3-D screens featuring Helena Bonham Carter and Ralph Fiennes as Bellatrix and Voldemort; Daniel Radcliffe and Emma Watson had “other commitments” and were replaced with CGI and dodgy voice doubles. The visuals aren’t quite as vibrant as Transformers’, and I lament the lack of actual pyrotechnics or animatronics. But even if Gringotts isn’t quite the “best ride ever” I’d hoped for, it’s still tremendously thrilling and joins Universal’s Forbidden Journey and Spider-Man among my top five all-time favorites. With Disney down the road, three out of five ain’t bad.

Of course, the freebie-fueled fever dream of media week, with only a few hundred guests inside Diagon Alley, will be a distant memory once thousands of Potter fans descend upon the park next month. It may be fall (of 2015?) before you can even get into the area without a return time ticket and a ton of patience, but based on what I’ve experienced it will be well worth your wait.