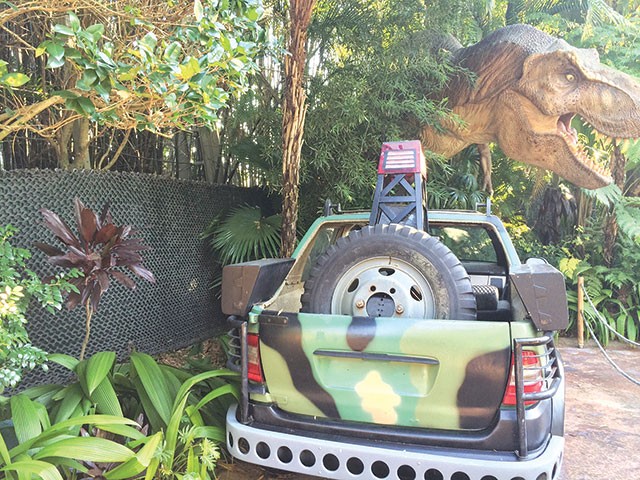 The paint is barely dry on Universal’s heavily hyped Diagon Alley, and guests are still waiting upward of four hours just to “make a deposit” on the area’s signature Gringotts bank ride (no, that isn’t as inappropriate as it sounds). But the only thing theme-park fans love more than a hot new ride is even hotter new rumors, so for this edition of Live Active Cultures I’m rounding up the latest upcoming attraction intelligence that’s been buzzing around the tourism corridor’s back alleys. As always, all of the following information is unofficial, unconfirmed and for entertainment purposes only; if a rumor persists for more than four hours, please see your physician or travel agent.

Let’s start at Universal Studios Florida, where wannabe wizards are propelling the park to its most profitable summer ever. Some armchair observers have looked at the relatively short lines to enter Diagon Alley or ride the Hogwarts Express train since opening day and inferred that Universal’s addition isn’t meeting expectations. The truth is that the surprisingly sane queues reflect not audience disinterest, but exceptional crowd control operations – unlike in 2010, when sprawling standby lines snarled Islands of Adventure’s walkways. Despite the Gringotts ride still operating significantly below its maximum capacity of 2,000-plus riders per hour, Universal’s parks are processing record numbers of guests; on many days more people board the Hogwarts Express than enter Disney’s Animal Kingdom.

Naturally, since Potter is seemingly still a license to literally print money (most guests purchasing Gringotts bank notes never spend them), don’t expect Universal to abandon the Boy Wizard any time soon. New merchandise, including love potions and talking “howlers,” should show up in Diagon Alley’s shops shortly, along with a second Tales of Beedle the Bard puppet performance. Art director Alan Gilmore has said he’d like to design a Ministry of Magic attraction, with the neighboring Fear Factor Live stadium available as an ideal expansion spot. Farther ahead, the under-development Fantastic Beasts films could find a home near Hogsmeade, on the remains of IOA’s Lost Continent.

Before any more Harry happens, however, first expect something hairy. Legendary Pictures, producers of Godzilla and the upcoming Jurassic World, surprised Comic-Con 2014 guests with a teaser for Skull Island, their 2016 reboot of King Kong. Of course, careful theme-park construction-watchers weren’t surprised, as work on Universal’s “Project 340” has been underway for many weeks in a previously unused corner of IOA’s Jurassic Park. For now, there’s little visible evidence save earth-moving equipment and the unpublicized removal of an iconic archway outside Toon Lagoon. But water management district permits and leaked preliminary blueprints reveal an ambitious indoor/outdoor ride that will merge animatronic-filled sets with a simulator finale similar to Universal Studios Hollywood’s hit King Kong 360 3-D attraction.

Elsewhere at Universal, look for USF’s KidZone and San Francisco areas to beam out, with Star Trek and Fast and Furious leading the pack of potential IPs pitched to replace them. And that’s just the tip of Universal’s expansion iceberg: Expect new entertainment in time to celebrate the resort’s 25th anniversary next year, and more hotels and a new water park before the decade is out.

The Potter pandemonium has helped hold down crowds at Walt Disney World this summer, especially at Epcot and Animal Kingdom, with Magic Kingdom attendance fairly flat despite the widely publicized debut of the Seven Dwarfs Mine Train. But Mickey isn’t one to take competition lying down, and the Mouse’s empire is striking back with the biggest hit it’s had in decades. Frozen Summer Fun, a short-run festival of hastily assembled entertainment including an ice-skating rink and evening fireworks, has proven enormously popular with fans of the frigid film phenomenon. Some park fans may scoff at the cheap giveaways (like paper Olafs on popsicle sticks) but the new sing-along celebration has the snarkiest, most smartly subversive script Disney has staged in years.

This quickie seasonal event is only the tip of the Frozen iceberg, as Norwegian news outlets are up in arms over the whispered renovation of Epcot’s Norway pavilion with an Arendelle theme. Magic Kingdom’s Anna & Elsa meet-and-greet remains so popular that Disney has reintroduced paper FastPasses to corral the queue, but will Frozen still be a hot ticket by the time any E-Ticket opens? Considering WDW’s glacial construction pace – and with Animal Kingdom’s Avatar-land and a rumored Star Wars makeover of Disney Hollywood Studios also in the pipeline – Mickey must be hoping guests don’t “Let It Go” before they manage to break ground.