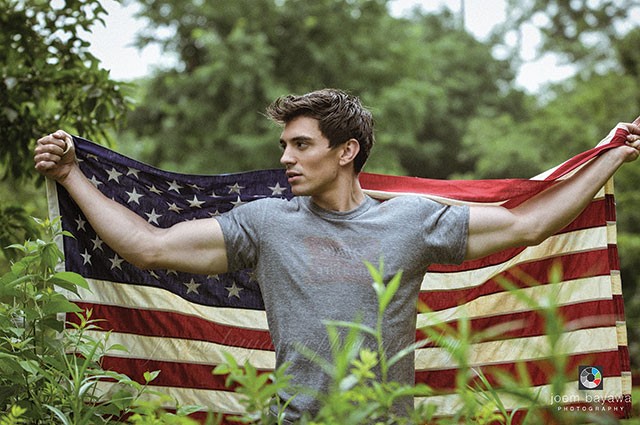 There are about five seconds of dead air just past the climax of Steve Grand’s runaway viral video hit, “All-American Boy.” But it’s arguably in those five seconds that 23-year-old Grand, now widely touted as the first male “gay country singer,” launched his musical career. If the song itself weren’t risqué (and risky) enough – it chronicles a gay-on-straight crush over rollicking saloon power chords – the video, which launched in early July garnering more than two million YouTube hits since, takes the attraction one step further: A skinny dip in the lake with his best friend and paramour that climaxes in that five-second silence and a long, non-consensual, confused kiss.

Though Grand was clearly after some notoriety, he probably didn’t expect a self-funded music video of an independently produced record to make a big enough splash to land him on CNN and Good Morning America. But that’s what happens when you throw the word “gay” into the country music cauldron. Grand doesn’t lay claim to the description, but nor does he shun it. It’s working after all.

“I don’t really care. It’s not something that bothers me one bit,” he says. “People debate about it and people get hung up on it. I just don’t. For one, I have plenty of other things to worry about. I hate to be cliché, because everyone says, ‘I don’t believe in labels.’ It’s kind of a truth. I think that we’re always eager to put things into boxes, and things don’t always fit so neatly into one box. People are like, ‘Is he country? Is he pop?’”

Grand, who hails from the Chicago area, earned his chops playing bars and releasing cover videos – including one of Lady Gaga’s “You and I” – on YouTube. Prior to that, he says, music – both the songs he was performing in the Catholic church and the more personal ones he was writing in his head – were a means of coming to terms with his identity and coming of age.

“I had an outlet for everything I was going through as an adolescent, learning about my sexuality and how to deal with it, and how all that affected my relationship with my family,” he says.

That relationship, he says, is very supportive at the moment, as is his relationship with the church he grew up in (“They were only worried about the drinking and the smoking,” he jokes). But coming out to your family and coming out on the popular cultural stage can be vastly different beasts. For Grand, the progression seems to be fueling his songwriting fire.

“Self-acceptance is not necessarily a point of arrival in life,” he says, philosophically. “It’s a continued journey, because we’re always evolving and we’re always changing. I don’t think life is supposed to be stagnant; I don’t think we’re supposed to be stagnant. So certainly, self-acceptance is a theme that comes up in my music, but other things do too. I have my share of sappy breakup songs. Coming of age is also a theme. But then there’s happy, celebratory songs where everything ends up as it should.”

Last month, Grand released his second single and video, “Stay,” in which he finally gets the guy, albeit a different one, who also happens to be very attractive. The sex-symbol tag is another one that Grand doesn’t seem too uncomfortable with. He did a stint as an underwear model, photos of which a number of gay websites were quick to dredge up.

“I’m fine with people finding me attractive,” he says. “I grew up and I had long hair and I looked weird and I would wear the same Paul McCartney concert T-shirt from my dad from 1990. I was just kind of in my own world.”

But the awkward kid is now an overnight gay sensation. With that position comes the criticism of not just homophobic heterosexuals, but also those within the LGBT ranks.

“I think that [gay people], especially generations beyond me, have this impression that ‘Oh, here’s an artist that’s selling himself as a gay artist, and I don’t like it. I don’t like what it represents.’ Well, quite frankly, I’m not seeking everyone’s approval,” he says. “There’s just as much diversity within our community as there is outside. By honoring that truth, hopefully our trailblazers that came generations before us can smile at that. It’s a mark of progress, acknowledging our own diversity.”