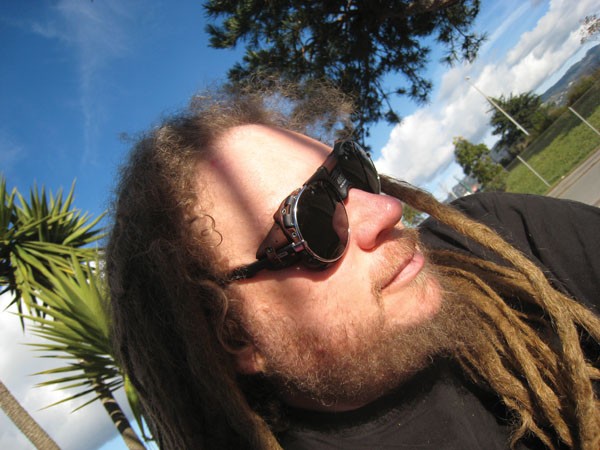 In the program notes for his Symphony for Amelia, commissioned by the Bach Festival Society in collaboration with the Winter Park Institute, writer-scientist-musician Jaron Lanier muses, almost longingly, about some of the tantalizing aspects of his inspiration’s incompletely known history.

Amelia Lanier (no relation) was the first woman published in the English language to publicly self-identify as a professional poet. In the 17th century, that was an incredible act of assertiveness. Other biographical tidbits – a comprehensive account of her life has been difficult to come by – reinforce the impression that she was a unique and forceful mind, and an unconventional spirit.

She was a mistress to a cousin of Queen Elizabeth I, an arrangement she evidently enjoyed quite a bit more than she did her later marriage. Her volume of poetry, Salve Deus Rex Judaeorum, published in 1611, contains poems dedicated almost exclusively to women and is regarded by some modern critics as a kind of “proto-feminist” work. One musical scholar suggests that Lanier provided the texts for composer William Byrd’s Songs of Sundrie Natures, which was dedicated to her aristocratic lover. Some speculate that she is the Dark Lady evoked in Shakespeare’s sonnets; it has been further theorized that she, in fact, wrote at least one of the plays credited to the bard.

Though that last claim is pretty dubious, it is clear that Amelia Lanier was a remarkable woman and bold artist. So it’s easy to grasp Jaron Lanier’s interest in her; it’s also easy to imagine him sounding almost pained when he writes of the blackouts in our knowledge about her and her contemporaries: “It just isn’t fair that we have no record of contact between Shakespeare and Byrd,” he writes. “But it seems that Amelia knew them both. What went on? The imagination burns.”

It’s an aptly poetic turn of phrase – the imagination burns – and one suited to the man Time magazine named to its 2010 list of the 100 most influential people in the world, alongside others with whom you may be more familiar: Steve Jobs, Sonia Sotomayor and Lady Gaga, for example.

In fairness to Lanier we should pause, here, and point out that he isn’t grouped with fellow musician Lady Gaga, but with “thinkers” like Jobs and Sotomayor. In fairness to Lady Gaga, we should pause and point out that it’s not a classical versus pop music distinction, or high versus low culture snobbery that’s keeping her off the ostensibly brainier list. It’s that Lanier, in addition to being a talented musician and composer, is one of the early and visionary Silicon Valley players, whose work in computer science shaped the global digital environment in which we now live – a unique and forceful mind, and an unconventional spirit, in his own right.

Lanier is best known – at least, within certain geeky circles – as the man who coined (or at least popularized) the phrase “virtual reality.” The story goes that after an impoverished and bohemian youth spent in New Mexico, and an aborted or failed attempt at art school, Lanier followed a girl to California and tried his luck as a musician.

His talent for advanced mathematics and his interest in testing the boundaries of computer-programming languages, however, proved a more immediately lucrative avenue, and he found himself working on video games for Atari. One of the games that he designed – Moondust, which has been described as the first ever “art game” – was popular and profitable enough that it allowed Lanier and partners to start their own company, VPL Research. The company was dedicated to developing a programming language that moved beyond the arbitrarily symbolic toward a type of visual language. The very name of the company – VPL stood for “Visual Programming Language” – hinted at this. Lanier and his colleagues wanted to enable the physical manipulation of objects in three-dimensional space. That is, he aimed to enable the manipulation of a computer- generated object in a real space or a real object in a computer-generated space – and various blends, thereof. Virtual reality.

If this sounds confusing, it is. Language is like that. But if you are a gamer or the owner of a Wii Fit, you get it. You spend time in a space that Lanier helped build for you.

VPL was quite successful, and Lanier was regarded as a near-messianic figure, espousing the benefits of a not-yet-Matrix-like computer-facilitated alternate reality. He could have been a Gates or a Jobs, perhaps. But VPL proved more exciting than stable, and the company and its patents were taken over by another company, ultimately becoming part of Sun Microsystems. Lanier has since racked up so many scholarly and professional titles that it’s boggling: visiting artist, chief scientist, scholar at large, innovator in residence.

His latest book, You Are Not a Gadget, in which he offers a sharp critique of much of Web 2.0 culture as a kind of anti-human, anti-individual “hive-mind” engine, has been well-reviewed and well-received, even by those it seems to challenge most directly. It’s the kind of activity that keeps phone interviews very brief – and gets you on Time’s list of innovative people.

But throughout the academic placements and the corporate consultantships, there has been Lanier’s music. Lanier, who plays piano and also specializes in wind and string instruments of Asia, has been loosely considered a “new classical” artist since the late ’70s. In that time he has worked with an array of artists: Yoko Ono, Philip Glass, George Clinton, Duncan Sheik, Vernon Reid, Terry Riley and Stanley Jordan, for instance. In the Bach Festival Choir and Orchestra, under the direction of John Sinclair, Lanier says he has found collaborators worthy of that company.

“This is an unusual piece,” he says. “It demands a world-class orchestra – one that is also courageous. I’ve worked with a lot of orchestras, nationally and internationally. And this is just an amazing orchestra. It might have been kinder to the choir to be less experimental, but this has been a marvelous collaboration.”

Artistic director and conductor John Sinclair concurs. “It is an unusual piece,” he says. “At every level it’s challenging. Ordinarily, the orchestra accompanies the choir; in this case, the choir is almost accompanying the orchestra, becoming part of the rhythmic pulse and fabric of the orchestra.”

Lanier’s commission will be paired with Beethoven’s Symphony No. 9 and works by Rollins College community composers including professor Dan Crozier (of whom Sinclair says, “He’s local, but his talent is not. He’s a big, big talent”).

“In Beethoven’s day,” Sinclair says, “the ninth was cutting edge. It was the first to use the choir as part of the symphonic texture. As Beethoven was revolutionary in his day, Jaron is in his. I’ve never heard a choir used like this before. But that’s why we asked him to do this. The one thing you know when you’re working with Jaron is that you’re working with one of the most brilliant minds  of the time.”

How would the 17th-century Lanier respond to the use of her text in the musical context provided by this latterday Lanier? Although they are kindred spirits in their “bravado and futurism,” Jaron Lanier says, he concludes that she might be startled.

“My setting of Amelia’s words is aggressively modern, and would probably sound strange to her,” he writes in the program notes. “I was thinking of the mercurial trajectory linking Amelia to me, with its ambiguities of descent, unpredictable musical diversions, great migrations and unwitting reunions across centuries – and this is the music that came out.”