How much would you pay for a poster advertising a recent rock show? Not an original Hendrix at Fillmore screen print, but a poster for, say, a Red Hot Chili Peppers, Wilco or Mudhoney show? Ten bucks? Twenty? Think again. A new era of rock poster appreciation has arrived, and with it, an entirely bizarre sense of economics.

"`The poster I did for` the Supergrass show at The Social was the first silkscreen I did … we `made` 150 of 'em," says local artist Greg Reinel, who signs his prints "Stainboy" and got his start doing black-and-white flyers at late-night Kinko's runs. "That one's going for $450 on the collectors' market now."

Although not all artists are able to fetch that kind of money for their posters – nor do most of Reinel's other prints approach that price range – it's clear that a renaissance in gig poster art is underway, driven both by the "collectors' market" and a more widespread appreciation of the form. Vintage posters by Frank Kozik (the Texas artist who is largely credited with reinvigorating the form in the mid-'80s with intensely psychedelic posters for the likes of Sonic Youth) routinely fetch more than $500, and other genre icons like Coop and Lindsey Kuhn (both of whom expanded the form's visual palette via bright and demonically playful images) come close to those numbers.

However, it's not just the deep pockets of art collectors that are responsible; with graphic design software becoming more accessible and easier to manipulate – as well as the ease with which artists can make their material available on the Internet – technology has empowered scores of disparate poster artists across the country to make and market their work, resulting in a broad, diverse and vibrant art scene.

"Before the Internet, there was only a handful of artists who were known and who got collected," says Thomas Scott, an Orlando graphic designer who designs rock posters under the nom de guerre of Eye Noise. "In the last three years especially, there's an audience out there who knows about these posters and different artists."

"We've just really – over the past three years or so – been able to figure out how to make money on it," agrees Jeff Matz, a gig-poster artist and co-owner of Lure Design. "You don't make a lot of money, but now that there's a market out there buying these posters, it's usually enough to just break even."

Although Reinel is able to eke out a living as a full-time poster artist (he dissolved his long-running garage-rock band Nutrajet to focus solely on being an artist), he says that he's "not getting rich off of it, but it definitely beats working at Wal-Mart." Both Scott and Matz readily admit that the money they make from making posters is usually just enough to justify the expense and work that goes into them. Although they both have good jobs in graphic design – Lure deals with a number of corporate clients and Scott's day job is as principal designer at the Disney Design Group – the work they do on posters allows them a more extroverted form of expression.

Needless to say, the severed head that adorns one of Scott's posters for a Bloodthirsty Lovers show wouldn't go over too well with the folks at Disney, nor would it be likely that an arts organization looking for fund-raising materials would have much use for the hypodermic needle/headphone jack image Matz created for a 1999 Morphine poster.

"It's all about doing exactly what I want to do within a graphic design format, because I'm not a fine artist," says Scott. "I understand graphic design, so with posters, it's the whole graphic design process without a lot of the pain that goes with it. You don't have to deal with a lot of the client-approval aspect – in some cases you do, but it's not so heavy on that – because the money is so small. It's more about allowing the artist to do their thing." 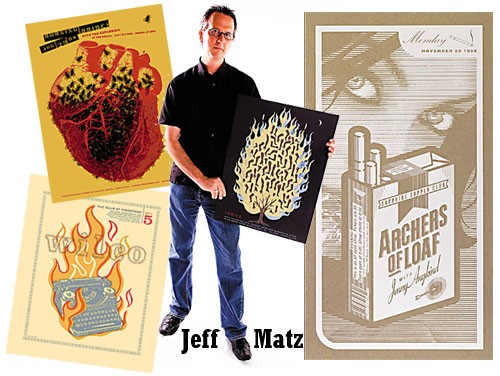 "At the design studio," says Matz, "we have a lot of corporate clients, but we do have some clients who allow us to be creative. But for the posters, it's the same thing that Thomas was saying. It's one place where we can have more creative control over what we do."

Designing gig posters presents an odd dilemma for the artists; on one hand, a big part of what makes a good poster is the opportunity for adventurous, creative expression and the ability to put a unique and individual twist on what, for a while, looked to be a dying art form. On the other hand, the raison d'etre for a rock-show poster is to actually get people to go to the show.

"The whole point of 'em is to get your attention," says Reinel. "Good design is important, but the idea is to get people's attention and to get asses in the door."

Reinel's posters don't have any trouble getting people's attention. Provocative and playful, they employ superbright colors, and Reinel tends toward images that are as sexual as they are aggressive. Very much in line with the Kozik/Coop/Kuhn school of exploding adolescent rock & roll images (chicks, bikes, Satan, chicks) in a fluorescent spray of semi-ironic homage, his posters are nothing if not in-your-face. Matz is a little less confrontational, depending heavily on type treatments and relatively abstract design features. Scott splits the difference, utilizing gaudy sci-fi images and other quirky, splashy visuals that pop off the page.

"Usually you're looking for some sort of reference – whether it's a lyric or a song title – that you can turn into a visual," says Matz of his creative process. "Sometimes they are less direct, just sort of what a band looks or feels like. A lot of poster-makers use posters as a way of personal expression; I don't really do that so much. It's not our place to put our political beliefs or whatever into a poster. We try to make it work for the bands and we try to make it work for the fans."

These days the "fans" buying the posters are likely to be bigger fans of the designers than they are of the bands featured on the posters.

"I've got a lot of posters hanging up around my house, and for a lot of them, I could care less about the band. I just really like the art," says Reinel. "I do think a lot of the people `who are buying these posters` are art fans who didn't even know this form of art even existed."

Thanks to the publication of Art of Modern Rock last year, more and more respect is being paid to both the art form and the artists responsible. The book was a lavishly printed compendium of 1,800 modern rock posters, including works by Reinel, Scott, Matz and nearly 375 other artists, and it acted as the "sequel" to Paul Grushkin's seminal 1989 book The Art of Rock. However, unlike the earlier book, Modern Rock wasn't focused on a bygone era of greatness; instead it focused on the equal and often superior works being created for today's underground (and above-ground) rock bands.

As testament to the reinvigorated interest in modern gig posters, there was a recent Art of Modern Rock exposition at the Rock & Roll Hall of Fame in Cleveland, followed by other, regional events like the one this week at House of Blues. For this particular exhibit, Reinel (who helped organize it), Scott and Matz will all be featured, as well as non-local artists and studios like Dave Glass, Mike Martin (EngineHouse 13), Jeral Tidwell, Firehouse and others.

"`The event here` kinda started with House of Blues saying they wanted to do an exhibition of some of the `posters` I've been doing for them," says Reinel. "But that's a big place, and no matter how much I bring in, I'd be kinda dwarfed in there, so I said, 'Why don't we bring in Thomas and Jeff and some of these other artists.' We're putting together some more shows in the southeast. Nothing like this has ever happened here."

With the renewed interest and appreciation of the form, this probably won't be the last time something like this happens here.