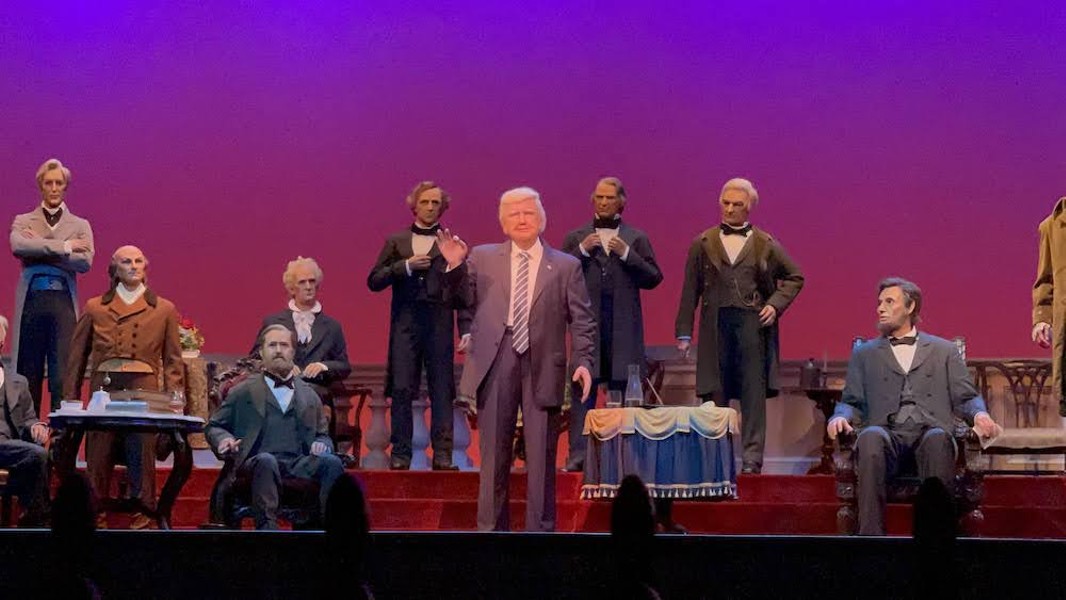 Only two weeks ago, I was sharing optimistic news about upcoming additions to Orlando's attractions. Well, the theme park gods giveth, and the theme park gods taketh away. Here's the latest scoop on some recently announced alterations, interruptions and outright extinctions at the Walt Disney World Resort.

An iconic opening-day Magic Kingdom attraction shut down last week without any official advance notice, but unlike most Disney park closures, this one elicited more applause than anger. Jan. 19, the final full day of the Trump administration, also turned out to be guests' last chance to see the current version of the Hall of Presidents. I attended one of the final performances, and am happy to report that the security guards and spiked railing added four years ago for the Trumptronic's safety weren't required, as the audience remained respectful, although I'll admit watching the red curtain come down on Donald's doughy doppelgänger for the final time was strangely satisfying.

Even as late as that afternoon, Disney cast members in Liberty Square couldn't say what would become of the attraction, but it came as little shock when Inauguration Day dawned to find a "closed for refurbishment" sign on the Hall's entrance.

Some — including the Orlando Sentinel's editorial board — have called for it to be permanently retired, but Disney has announced that the show will eventually reopen with an audio-animatronic figure of the new President, although it has not set a reopening date, nor confirmed whether the Biden-bot will have a featured speaking role in the finale like all its predecessors since Bill Clinton.

In light of October's 50th anniversary, it might be wise to sidestep polarized contemporary politics and restore a tribute to the 1971 version of the attraction, with the chief executives silently nodding along to a roll call.

At the other end of the spectrum, internet rumors claim the Muppets – who previously performed outside the Hall of Presidents – will move inside the theater, with Weird Al Yankovic and Lin-Manuel Miranda floated as collaborators. As wild as that idea might seem, even a park purist like myself would prefer that to the divisive downer that Walt's pet project devolved into.

Any complaints about the Hall of Presidents' closure were easily drowned out by the hue and cry over Walt Disney World's announcement earlier this month that the complimentary Magical Express bus service between Orlando International Airport and their on-site hotels would cease operations at the end of 2021. That means there will be a gap of at least a year between the end of the Magical Express and the debut of the Brightline train line to Disney Springs, leaving visitors to secure alternate transportation.

Originally intended to trap vacationers without rental cars on Mickey's property, the "free" service was always factored into the resort's expensive nightly room rates (which are not expected to decrease with the bus elimination). But Disney has apparently decided that, with increasing numbers of guests using ride-hailing apps to escape to Universal and SeaWorld, it's no longer worth their while to subsidize the Mears-operated service.

Although most locals likely never used the Magical Express service, tourists have come to rely on it over the past 15 years; its absence will be especially felt by families requiring a vehicle with multiple car seats, which are nearly impossible to come by otherwise.

Also almost overlooked amid the Magical Express mourning was news that Extra Magic Hours, which allowed pre-pandemic resort guests into select parks one or more hours before or after normal operating hours, were being permanently eliminated. In their stead, Disney is instituting 30 minutes of Early Theme Park Entry at all four parks every morning, with no evening hours.

This new scheme somehow manages to make things worse for both those paying to stay on-site — whose time to enjoy shorter waits has been chopped in half — and off-site visitors (including locals), who will now never be able to rope-drop a park without finding the headliners' queues already filled with hotel guests.

Last but not least, a recent announcement sounds like a ray of sunlight for long-furloughed entertainers, but could signal a slow recovery for Disney's stages. Festival of the Lion King, Animal Kingdom's most popular live show, will be the first large-cast Actors' Equity show to reopen, but there are a couple of catches. Simba and company won't return until sometime this summer, and when they do it will be in a "Celebration of" the usual show, featuring modified choreography and backstage adjustments to provide physical distancing for the cast, crew and audience.

What isn't currently clear is how many of the 700-plus union performers who are still laid off will be brought back, and when any other shows might be revived. Disney's Hollywood Studios is already home to two of the resort's reopened Equity venues (Savi's lightsaber workshop and the Frozen sing-along), so restarting open-air amphitheater productions like Indiana Jones Epic Stunt Spectacular and Beauty and the Beast seems like a no-brainer. I'm never excited about Disney making cutbacks, but I can accept it if some of that cash ends up in the paychecks of unemployed actors.