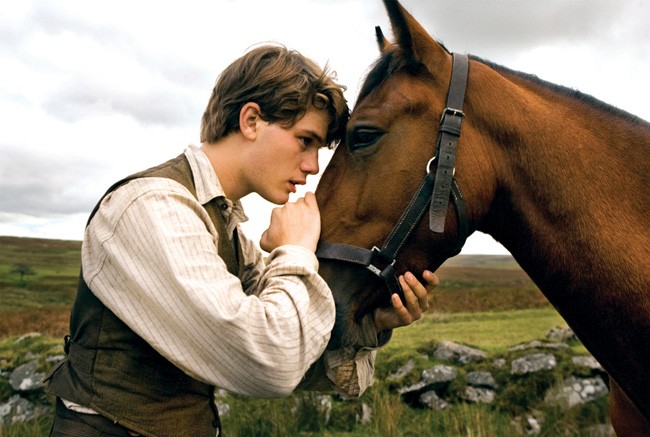 Here’s a fun drinking game, kids: Watch a Steven Spielberg movie, and take a shot every time the camera dollies slowly into a close-up of a character gazing at something awe-inspiring. You’ll be soused by the end of the first reel of War Horse, a flagrant showcase for the signature cliché of Spielberg’s “invisible” direction.

Old habits die hard; while his movie-brat comrade Scorsese is out reinventing wheels and making the best 3-D film ever conceived, Spielberg is content to repeat his old tricks – not limited to the customary John Williams score obtruding at every emotional peak and valley. War Horse is a fine example of a director, his conductor, his cinematographer and his actors working in handsome, elegant synchronization to play us all like dime-store harmonicas.

Spielberg’s theme this time is “horse conquers all.”

The central character is Joey, a thoroughbred purchased at auction by an English farmer at the dawn of WWI. He’s hoping this unimposing equine will be the plow horse that saves his land, though only his son, Albert (Jeremy Irvine), has enough faith in the animal to foster its growth. He remains cosmically linked to the horse, even when it is requisitioned by British forces and sent into battle. We continue to follow Joey across Europe as he changes owners (some friendlier than others) while leaving a lasting legacy to whomever he comes across.

The hair-pulling implausibility of the script, by Lee Hall and Richard Curtis from Michael Morpurgo’s novel, is made leaden by dialogue that sounds rote and expository – full of function but free of personality. We know Spielberg can direct the hell of out a battlefield scene, and it isn’t until these visual and aural crescendos that he finds his most captivating stride. From the frightened soldier whose hands are shaking so much that he can barely pull the pin on his grenade to the rats that immediately congregate on the fresh corpses, the war scenes have a gritty authenticity that would make Samuel Fuller proud. It’s just frustrating that these raw, harrowing details give way to some of the year’s most shamefully pandering moments of sentimental hokum, calculated against all logic to prompt eruptions of audience applause.

Oddly enough, the primary precedent of this underdog-horse-goes-to-war movie is not Secretariat or Saving Private Ryan, even if its plot suggests an amalgam of the two. No, the biggest influence appears to be Robert Bresson’s Au Hasard Balthazar. Joey is like the titular donkey in that 1966 masterpiece, diligently observed as he changes owners and impacts their lives. The comparison is never more apt than in an extended close-up of Joey’s hooves trudging through a muddy landscape, buckling under the weight of the world; it’s filmed exactly the way Bresson used to anatomically isolate his character’s suffering. If it accomplishes anything, War Horse succeeds at making Joey’s struggle our own and humanizing what 99 percent of war films before it have viewed as an expendable mode of transportation.