From Santorum to Scientology, the '90s saw it coming 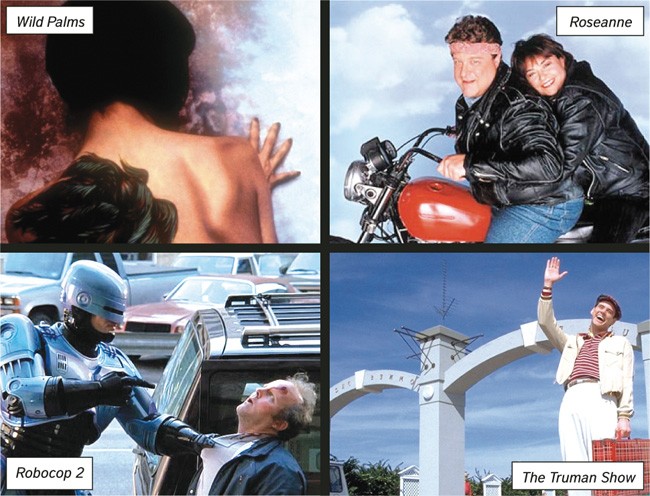 Who could have foreseen two decades ago that life in the 21st century would be so complicated? Well, you could have, dummy, had you spent all of your time devouring movies and TV like your friends begged you to. Here's all the artful precognition you missed while you were wasting your time at the model U.N.

Robocop 2 (1990): The underrated Robocop sequel has some questionable elements, like a craven black mayor who throws down with a drug lord for political purposes. But it's A-one correct in depicting such threats as secondary to those posed by the Omni Consumer Products corporation, which plays all sides of Detroit law enforcement against each other in its quest for power. The movie isn't just a harbinger of today's prisons-for-profit abuses, but of the privatization drive that's polluted national defense (and has its sights set on Medicare and Social Security). Comics giant Frank Miller wasn't happy with the way in which his first screenplay was tweaked for the screen; still, this remains the only one of the three Robocop movies that's cautionary and creatively successful in equal measure.

Wild Palms (1993): The TV miniseries adapted from Bruce Wagner's Details magazine cartoon was one of the most sophisticated and forward-looking bits of sci-fi ever aired. Its portrayal of the near future encompassed everything from at-home 3-D to the U.S. government faking a terrorist attack in order to roll back civil liberties. (When the show aired, less than a year into the first Clinton administration, most 9-11 truthers didn't yet own their first binky.) But any viewer outside of the greater Los Angeles area would have been confused by its charismatic antagonist, a hack science-fiction writer (Robert Loggia) turned leader of a dangerous religious cult. This, of course, was years before Tom Cruise had helped to make Scientology a cause for national concern. Wagner's Synthiotics likewise depends on abduction and violence to further its insidious political aims – there's just no South Park to stop it.

Roseanne (1988-1997): Hey, remember when TV viewers were riveted by the story of white-trash parents who couldn't control the libidos of their offspring yet managed to escape the collapse of the American middle class by implausibly winning the lottery? Sure you do: It's on right now, under the name Game Change.

The Handmaid's Tale (1990): Let's be polite and say that this filmed adaptation of Margaret Atwood's Booker Prize-nominated novel is “less respected” than its source material. But even a hand-me-down Handmaid gets prescience points for depicting an America in which female sexuality is harnessed for the procreative purposes of a bunch of misogynist theocrats. Atwood's concept was birthed in the era of Ed Meese, but any impulse to dismiss it as hysterical exaggeration has to be discarded at a time when reproductive rights are falling like dominoes. Rick Santorum considers this a feel-good movie.

The Truman Show (1998): In introducing us to a man (Jim Carrey) whose entire life took place on TV, director Peter Weir and writer Andrew Niccol erred only in assuming the stunt would have to be pulled off against his knowledge. Little did they realize that just a few years hence, the reality-programming phenomenon would have Americans crawling all over each other to receive their 15 minutes of shame. Ron Howard's subsequent EdTV got that detail right, but is nonetheless mostly remembered as proof that every hit reality show breeds a crappy knockoff. If you wanna win points for seeing the future, you gotta get there first.