Seek out these online goodies ASAP 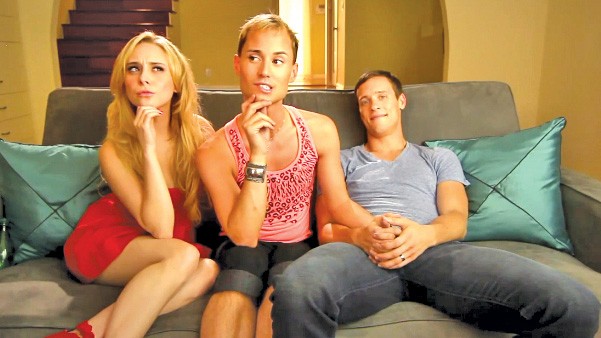 Hollywood took the week off – at least, unless you count New Year’s Eve and The Sitter, two films the studios are (or should be) trying desperately to keep critics from seeing – to, you know, accept awards and push for bigger awards. While they’re busy, however, there are plenty of hidden screen gems waiting for you to discover online. Here are just a few that I’ve fallen for recently.

Our Footloose Remake comes courtesy of the guys that brought us beloved and inspired web nuggets like Yacht Rock and IKEA Heights. It’s a crowd-sourced masterpiece in which a handful of ’Net-friendly filmmakers divided up the entire (original) Footloose film, scene-by-scene, and remade the whole thing their way. It’s a bizarre formula for meta-commentary, tons of bad dancing and wigs, animation and tongue-in-cheek hilarity. It can be seen for free at thefootlooseremake.com.

Husbands is a sharply written comedy from the mind of Jane Espenson (Buffy the Vampire Slayer, Game of Thrones) about an out gay athlete and his flamboyant actor boyfriend who get plastered one night in Vegas, wake up married (it’s legal in the series, not yet in reality there) and worry about the effect of their actions on “the cause.” Featuring guest stars like Nathan Fillion and vlogger Michael Buckley, Husbands can be heartwarming, politically wry and head-scratching, all in the span of about a minute-and-a-half. (Bemoans Brady the ballplayer the next morning: “I look like someone who’s had work done to look like me.”) Go to husbandstheseries.com to check it out.

Finally, last week, the Internet finally stumbled upon a piece of ’80s film gold when director John Avildsen’s (Rocky) YouTube channel was found to include Avildsen’s own original handheld VHS rehearsal footage of The Karate Kid. Not only that, but Avildsen has gone through the trouble of splicing it all together into one film – The Karate Kid: Alternate Rehearsal Edition, one might call it. From Miyagi’s stunt double reigning blows on the Cobra Kai to Ralph Macchio and Elisabeth Shue practicing furtive glances on the beach, it’s one of the most exhilarating, often embarrassing and totally voyeuristic experiences someone of my generation could possibly have online. Just search YouTube for “Karate Kid rehearsal.”

One more thing to look for online: OW’s film blog, For Reels, will be rolling out our 12 Days of Christmas holiday-movie marathon with essays by contributors on underappreciated Christmas films starting Dec. 12.