In regard to the sheer number of films screened, the Orlando Film Festival is the biggest film fest in town. Taking over downtown's Cobb Plaza theater for more than a week, the festival offers more than 200 shorts and features, along with panels and workshops covering all aspects of filmmaking. The celebration doesn't stop after the screenings, though; nightly afterparties are one of the big draws for those looking to rub elbows and network.

Creative City Project's Immerse 2019 will be a weekend of saying "Art!" and "Art?" The website promises that the event will "help you live the exciting life you deserve." Who doesn't want that? The event will have large-scale interactive installations from the World of Corkcicle and Architect of Air's luminaria, which is self-described as a cross between a "womb and a cathedral." You can explore winding paths and domes filled with colored light. High-flying performers and more than a hundred actors, musicians, artists and other creatives will entertain all weekend. Pro tip: Look out for small pop-up venues to really personalize your experience.

"Last Podcast on the Left"

Live recordings of popular podcasts are filling up rock venues just as quickly as your favorite bands, and "Last Podcast on the Left" 's "Back in the Habit" tour, courtesy of core trio Ben Kissel, Marcus Parks and Henry Zebrowski, is no exception. "Last Podcast" tackles grim and ghostly subject matter both real-world and fantasy – serial killers, UFOs, supernatural phenomena and more. The trio are hardened road dogs, so rest assured this won't be some snoozy mumblefest. The timing of their Orlando stop is spookily seasonal.

Way before Lin-Manuel Miranda took over Broadway with Hamilton, the venerable "Les Miz" was the biggest musical about a revolution that theater-goers had on the menu. This touring production is based on the Tony-nominated 2014 Broadway revival that freshened up the window-dressing while keeping the giant rotating barricade intact. Do you hear the people sing?

One of the largest and longest-running vegetarian and vegan festivals in the world, the Central Florida Veg Fest returns to Festival Park this fall. The family-friendly festival offers up dozens of cruelty-free bites alongside a full slate of activities, including informative panels, cooking demonstrations, animal rescue groups, live music and, of course, a drum circle. And don't worry: No one's going to yell at you if you're not a vegan.

Enzian screens a live taping of Phoebe Waller-Bridge's one-woman stage show, the source material for her massive TV hit. The popularity of Fleabag is almost impossible to articulate – sex addict runs slowly failing guinea-pig-themed café while letting down/being let down by her family? – yet it seems to be universal, evidenced as much by Waller-Bridge's recent Emmy win as by the torrent of social media adulation. The appeal of #HotPriest and #FleabagJumpsuit are obvious, but it says something fucking wonderful about TV-watching humanity that the lot of us were mesmerized, moonstruck, by this spikily mirthful story of grief and self-destruction.

The reason your grandmother keeps inviting you over to "have a kiki" brings its live tour to the Bob Carr this fall. Season 10 fave Asia O'Hara leads a cast that includes Season 11 winner Yvie Oddly along with Aquaria, Detox, Plastique and more, in an extravaganza of drag performances and dance. What the hell, bring your grandma.

How will EDC Orlando up its game this year? Well, for the premier EDM and dance music festival in our own downtown, the answer is always excess. The fest balloons to a massive three days packed full of artists like Deadmau5, Rezz, Steve Aoki, Allison Wonderland, MSTRKRFT and Nora En Pure. Along with more time and more acts, there will also be 20 more acres overtaken by this dance wonderland, which means more stages, more installations and of course all of the varied extra-musical distractions. 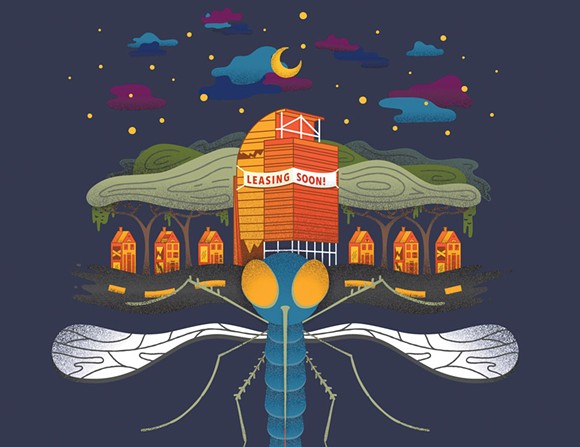 Nathan Holic's "Great Orlando novel" uses text, comic panels, watercolor illustrations and Eggersian footnoting to tell the tale of a hapless house-flipper caught in the mortgage crisis of 2009. The release party may be less structurally twisty, but promises to be just as Orlando-centric – will there be appearances by Mandy Moore and Scott Stapp? Will the catering consist of Joey Fatone's "Fat Ones" hot dog truck and Orange Blossom Pilsners? You'll have to show up to find out.