What new I-Drive escape room the Bureau lacks in lucky timing, they make up for with creativity and ambition

Many people have reached peak cabin fever and, despite Florida's continually climbing coronavirus case loads, are desperately seeing diversions outside their own overly familiar four walls. Are you eager for cutting-edge interactive amusement, but the idea of attending a theme park (even with all their safety precautions) is still too overwhelming? It may seem counterintuitive to leave your house only to get locked in again, but an escape room like the Bureau (5400 International Drive, thebureauorlando.com), which debuted earlier this year, might be just the sanitary entertainment you're seeking.

Opening an intimate, hands-on indoor attraction in the middle of a global pandemic is about as far from ideal circumstances as one can imagine. But what the Bureau lacks in lucky timing, they're trying to compensate for with creativity and ambition, as I learned from co-founder and CEO Alexis Santos last Friday.

"It's hard," acknowledged Santos, who attended New College of Florida and covered technology for Creative Loafing and Engadget along his "long, winding road" to consulting on interactive experiences, including Orlando's "Beast of Blackwood" outdoor haunt in 2017. "We wound up getting just enough funding to put this place together. We got the building last June, and we essentially got our permits greenlighted in mid-November. We opened with our first game in mid to late February, [then] we closed, so we were open for like three, four weeks."

The Bureau used the downtime to add a second adventure to their venue, then reopened in late May with new safety protocols "based on CDC recommendations and government recommendations and guidance." Rooms hold a maximum of eight players (with a two-person minimum) and guests are no longer paired up with strangers, so you're guaranteed a private game. Although players may remove their mandatory face masks once locked in, the space is left vacant for at least 30 minutes after each party. "We're using a food-grade sanitizing solution," Santos said, describing their cleaning routine between each customer. "Anything that is going to be high-touch, like the pipes, all the handles, anything you might reach your hand in or get near, even screens – we wipe everything down." 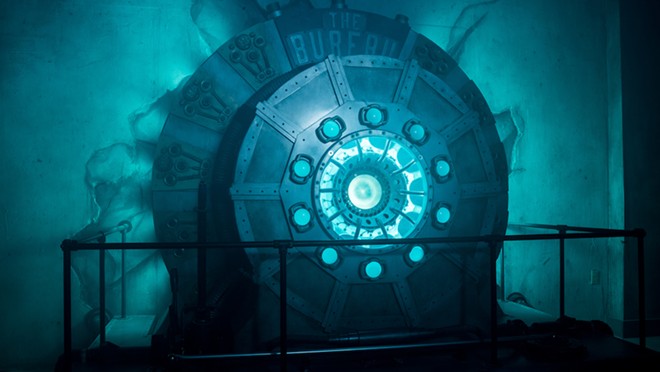 If nothing else, the Bureau was certainly the most impressively socially distanced attraction I've visited. Simply spotting the nondescript building's entrance was a bit of a challenge (hint: Look for the big B), and I was initially baffled by the employee-free antechamber, which resembles a 1970s travel agency, complete with a vintage vending machine and an ancient Disney advertisement. Soon a message flickered to life on a black-and-white TV, directing us to use an intercom and enter a pitch-black room, where another video, featuring local actor Steve Hurst as the Bureau's Howard Stark-style Director, welcomed us onto a team of dimension-hopping do-gooders.

Once through that cinematic initiation, we were greeted by a masked host in the facility's large retro-industrial lobby, which is dominated by a throbbing "cosmo-multiverse transducer" that would look right at home in Dr. Who's rec room. He handed us our digital assistant, a brick-like box with an embedded smartphone screen that provides contact-free clues upon request, and a final video briefly explained the objective before our hour of isolated fun started.

I was invited to try both of the Bureau's current offerings, and each met or exceeded any of their local competitors for cleverness, craftsmanship and sheer production values. The first game, which finds you in a laboratory hatching the Loch Ness Monster's egg, requires teams to split up while still working cooperatively and uses video projection mapping to satisfyingly pay off its story. The newer Dr. Braingood scenario is even better, thanks to a groovy Austin Powers-esque aesthetic, a hilariously campy on-screen performance by The Animatronicans' Josh Siniscalco as your neurotic nemesis, and out-of-the-box puzzles involving floating brains and frickin' laser beams. We finished each with about 10 minutes to spare, requiring just a handful of hints (which appeared obvious in retrospect) and only encountering a few minor frustrations with the mostly seamless technology. 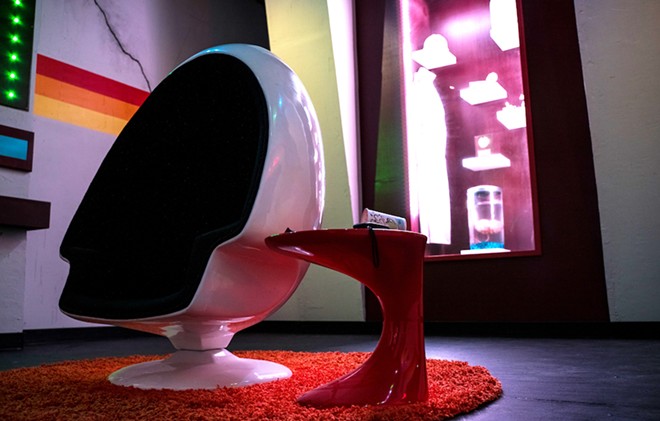 "We don't want any busywork, we want everything to make sense in context [and] as much as possible to be light-hearted ... because a lot of places are self-serious," Santos says, explaining the Bureau is more an "adventure game" than a typical "escape room." In fact, he says, "We don't think that an escape room needs to be about escaping."

The Bureau's extensive automated effects systems were designed by Santos, a self-taught programmer, but he and co-founder Alan Scammell built the place with help from veteran artists from major local attractions, some of whom must remain anonymous.

Although their attendance after reopening was initially encouraging, "we're not sure if this is causation or just correlation, but as numbers started to rise, our attendance started to dip," says Santos, observing that July's numbers lagged behind June. "We're fighting a double battle here; we're trying to make a name for ourselves and let people know that we exist."

Ultimately, Santos says their goal is to give guests "whatever we can to have some sort of sense of wonder; like, 'Even if just the smallest grain of is this real, let me just indulge myself in an alternate reality for a minute.' Because I think we need that nowadays." I know I do, and during the time I was quarantined in the Bureau, I barely thought about COVID-19 at all. And if you still can't bear to leave your bedroom, look for live remote games launching this month on thebureauorlando.com.