When the going gets weird â?¦

Both have given their time, talents, energy and money to liberal and progressive causes going back over 20 years. Both have lamented the plight of people left behind in America's mad rush of consumerism and global hegemony. Both have sung out against racism, homophobia and the careless use of economic and political power, yet somehow there are conservatives in America who think the music of Bruce Springsteen and John Mellencamp represents their ideals.

Both artists are headlining separate segments of the historic Vote for Change Tour. The tour (which is really a handful of different tours) is putting the likes of Bonnie Raitt, Dave Matthews Band, Dixie Chicks, Jurassic 5 and many others on minitours through swing states, with a finale concert in Washington, D.C., on Oct. 11 that will feature all the artists. Vote for Change is being put on by the explicitly anti-Bush/pro-Kerry organization MoveOn PAC as a fund-raiser for the explicitly anti-Bush/pro-Kerry organization America Coming Together. In other words, this isn't your average, noncommittal "get out the vote" effort; by playing these dates, there's no doubt which side of the fence the performers are on.

But until the current presidential election (when Mellencamp openly supported Gen. Wesley Clarke and later performed at John Kerry fund-raisers and at the Democratic National Convention), neither had endorsed a candidate, stumped for a political party or spoken out on issues not directly addressed in their concerts or in their music. And whether this tour succeeds or not in its goal of booting George Bush out of office for an unjust war, abuse of the Constitution, erosion of corporate and environmental regulations and a host of other sins, both Springsteen and Mellencamp will have crossed an important divide.

No longer will their music be hijacked by the right, but at the same time, no longer will they be able to remain disengaged from partisan politics. Still, many conservative talking heads and more than a few fans have seen their jumping into the anti-Bush camp as a betrayal, as strange as that may seem.

To put it plainly, any listener who invests even a few moments of thought regarding the greater message in either Springsteen's or Mellencamp's music and public lives could not come away with anything other than the assessment that they are of the left when it comes to issues of labor, the environment, economics, social welfare and civil rights. Still, right-wing politicians and their operatives have many times tried to claim both artists as their own.

When John Kerry entered the Democratic Convention to the triumphant strains of Springsteen's "No Surrender," it was easy to get caught up in the image of the moment and make genuine connections between Springsteen and Kerry. But George Bush's campaign blasting Mellencamp's "R.O.C.K. in the U.S.A." at campaign stops seems downright funny to anyone who tries to solve the equation of how an anthem about rock & roll's populist roots can become the theme of a neo-conservative.

So when Gov. Tim Pawlenty, R-Minn., recently announced his dismay over Springsteen's involvement in the tour, saying he loved his music but just wished he didn't inject it with his politics, it was difficult to take him seriously. Just how long and how closely had Pawlenty been listening? Certainly not since 1978.

It was at about that time that Springsteen began considering his music in a greater social context, as more than grand romantic dramas and highway lore. The music contained on Darkness on the Edge of Town (1978), The River (1980) and the stark Nebraska (1982) signaled this change by increasing degrees. As a writer and observer, Springsteen began to realize that the forces holding everyday people down were not always the result of their own actions or shortcomings, that the men who "walk through these gates with death in their eyes" ("Factory"), those who have "debts no honest man can pay" ("Johnny 99"), or the wide-eyed child who swears that when he grows up "I ain't ever gonna ride in no used car again" ("Used Cars") haven't always created their own fates.

At the same time, he began to make public statements about the context of the music he was making. He played a legendary set at the No Nukes concerts in 1979, and the next year he turned a series of high-profile concerts in Los Angeles into a benefit for the fledgling Vietnam Veterans of America, essentially giving the organization the money it needed to get off the ground. Later, the success of Born in the U.S.A. (1984) made him a household name, but even then his message of community, hope, faith and an unfailing work ethic in the face of the overwhelming pressures of life in America stood to be misinterpreted. Following a completely dimwitted article by conservative columnist George F. Will, President Reagan himself dropped Springsteen's name at a stump speech in New Jersey in September of 1984. In an attempt to marry Springsteen's brand of patriotism with that of his own, Reagan's campaign staff, like Will, apparently didn't take the time to listen to more than the chorus of the song. They ignored the story of a reluctant Vietnam vet returning home to find no work or compassion from the community he – in good faith, though he knew the war was a colossal blunder – fought to protect.

Perhaps it was simply good electoral math (after all, it was blue-collar swing voters who helped Reagan to the White House in 1980), but it likely stung far more Springsteen fans as ill-conceived than it did convert new listeners.

Instead of issuing a press release, Springsteen used the bully pulpit of the concert stage to respond. Throughout the following summer, local groups advocating for the homeless, the poor, laid-off industrial laborers or veterans were invited to concerts. After each show, he gave the groups between $10,000-$20,000 of the night's receipts, not to mention media attention and the singer's own personal appeal for fans to get involved in issues of hunger, homelessness and unemployment facing their communities.

He took that message global by participating in the 1988 Amnesty International Human Rights Now! Tour. It's also a challenge that was still being met as recently as this past summer, when Springsteen fans gathered to work on houses for Habitat for Humanity in his hometown of Freehold.

At the same time "Born in the U.S.A." was being hijacked by the right, John (then Cougar) Mellencamp's increasingly populist blue-collar rock was struggling with the same. Reagan tried to use "Pink Houses," again missing the cynicism about consumption and misplaced ideals the song implied. 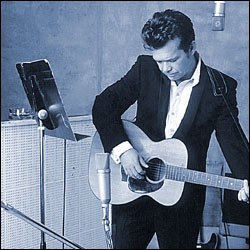 Mellencamp's calculated response to being courted by the right was similar to that of Springsteen's. By co-founding Farm Aid in 1985, he helped bring the crisis facing family farmers to national attention. The philanthropy continues to this day, raising around $1 million a year for grants to organizations addressing family farm issues. The group held its annual concert this year on Sept. 18 near Seattle, Wash.

Releasing the one-two punch of Scarecrow (1985) and The Lonesome Jubilee (1987), albums seething with anger over the destruction of rural America and the ill effect of Reaganomics on the lives of ordinary people, Mellencamp put his personal politics into words. "Rain on the Scarecrow," arguably his most important song to date, tells of a father unable to pass on anything of the family farm to his son except memories. "Ninety-seven crosses, planted in the courthouse yard/Ninety-seven families who lost ninety-seven farms," he sings in rage.

He sings with faint hope about future generations finding some purpose in the ordinary failures and shortcomings of life on "Check It Out," a hit single from Lonesome Jubilee. This hope is balanced by tunes that sketch obvious chasms in the American dream: "Down and Out in Paradise," "Hard Times for an Honest Man" and "Empty Hands." In recent years, the lingering plague of racism has been featured in Mellencamp's music.

Channeling Woody Guthrie on The Ghost of Tom Joad (1995), Springsteen also sang about the issues of race and economic disparity still facing a country 40 years past the Civil Rights Act. He continued the image with the controversial "American Skin (41 Shots)," about the suspicious New York police shooting of a black immigrant, but found faith to believe in the possibility of an America of equality, liberty and cooperation in "Land of Hope and Dreams," a tune cribbed from Guthrie's socialist hymn "This Land is Your Land."

Following the Sept. 11 attacks, both Springsteen and Mellencamp displayed prudent restraint in formulating a response. Springsteen didn't release an album until the following summer, The Rising, which dealt more with overcoming personal loss and the resilience of ordinary victims. Mellencamp, on the road at the time of the attacks, was already playing a sinister version of "Gimme Shelter" to open his shows. The warning was lost on many fans. A Sept. 13 show in Hershey, Penn., found Mellencamp uneasy, several times waiting for the chants of "U.S.A., U.S.A.!" to die down before continuing. His scathing attack on Bush, "To Washington," released in 2003, would fly in the face of such knee-jerk patriotism.

By refusing to become embroiled in partisan politics in the past, Springsteen and Mellencamp were able to let their actions and their music do all the talking, acting out the role of artist as social critic, even if that meant risking some fans would come away with the wrong ideas. They stayed, if not above, then away from the fray.

With the Vote for Change Tour, such ambiguity – all 25 years worth of it – will end. Perhaps this is an opportunity, a way to finally separate the wheat from the chaff, so to speak. The GOP has unabashed conservative hit-making schlock peddlers like Alan Jackson and Toby Keith, so perhaps Springsteen and Mellencamp will finally be left the hell alone. National Review editor Chris McEvoy recently opined, though, that Springsteen (and by association, Mellencamp) has crossed an invisible but important line into the realm of rock as politics; not just rock occasionally speaking out on issues, but rock as political policy, in effect forcing conservative fans out of the familial community their music created.

Perhaps he is right, and neither can maintain the high ground of the disengaged social critic any longer. In surrendering that power, both are taking a huge gamble, if not with their careers, then with the integrity they have fought so doggedly to keep.

"I always believed that it was good for the artist to remain distant from the seat of power, to retain your independent voice, and that was the way I liked to conduct my work," Springsteen recently told Backstreets fanzine. This time, though, he added, it's too important to sit out.