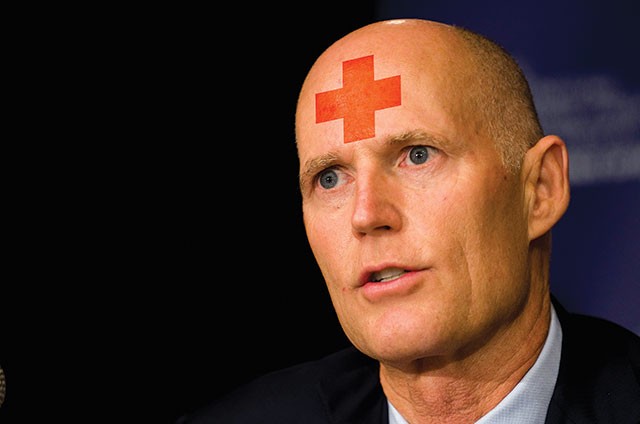 “The fraud at Rick Scott’s company hurt seniors, it hurt taxpayers, it hurt everyone. It was stealing from the American taxpayers and eroding the Medicare program designed to care for the elderly. He likes to say he wasn’t questioned but I am a witness and I was an FBI informant. Fraud was in the DNA of Rick Scott’s company from the very beginning and he was the father.”

Amount Gov. Rick Scott’s Columbia/HCA company had to pay in fines for the largest case of Medicare fraud in history

Number of criminal convictions resulting from the Columbia/HCA settlement for such activities as cost report fraud, physician kickback fraud, upcoding on inpatient admissions, upcoding on lab procedures, and inappropriate lab and in-home visits. Scott was not convicted.

You’ve got a fraud

While most of us were watching the terrible debate between Attorney General Pam Bondi and her competition on Oct. 6, an old pecuniary ghost of Gov. Rick Scott decided to drift over the horizon and into our sightlines. Rick Scott, you see, was once the same Rick Scott whose company, private hospital chain Columbia/HCA, defrauded Medicare and was duly rewarded with a $1.7 billion fine and a sense that he would never work in this town (or state) again. “He pled the fifth!” you’ve heard many a Charlie Crist ad grumble. Well, he did. And some stains – especially stains that bring with them more than a billion dollars in baggage – never completely wash out.

The occasion for this particular airing of what the Scott camp would like to refer to as “history” wasn’t a new Crist ad tap dancing around the failures of our leader, because that public blind spot has already been exploited and inexplicably ignored for years now. This was something a little more substantial. In a week that saw Crist finally gaining the polling momentum he needs for the Nov. 4 midterm election showdown, an old face – let’s call him an old friend, because that’s kind of the way he acted – popped up with a press conference to make it clear once and for all: No matter all the soft-focus positioning of an eternally awkward Scott, the skeletons in his closet aren’t dead yet.

John Schilling, the accountant who helped bring Scott’s wallet to the fire pit of cooked books back in 1993, appeared seemingly out of nowhere on television and, not so remarkably, in Charlie Crist fundraising emails. Crist’s campaign was responsible for digging Schilling up for the public runaround again. It was Schilling, you should know, who made Scott step down from his former post as head of Columbia/HCA via his accounting. Also, uh, Schilling is a Southwest Florida Republican, and those shells don’t wash up for Democrats unless there’s a good reason.

Though Scott was never personally charged for any wrongdoing in the case – somebody has good lawyers – the association has been the linchpin of most anti-Scott advertising since the good old days of 2010, when somehow he beat the “aw shucks” nowhere-ness of Alex Sink in the gubernatorial stakes.

The Miami Herald last week remembered our favorite refrain from that period via a television ad called “Truth.”

“The [former Republican Scott opponent Bill] McCollum crowd says the hospital company I started was fined by the government for the Medicare fraud. Unfortunately that’s true,’’ Scott said in the 2010 television advertisement. “I was in charge and even questioned by authorities. But that’s not what matters. What matters is that the company made mistakes and as CEO I take responsibility and learn from it.”

Such a sweetheart. However, it’s worth noting that Scott’s learning curve isn’t much steeper than his feigned rhetoric. On Oct. 8, current Democratic attorney general candidate George Sheldon filed a lawsuit against Scott for not necessarily being honest. Turns out that, according to Sheldon, Scott failed to disclose some $340 million of his net worth, opting instead to be down here with the minions at $133 million. By dint of the blessings brought by newly whittled disclosure rules, Scott has seen fit to only declare those assets that are in his “blind trust.” Ladies and gentlemen, can we please get a parlor game called “blind trust” right now?

Scott’s folks, according to the Miami Herald, are throwing up stop sticks and diversionary flares, pulling terms like “desperate attack” from their bags of political idioms. It’s likely, however, that the real desperation is coming from people who have no access to healthcare or the sly media team of Gov. Rick Scott.